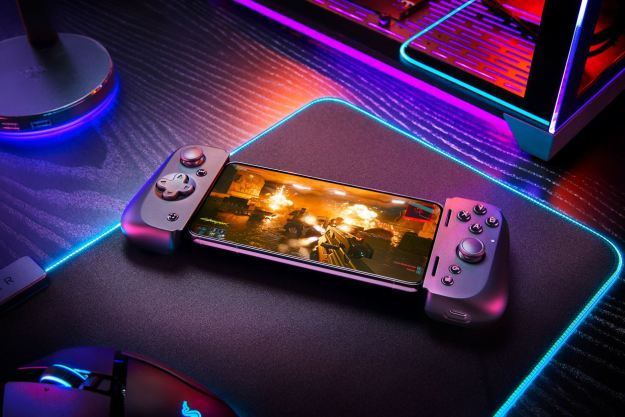 Like it or not, console-quality mobile gaming is on the rise. Not only are titles like Diablo Immortal showing that games don’t have to be pared down as much from their console counterparts, but Netflix is heavily investing in the space, and services like Google Stadia, Amazon Luna, and Xbox Game Pass allow you to literally play console games on your phone.

But unless you want to use lackluster touch controls, a good mobile controller is necessary to make console-like gaming on mobile worth it. The original Razer Kishi was already one of the best mobile controllers out there, but it had a few flaws. Razer wiped away many of those issues with the Razer Kishi V2, which was released earlier this month.

By taking some design cues from its competitor, Backbone, the Razer Kishi V2 improves upon a solid design to create an amazing mobile game controller that is nearly console quality. Although it’s a little bigger than the original Kishi, which isn’t the best for portability, I’m already sure this will be my go-to mobile gaming controller going forward.

No more stretching and squashing

The original Razer Kishi was an excellent mobile gaming controller, but it could be a pain to insert your phone into it. You had to hold down release latches so a stretchable support band could floppily fall back before you could insert the phone into the controller. It was a hassle to stretch out and squash back into place once you took the phone out. The Razer Kishi V2 does away with this issue by replacing that support band and latch system with an extendable bridge.

To put a phone into the Razer Kishi V2, one simply has to pull one side of the controller to extend the bridge and place the phone inside. It’s way easier to use and has encouraged me to use the Razer Kishi V2 more frequently for mobile and cloud gaming on my Google Pixel phone than ever before. While the more exposed bridge does leave me a bit worried that this will break in half if left floating around in a bag, its sturdy build quality does make that unlikely.

This isn’t an original concept, even if it’s the biggest draw of this new hardware. The Razer Kishi V2 is very similar in design to the other leading mobile gaming controller, the Backbone One. That controller introduced this extendable bridge and even has a very similar button layout. While I’m content with the Razer Kishi V2 copying many aspects of the Backbone One’s design because it makes the controller easier to use, its similarities mean the Razer Kishi isn’t as unique of a controller brand anymore, and the V2 is not worth it if you already own a Backbone controller. But it does cement the extendable bridge as by far the best setup for mobile gaming controllers going forward.

Regarding button layout and feel, the Razer Kishi V2 isn’t too dissimilar from the original Razer Kishi, but makes some key improvements. The microswitch face buttons (laid out like an Xbox controller) and the D-pad feel much more satisfying to click and use than on the original Razer Kishi. While the D-pad still isn’t quite as good as the one on the Xbox Series X controller, this is undoubtedly one of the best third-party controller D-pads I’ve ever felt. Its analog triggers and microswitch bumpers are well-built, making playing first-person shooter games like Doom Eternal feel better to play than they typically do on mobile controllers.

Like the original, you can even plug in a charger to the bottom-right and charge your phone while playing. Unlike the original, the Razer Kishi V2 not only has a capture button, but even lets players remap two programmable microswitch buttons near the triggers. These buttons are excellent alternatives for players who struggle with pressing the analog thumbsticks for L3 and R3 inputs, so it’s a good accessibility and utility feature.

The one big flaw of the Razer Kishi V2’s layout is the menu and Razer Nexus button placements. This button takes you to Razer Nexus, a new free app that organizes downloaded mobile games and recommends new ones for Razer Kishi owners, unlocking the full potential of the controller’s button remapping and screen capture functionalities. It’s frustratingly placed right above the start/menu button, which is used in almost every game, so I often found myself accidentally hitting the Razer Nexus button and going to that app when I just wanted to pause or start a game.

Technically, I can remap these buttons, but it doesn’t take away from the fact that this is a frustrating ergonomic design choice that could’ve easily been solved by flipping these two buttons. In its current state, the Razer Nexus app isn’t that useful unless you have many games installed on your phone and haven’t grouped them all together. Still, as it’s free to use and is needed to remap button controls, it’s worth installing if you have a Razer Kishi V2. Just keep in mind that you might accidentally open this app instead of using the menu button quite a lot when you first start to use the Razer Kishi V2.

I tested a variety of native and cloud-based games on mobile to put the Razer Kishi V2 through its paces and ran into nary an issue. Games like Stardew Valley and Shatter Remastered natively running on my phone immediately recognized the controller and played smoothly afterward. As more complex and console-quality mobile games like Diablo Immortal continue to emerge, you’re going to need a controller that can handle them. The Razer Kishi V2 looks like one of the best controllers to do that with as there’s no noticeable latency and it feels good to use.

Meanwhile, TMNT: Shredder’s Revenge on Xbox Game Pass, Bloodrayne 2 on Amazon Luna, and Doom Eternal on all proved that this is a great cloud gaming controller that won’t add much additional noticeable latency. If you’re an Xbox Game Pass Ultimate subscriber and want to see what the cloud-supported games look and play like on Android, the Razer Kishi V2 is a comfortable controller to do that with. It’ll now be my preferred controller for cloud gaming going forward, and I use many cloud gaming services frequently.

Whether you’re playing natively on your phone or through the cloud, the Razer Kishi V2 is a useful mobile gaming controller. It’s exceptionally well-built too, so I don’t expect the wear and tear that comes with frequent controller use to set in for quite some time.

The Razer Kishi V2 loses a little bit of its individuality by closely copying the Backbone One. Still, it’s an extremely well-built and highly customizable mobile gaming controller that will support your gaming habits, whether they’re happening natively on your phone or in the cloud.

The Razer Kish V2’s design is quite similar to the Backbone One, and you can’t go wrong choosing either of them.

The Razer Kishi V2 feels very strong and sturdy, so I suspect this mobile gaming controller will last you a couple of years (or at least until the Raser Kishi V3 inevitability comes out).

Yes, if you plan to start playing more video games on your phone, consider picking up the Razer Kishi V2 to enhance that experience. It’s a clear improvement over the original Razer Kishi, so it’s worth upgrading.

The Razer Kishi V2 for is available now. A version of the controller for iOS is in the works and should release later this year.

Topics
The best Xbox Series X controllers for 2023
CES 2023: ROG’s Raikiri Pro controller’s built-in screen has Dreamcast vibes
Xbox Series X tips and tricks: how to set up your new console
PlayStation VR2: specs, release date, launch games, price, and more
Best Gaming PC Deals: Save on RTX 3070, 3080, 3090 PCs
The best video game remakes reinvent the classics, they don’t just revisit them
Best Buy will give you a $10 to pre-order Hogwarts Legacy today
Save $620 on this Lenovo gaming laptop with an RTX 3070
AMD vs. Intel: which wins in 2023?
Forspoken settings: change these settings for a better experience
Add 2TB of storage to your PS5 with an SSD and save $70 with this deal
Fall Out Boy concert in Fortnite: start time, island code, and more
Marvel Snap is dangerously close to becoming a pay-to-win game