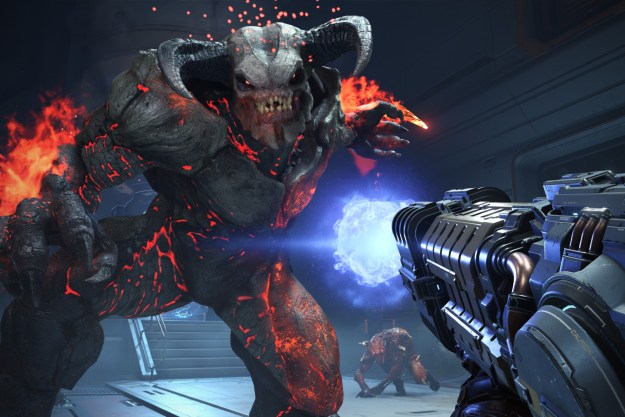 Playing Doom Eternal is like skating on the world’s most violent ice rink, zipping from enemy to enemy and eviscerating them with the grace of a gold medalist, all while chunky guitars roar in the background.

Doom Eternal is a sequel that knows exactly what worked with Id Software’s Doom from 2016. After proving it was still the master of first-person shooters, the developer took a victory lap with its latest entry, expanding in ridiculous ways to flesh out what the first game didn’t completely nail.

The Doom Slayer is here to rip and tear, and if players can master his enormous arsenal of weapons and abilities, they can slaughter demons in some of the most entertaining ways I’ve ever seen. Doom Eternal is like good fast-food — it’s simple, unpretentious, and better than competitors that tried to reinvent the wheel.

Rip and tear until it’s done

Doom Eternal, set a few years after the events of Doom, finds humanity in a situation even more dire than when a portal connected Hell and Mars. Earth is completely overrun by demons, with a link to Hell unleashing a constant stream of monsters thatkill nearly everything in their path. Only the Doom Slayer — whom the game occasionally calls “Doom Guy” — has any chance of saving the world. A god among men, he’s more than capable of delivering the pain to hundreds of demons in mere minutes, and he needs every bit of his skill this time around.

The 2016 release Doom featured its own science-fiction-meets-mythology story, but it often, sometimes literally, flipped the bird at further explanation in order to get back to the action. It was certainly in the spirit of the original game, but Id Software provides more background in Eternal.

You’ll learn more about the Sentinel creatures responsible for much of the game’s events, as well as the powerful Hell Priests whom the Doom Slayer must destroy before he can save Earth. You’ll also find out more about the Slayer himself and the link between the game’s areas, both through direct storytelling and collectible data logs.

That would have thrown a wrench in the pacing of the 2016 game, but after nearly every mission in Doom Eternal, the Slayer returns to his Fortress of Doom to upgrade or explore. It’s the perfect opportunity to read up on lore.

Of course, this is still a Doom game, and when it’s time to pick up a Super Shotgun and start blowing demons’ heads off. Doom Eternal is more than happy to oblige, with some of the smoothest and most complex combat a first-person shooter has ever offered.

After starting with a few basic weapons like a shotgun and heavy cannon, players are quickly given a massive number of tools. A rocket launcher, plasma rifle, and chain gun all work best against different demons (of which there are more than twice the types from Doom), and the chainsaw lets the Slayer get additional ammo from weaker enemies on the fly.

Even the Glory Kills finishing-move system received an overhaul because of the Doom Blade packed into the Slayer’s armor, which lets players refill health while eviscerating the spawns of Hell.

The biggest game-changers in Doom Eternal, however, are not guns or melee weapons. The Flame Belch and Ice Bomb abilities drastically alter the combat loop by providing players with a way of getting more health and armor without having to find items already placed on the ground. Those items are still available, but knowing when and who to attack in order to acquire them through kills is much more satisfying.

The Flame Belch is essentially a short-range flamethrower, and nearly every enemy is set ablaze when hit. They also drop a small amount of armor that will increase if they’re killed while still on fire, and multiple enemies can be hit with a single “belch.”

Doom Eternal does everything in its power to kill you.

The Ice Bomb serves a similar purpose, with an upgrade giving players more health when they kill an enemy frozen by its blast. Using the two moves in tandem allows the Slayer to quickly annihilate massive groups of enemies, and failing to do so consistently will leave him with low health and armor. If players want to survive in Doom Eternal, they’ll have to master all his tools.

This is especially true not only because of how Doom Eternal‘s resources are otherwise limited, but because its enemies can be brutally difficult. The cannon fodder remains, especially early on, but does everything in its power to kill you.

Revenant enemies fire missile barrages from the air while the Pinky brutes charge at lightning speed. The spider-like Arachnotron enemies can take a surprising amount of damage, while its turrets light up the Slayer. And the armored Cyber Mancubus is even more resilient than the giant Mancubus enemies from Doom.

By far the most challenging standard enemy is the Marauder, which is designed as an equal to the Slayer and sports a shield that only drops for a few seconds as he swings his ax. Whenever he appears, he deserves your undivided attention, which can be very difficult if there are still several other enemies around. After killing him a few times, it’s easier to learn his patterns, but he’s no less menacing.

He’s joined by the Archvile, a demon who can infinitely spawn other demons until he’s eliminated. When he spawns, every other objective becomes secondary, and his quick death is imperative. Thankfully, just like with the Marauder, he isn’t overused, and the headbanging heavy metal roaring during each battle keeps even repeated attempts exhilarating.

Variety is the spice of death

Doom was primarily split into two different environments: a research facility and Hell itself. Doom Eternal has much more range, with Hell-infected Earth, a space defense station, Hell proper, and even foreign worlds all filled to the breaking point with demon. The vistas Id Software creates are gorgeous, making it hard for the Slayer not to spend a few moments marveling at the views before returning to his regularly scheduled slaughtering.

These areas are often filled with platforming challenges, requiring midair redirection and careful timing to make it across wide gaps. They can be clever uses of abilities otherwise reserved for combat, but Doom Eternal does lean a little bit too heavily on jumping puzzles during the game’s last few hours. Dialing them back, if only slightly, would have helped the game from feeling about one mission too long.

Whenever the Slayer isn’t jumping on platforms or upgrading his abilities in the Fortress of Doom, he’s nearly always murdering demons. There is very little opportunity to breathe, and that would be a problem in nearly every other shooter. But this is Doom Eternal, and the elated feeling players will get after spending a few minutes leaping between enemies and slicing them limb from limb makes the extended battles a joy.

A nearly permanent smile appeared on my face while fighting, even in certain areas that gave us trouble because Id Software never throws enemies at the Slayer merely to make things difficult. It’s all in the service of fun and a massive power trip that epitomizes the spirit of the Doom series.

A nearly-permanent smile appeared on my face while fighting.

Doom Eternal is a bigger and even better version of its predecessor, recognizing exactly why fans loved that game so much while giving them even more reasons to love the sequel. As of right now, only its single-player content is live, but if Battlemode is anywhere near as addictive and empowering as its campaign, Id Software has made one of the best first-person shooters of the generation.

If technology were up to the task back in 1993, this is the game John Romero and John Carmack would have made from the beginning.

No. Doom Eternal is better than the already-excellent 2016 game, and its spin on old-school shooter gameplay is unique among modern shooters.

It will take between 15 and 20 hours to beat the campaign on the standard “Hurt Me Plenty” difficulty.

Yes, unless you aren’t a fan of gore. There’s a lot of it.

Topics
Doom Eternal’s The Ancient Gods — Part Two DLC is coming tomorrow
The best Doom Eternal mods
All Doom Eternal cheat codes and where to find them
Fall Guys gets a set of weirdly adorable Doom costumes
Best Gaming PC Deals: Save on RTX 3070, 3080, 3090 PCs
The best video game remakes reinvent the classics, they don’t just revisit them
Best Buy will give you a $10 to pre-order Hogwarts Legacy today
Save $620 on this Lenovo gaming laptop with an RTX 3070
AMD vs. Intel: which wins in 2023?
Forspoken settings: change these settings for a better experience
Add 2TB of storage to your PS5 with an SSD and save $70 with this deal
Fall Out Boy concert in Fortnite: start time, island code, and more
Marvel Snap is dangerously close to becoming a pay-to-win game