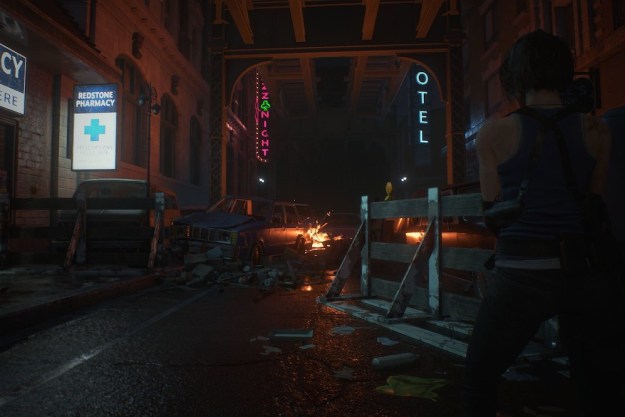 “Resident Evil 3 is uncomfortable but exhilarating. There’s a thrill in the danger, like roaming a haunted house or riding a roller coaster.”

There’s no way Capcom could have known its Resident Evil 3 remake would release in the middle of a global pandemic. But it has, and that might help make it the most terrifying game you’ll play this year. And that’s why it’s so awesome.

I found this game truly frightening. With my heart racing, I used caution when entering rooms, checked all angles for any signs of possible danger, and listened intently to my headset for clues to where monsters might await.

It’s not just the pandemic. Sure, the opening does mention the words pandemic, quarantine, and CDC (Centers for Disease Control and Prevention), all of which we’ve all heard countless times in the news lately. In Resident Evil 3, however, the illness (known as the T-Virus) is man-made. You play as Jill Valentine battling a health threat, along with your fellow man.

Your nemesis is, well, Nemesis

The relentless disease is embodied in Nemesis, a ferocious creature that pursues you throughout the game. A fan favorite from the original Resident Evil 3, Nemesis ranks among the most iconic horror game villains. That’s for good reason.

Nemesis, and other foes, will give you jump scares aplenty. At one point, a monster jumped out and implanted larvae down Valentine’s throat, which she had to vomit out of her system. As Valentine, you’ll wander the streets of Raccoon City, facing horrors like this among the vestiges of once-vibrant homes and stores, often guided by just the glow of a flashlight.

I often found myself thinking, “Why am I playing this game?” Yet I couldn’t put it down.

Resident Evil 3 is uncomfortable but exhilarating. There’s a thrill in the danger, like roaming a haunted house or riding a roller coaster. And absolutely brings the thrill.

Just when you think Nemesis is down, it gets right back up, even stronger — a lot like an ever-mutating virus. No area feels safe. That zombie that was lying motionless a second ago? It just might start to reanimate when you let your guard down.

The only places of solace are the safe rooms where you can save your progress. This is where I found a feeling of calm come over me each time I opened the door, especially in new areas, when I didn’t know what was on the other side.

It’s pretty beautiful, albeit in a dark, haunting way.

This tension is heightened by excellent music. Much of the game is fueled by a series of ever-escalating strings. It’s reminiscent of the ambient sounds of a horror film preparing for a jump scare, only constant. However, when you enter a safe room, everything changes. It’s always well lit, and a soothing piano medley begins.

The only other reprieve from the constant sense of peril is the removal of the original’s game’s fixed camera. The inability to look around and take in your surroundings ratcheted up the original’s tension, but it just wouldn’t fly in a modern title. It’s a necessary and appreciated upgrade.

Capcom has upgraded the visuals, as well. Resident Evil 3 is a remake, not a remaster, and the all-new look is truly astounding. It’s beautiful in a dark, haunting way. The design of Nemesis is incredible, especially as it continues changing form.

Valentine also gets a new millennium makeover, finally ditching the tube top for a more realistic tank. I have nothing against tube tops as a garment, but as a woman playing the game, it was jarring to see Valentine fight for survival in the least practical clothing possible. It would immediately break my suspension of disbelief, and in a game filled with zombies and fantastic physical feats performed by the protagonists, that’s saying something.

Instead, we’re treated to two playable protagonists you switch between as the game progresses. Technically, they’re on opposing sides, as Valentine works for special forces team S.T.A.R.S., which is investigating the Umbrella corporation for its role in the T-Virus spread. Carlos, the other playable character, works for Umbrella, but the two still join forces. It doesn’t matter who signs their paychecks. They want to help others.

They’re not going to win Resident Evil 3 an award for best game writing, but their dynamic works, especially in . This is a horror game. It needs straightforward, strong characters.

By the end, I no longer questioned why I was playing the game. I was left with a feeling of satisfaction, which is exactly what a great game should do, regardless of whether or not it has a happy ending.

Aside from the story mode, Resident Evil 3 adds a multiplayer option called Resident Evil Resistance, which is an online 4 vs. 1 multiplayer experience. I need to spend more time with this mode to reach a verdict, and I’ll share more later.

Resident Evil 3 is a solid game. It doesn’t reinvent the wheel, or its own plot for that matter. But the gameplay is smooth and exhilarating, the plot is well laid-out, and, possibly most importantly, it’s fun.

Since the original Resident Evil 3, titled : Nemesi,s came out in 1999, there’s been a bit of a renaissance for zombie games, most notably with The Last of Us. That’s probably the best alternative out there, but they can both exist and be enjoyable games in the same player’s collection.

Resident Evil 3 shows its age a bit in playthrough length. You’ll easily beat it under 10 hours, and that’s likely because the 40-plus hour sagas we’ve grown accustomed to weren’t the norm in the ’90s.

Yes, unless you’re really not into the horror genre. It’s fun and well-made. I would especially recommend it if you’re a big fan of the original or missed the boat and wish you hadn’t. Fans of last year’s Resident Evil 2 remake will also likely be pleased with this release