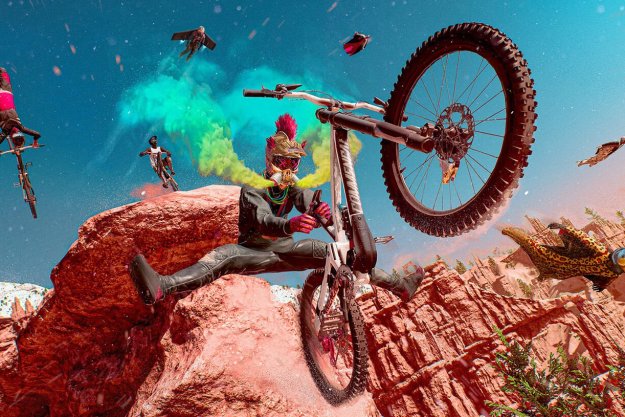 “Riders Republic is a consistently entertaining extreme sports game that avoids the compulsory trappings of most open-world games.”

Ubisoft’s open-world games can be a chore. Franchises like Assassin’s Creed and Far Cry follow the same structure, throwing players into a gigantic map with a seemingly endless number of activities to complete. These are massive games filled with distractions that keep you playing even when you’ve stopped having a good time. But Riders Republic, the publisher’s latest title, wields that power for good; it removes all compulsion from one of gaming’s most tired ideas.

Developed by the team behind Steep, Riders Republic is an open-world extreme sports game that’s not structurally far off from Assassin’s Creed Valhalla — just with bikes instead of longships. A big world with a laundry list of icons to bounce between? That’s exactly what you’ll find here. The key difference, though, is that I found myself actually wanting to complete activities, not feeling like I had to. Who cares if a game has a million things to do if they aren’t actually enjoyable to complete?

Riders Republic works because it never forgets to be fun above all else. Whether it’s asking players to wingsuit through a canyon or bike down a mountain alongside 31 other players while wearing a giraffe suit, every micro challenge is a quick and digestible hit of extreme sports joy. It’s not the deepest experience, but it’s one I was happy to pop into for an hour at a time and leave just as easily without feeling pressured to continue on.

Riders Republic is, essentially, a much goofier spin on the Forza Horizon series. Players are dropped into a huge map made up of California state parks Frankensteined together into a natural sports utopia. The only real direction they’re given is to start competing in different events — there’s biking, snowboarding, skiing, jetpacking, and wingsuiting to be done — and earn enough stars to reach the ultimate Red Bull-sponsored race. The game doesn’t really care what you do once it cuts you loose — and that’s a relief. I’ve never felt so free in a genre that’s supposedly built on freedom.

There’s a simple, but effective hook here. Just about anything players do grants them stars. Complete a race? Get a star, even if you place dead last. Discover a landmark on the map? Take a star. Accidentally pull off a stunt while exploring? Here’s your star. It doesn’t matter if you’re good at the game or just there to mess around; Riders Republic will make sure you feel like you’re progressing no matter what. No activity feels like a waste of time or something you have no choice but to muscle through.

That hook works as well as it does because the moment-to-moment sports gameplay is so easy to pick up and play. Riding a bike or skiing is as simple as accelerating and steering. Certain equipment can drift, boost, or pull of tricks, but nothing ever feels overly complicated. The effectively simple mechanics put focus on what’s important: The sheer thrill of zipping around an open world with full freedom. There’s such delight in flying through a canyon with a jetpack and instantly switching to a snowboard, then plummeting out of the air to slide down a snowy mountain below.

The only spot where the game gets tricky is in its control options. Players have a few different control schemes, but there are two primary ones. One maps tricks to face buttons, while the other (called Trickster) let’s players use the right stick instead. The latter feels much better, giving players much more precise control when it comes to executing and landing tricks. Unfortunately, that means sacrificing camera control, which isn’t always feasible. Considering that the game gets chaotic with its massive multiplayer races, there were times when I really needed to adjust the angle to see over the herd of riders wearing long giraffe costumes that engulfed my field of view. You also get more points on tricks if you land them yourself in Trickster mode. It’s a shame that the more natural and rewarding control scheme is the less practical one.

No matter what sport I’m doing, the controls feel intuitive enough that I can navigate around the intricately designed world with ease.

It’s a small complaint in the grand scheme of things. No matter what sport I’m doing, the controls feel intuitive enough that I can navigate around the intricately designed world with ease. The landscapes are carefully constructed to turn simple stretches of terrain into bike paths or snow trails that put my skills to the test, even when I’m just freely riding around. You could take all of the actual goals and objectives out of Riders Republic and I still think I’d be happy to just simply drive around and soak it all in (there’s a Zen mode included where you can do exactly that, too).

There’s no shortage of things to actually do, putting those pleasurable mechanics and smart world design to good use. Players compete in different challenges that appear around the map as they level up each “career.” Most of the events revolve around races of some kind, but there’s some added spice here and there. One of my favorite missions asked me to bike around a small campsite delivering pizzas while my character complained in Italian the whole time.

Riders Republic is at its best when it’s being goofy. While standard races are consistently fun tests of skill, some of the weirder missions bring absurd charm to the game. In one race, I’m snowboarding through a blizzard while classical music plays. In another, I’m in a pack of bike riders dressed in inflatable T. Rex suits. You never know what any given challenge will look like until you start the race, and that had me trying as many as possible out of sheer curiosity.

The solo play would be enjoyable enough on its own, but the game’s social integration really makes it special. While playing, the map is constantly populated with other players going about their business (or at least ghost data from real people). It’s impossible to feel alone while driving around. Sometimes I’d find myself wingsuiting down a mountain to a race marker, only to fly over a bike race in progress. It’s rare that I really feel like I’m part of an online world full of people, even when playing a 100-player game like Fortnite.

The solo play would be enjoyable enough on its own, but the game’s social integration really makes it special.

That sensation is best exemplified in the game’s Mass Races, which are a standout feature. At various intervals, players can queue up for a 64-player race. It’s absolute chaos in the best possible way. Seeing a mass of bikers all slamming together at the starting line is pure slapstick comedy, and getting ahead of the pack is an exhilarating feeling. They also tend to be some of the game’s longer gauntlets, functioning as a multisport triathlon. Every time one pops up on the map, I stop what I’m doing to participate.

Other online modes are just as creative. There’s a brilliant 6-vs.-6 trick attack mode that functions like a team version of graffiti from Tony Hawk’s Pro Skater. Considering that this is a live service game that’ll likely be updated over time, I’m already excited by the possibilities here. That’s what makes Riders Republic especially fun. This is a firm, wacky foundation that feels like it could be twisted in an endless number of ways. Even if Ubisoft doesn’t, the game includes a creation tool that lets players make their own custom events. Keep giving me a reason to load in and I’ll keep biking until my legs (well, thumbs, I guess) are sore.

The most in-your-face aspect of the game is its sense of style. While the game’s spiritual predecessor, Steep, was a bit more down-to-earth, Riders Republic is all about pizzazz. The colors are bright, the cosmetics are wacky, and the soundtrack is eclectic. It’s an all-around joyous vibe built for players of all ages.

It’s all a little unfocused, though. Playing through the game, I was never quite sure who the intended audience actually is. Take the soundtrack, for instance. It doesn’t just just between genres, but eras as well. One minute I’m listening to a pretty modern-sounding pop rock song. The next minute, Ice-T’s 1988 hit Colors starts playing. Later, I’m parachuting as a ukulele cover of Gangster’s Paradise plays, followed by The Offspring’s Staring at the Sun. Sometimes the soundtrack is trying to be hip and youthful. Sometimes it’s trying to be Tony Hawk’s Pro Skater. Other times, I have no idea who it’s aimed at.

That’s present in the dialogue too, which tries to sound young and hip, but ends up sliding into cringe territory. Jokes consistently fall flat, as non-player characters dip into “for shizzle”-era MTV humor. It all has a “How do you do, fellow kids?” vibe to it that feels a little alien.

Then there’s the game’s cosmetic shop, which opens up the dreaded microtransaction conversation. While some clothing and items can be bought with in-game currency, others can only be purchased with real money. Those more premium items are mixed in with everything else, though, which feels needlessly deceptive. I’d often see a piece of clothing I dug in the shop, instinctively click it, and realize that I needed real money to buy it. Considering that this is a full retail game, the reliance on microtransactions here feels a little aggressive — especially since kids are a likely target audience here.

Playing through the game, I’m never quite sure who the intended audience actually is.

I enjoy Riders Republic the most when I simply ignore those aspects altogether. The free and fluid pace of the game means I can turn the volume down and put music or a podcast on in the background. I don’t mean that as a knock against the game; it speaks to how strong the core gameplay is. The fact that I can tune out the loudest parts and still feel like I’m getting the full experience is impressive. Riders Republic gives you the freedom to play it your way, and that includes the freedom to disengage from the things you don’t want to do.

Riders Republic makes the best use of Ubisoft’s open-world template. It’s a consistently fun extreme sports game with tons of variety, a wealth of challenges to chase, and excellent social hooks. All of its sporting events are easy to pick up and play, making it perfectly suited for quick drop-ins. Its sense of style is a little out of whack and it doesn’t have the most elegant camera solution, but I’m always eager to fire it up and see how much more it can one-up its zaniness.

That depends on how much time you want to put into it. It feels like there’s well over 100 hours of content here for die-hards who want to play it like a service game. Even just getting to the proper endgame will likely take you past the 30-hour mark.

Yes. Riders Republic is just plain fun. Few games this year have given me such simple pleasures that make me want to keep playing.