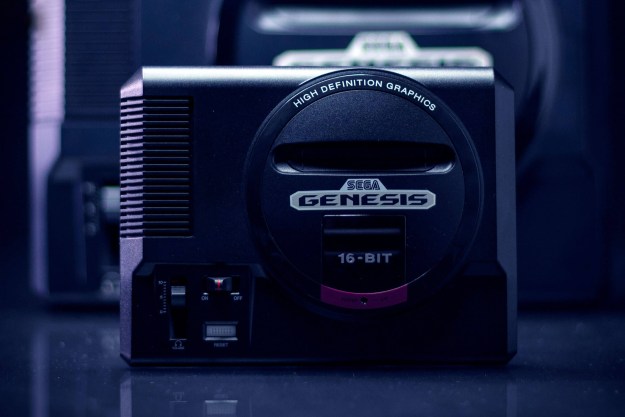 The Sega Genesis Mini is a success on numerous fronts. It far exceeds the build quality of the numerous third-party knockoffs that preceded it, artfully recreating the iconic hardware in pint-sized form. The Genesis Mini really is an authentic tribute to Sega’s heyday, and unboxing it transported me back to the mid-90s when I first received a Sega Genesis as a gift.

In addition to looking and feeling the part, the Sega Genesis Mini features superb emulation and a towering library of games. This is a retro console that has appeal for both the dedicated Sega fan and the casual player who merely wants to relive their childhood with friends and family on the couch.

Honey, you shrunk my Sega

I’m not going to apologize for that reference to Honey, I Shrunk the Kids. That amazingly silly movie released the same year the Genesis hit the market, so it feels appropriate. The Sega Genesis Mini is what you’d get if Wayne Szalinski pointed his shrink ray at your beloved Sega Genesis. Coming in at approximately 6.5″ x 5″, the Sega Genesis Mini is exactly what we’ve come to expect from these retro mini consoles.

This is as plug and play as it gets.

Designed to mirror the original North American model, the Sega Genesis Mini has an on/off toggle and operable white reset button. It probably would’ve been easier to just go with a normal button similar to the design of the second Genesis model, but Sega obviously wanted to make this a trip down nostalgia lane.

Even the features that are just for show are charmingly accurate to the original. It has a non-operable volume slider, miniature cartridge slot with a spring-loaded cover, and even the expansion port where the Sega CD and 32X add-ons would go.

The Genesis Mini hooks up to a TV via the included HDMI cord and gets its power from USB adapter. I was up and running about a minute after taking it out of the box. This is as plug and play as it gets.

You get a pair of three-button wired controllers with the Mini. Thankfully, these USB pads have six foot cords, so there’s probably no need for an extender. The three-button controllers are just about exact replicas of the originals. If I didn’t know Sega had just manufactured these, I would’ve thought they were extremely well-kept originals.

The Sega Genesis Mini has an extremely impressive lineup, both in quantity and quality.

The eight-directional pad is still better than a fair number of modern d-pads, while the A, B, and C buttons are as mushy and distinct as I remembered. I do wish Sega had opted for the updated six-button pad which had a better shape and overall feel, but I understand that wouldn’t have lined up with the console design. However, ahem, Retro-bit does have an officially licensed six-button controller for sale.

Controllers have come a long way since the ’90s. This isn’t a knock on Sega because the Nintendo and Super Nintendo controllers had the same problem, but it took console manufacturers longer than you’d expect to create a controller that’s comfortable for long play sessions. The Genesis controller has what is needed to play the included games, but if I had the option to sync up a modern gamepad, I definitely would.

The gang’s all here

What’s a great mini console without great games? The Sega Genesis Mini has an extremely impressive lineup, both in quantity and quality. Getting dangerously close to the combined library size of the NES and SNES Classics, the Sega Genesis Mini features 42 games. 40 of them are Sega classics, while the once Genesis-bound Tetris and arcade shoot ’em up Darius sweeten the pot.

Here’s the full list of games, which includes many of the very best Sega Genesis games:

Officially licensed Genesis retro consoles have included some of Sega’s biggest hits, but they’ve never received such a wide variety of certifiable classics. The ones that stood out for me were Castlevania: Bloodlines, Wonder Boy in the Monster World, Streets of Rage 2, both Mickey games, Contra: Hard Corps, Gunstar Heroes, and Mega Man: The Wily Wars, which compiles the first three mainline Mega Man games. I spent considerable time with each of these games and would recommend the Mini for these alone.

The emulation was handled by M2, a Japanese developer known for developing high quality re-releases of classic games. M2 did a marvelous job. I tested all 42 games over the past month, and I can safely say that each one runs brilliantly.

The Sega Genesis Mini’s library is every bit as good as the SNES Mini.

As with a lot of games from the 16-bit era, some of the selections, like Golden Axe, don’t hold up well at all. Others like Kid Chameleon and Alex Kidd weren’t good to begin with. The Genesis Mini reaffirmed my disdain for Sonic, but I know many will buy the console for Sonic’s first two adventures alone. The library really demonstrates how Sega was able to keep pace with Nintendo at the time — there’s a lot to love here.

Catchy new chiptune theme music composed by Yuzo Koshiro hums in the background while browsing for a game. The renowned composer worked on the original soundtracks for games like Streets of Rage 2 and Beyond Oasis. The original box art icons can be arranged in alphabetical order, by genre, release date, or player count. If you change the language, you’ll see the box art and titles for different regions. You can also switch the perspective of the tiles to browse games by the spine instead.

Games can be played in 4:3 or widescreen. When playing in 4:3, you can choose between three borders, including a generic black background and a Sonic background. A CRT filter can also be applied in either display setting, though I preferred to play with the crisp HD look.

While playing a game, you can hold the start button to pull up the save state menu. You can have four separate saves per game and load them right there from the menu. Unlike the NES and SNES Classics, you can also reset the game or return to the main menu without resetting the console. It’s a great feature to have while bouncing back and forth between games.

The Genesis Mini does have one fairly big downside, though. You cannot rewind games — a feature that is commonplace in emulation nowadays. So you’ll have to save frequently when you’re having trouble. I’m not sure if you remember, but a lot of these games are pretty challenging. A rewind feature would’ve been a great addition.

The Sega Genesis Mini comes with a one-year limited warranty covering everything in the box, including the controllers, HDMI cord, and power supply.

Sega’s foray into the miniature console market is a smashing success. The Sega Genesis Mini faithfully recreates the design of the original Genesis. It’s a charming little plug and play that works exactly as advertised. The game library is equally as impressive, compiling 42 classic games emulated with stunning accuracy. Save states and main menu shortcuts make the Mini breezy and convenient to use, but we wish Sega had included a rewind feature.

No, the Sega Genesis Mini is the best and most affordable way to play these classic Sega Genesis games. It’s also at least as good as the SNES Mini, though your pick between the Sega and Nintendo retro consoles will have more to do with nostalgia than objective quality.

We spent about 30 hours with the Sega Genesis Mini for this review. With 42 games included, there’s hundreds of hours of playtime to be had.

Yes. The Sega Genesis Mini is an awesome blast from the past.

Topics
The best iPhone games in 2023: 31 games you need to play right now
Goldeneye 007 comes to Game Pass and Nintendo Switch later this week
Xbox and Bethesda’s Developer_Direct: how to watch and what to expect
The best RPGs for the Nintendo Switch
The best ultrawide monitors for 2023
The best Xbox One controllers for 2023
The best SSDs for 2023
WWE 2K23 brings the pain with John Cena, Cody Rhodes, and Bad Bunny
The best gaming PCs for 2023: Dell, Origin, Lenovo, and more
You can turn off Frey and Cuff’s banter in Forspoken
The best Xbox Series X and Series S deals for January 2023
This Alienware gaming PC with an RTX 3090 is $520 off right now
NBA All-World aims to replicate Pokémon Go’s success starting today