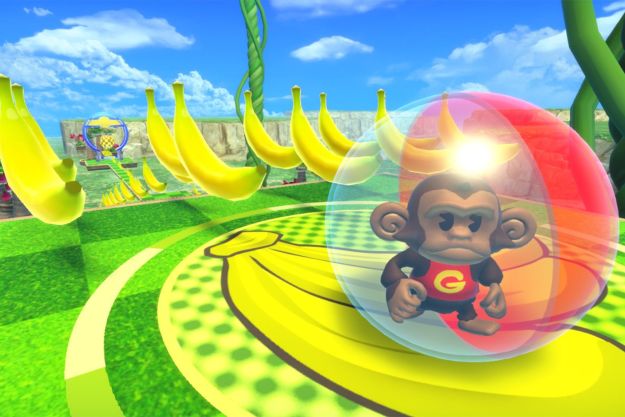 Even though it’s been 20 years since the release of the original Super Monkey Ball, the game continues to hold true to its arcade roots. This coin-op influence can still be felt in Super Monkey Ball Banana Mania, the franchise’s latest installation.

I went into Banana Mania expecting the best. Super Monkey Ball was a staple of my childhood: I spent many an hour crowded around the TV with my younger sister, passing the controller back and forth as we attempted to fudge our way through the Expert-level stages. We’d shout at each other as we blasted our monkeys in Monkey Race and knocked each other off the stage in Monkey Fight. We’ve both played the original game so many times that it’s mostly muscle memory at this point. In stark contrast, I played Banana Mania mostly alone, curled up on my sofa and attempting to figure out each stage by myself.

While the game is undeniably Monkey Ball, it felt like Monkey Ball through a filter: Distorted and just different enough to throw me off my game. It’s more akin to a chore than a fun throwback.

Banana Mania pulls its narrative and many of its stages from Super Monkey Ball Deluxe‘s story mode. Friendly monkeys AiAi, MeeMee, GonGon, and Baby simply want to enjoy some bananas, but the nefarious Dr. Bad-Boon steals all of them, sending the monkeys on a journey across the game’s world to get their yellow fruit back. The story plays much less of a role than it does in Deluxe; there’s no dialogue and very little actual story content. It’s more of a sickeningly cute loose thread that connects the game’s themed worlds together. After seeing the first few short cutscenes, I found myself wanting to skip them and just get on with the stages. Narrative isn’t really a strong (or necessary) part of Monkey Ball. The complete courses of Monkey Balls 1 and 2 are also considered part of the main game and are labeled as “challenges”.

Gameplay retains the arcade-y, point-focused feel of the original titles while making a few tweaks to ensure that Banana Mania doesn’t seem like it was ripped from an arcade cabinet. I no longer had to worry about using all of my lives or losing my points after falling off of a stage too many times, which made things easier. The stages range from frustratingly satisfying to simply frustrating: Nothing compares to that Dark Souls-like feeling when you finally make it through a tough stage, but more often than not, you’ll probably just want to spam the new Helper Mode or use points to skip stages. The game aims to remove many of the frustrations that come with getting stuck on a particular stage, but make no mistake, Banana Mania is just as tough as the other games in the series.

All the same, the toughness often feels unfair. Much of the timing-based level design of Deluxe doesn’t hold up in 2021, and the new stages are more gimmicky than challenging. The controls feel both too stiff and too touchy, and fighting the camera was frequently harder than actually completing a level. The challenge courses from Monkey Balls 1 and 2 feel mostly the same, but the physics and movement potential are just different enough that my GameCube muscle memory failed me. It doesn’t feel improved, just different.

The game includes a variety of “party games” from series history. These minigames range from the more traditional, like Monkey Bowling and Monkey Soccer, to the more off-the-wall, like Monkey Dogfight and Monkey Boat. The games range in quality, too, from pretty good to awful. Monkey Billiards is a lot of fun, and the A.I. is powerful enough that it keeps you on your toes. It also includes a new UI that helps you line up your shot better than ever. Monkey Baseball, a simplified form of baseball that plays a lot like the Toy Field mode in Super Mario Baseball, is also fun once you get the hang of the stiff controls.

The game includes a variety of “party games” from series history. These minigames range in quality, from pretty good to awful.

On the other hand, Monkey Boat is terrible. Despite the HD and 4K upscaling, the water textures retain that GameCube-era transparency, and the courses are boring in both visuals and gameplay. Monkey Target disposes of all the fun of the original by distorting the controls to the point where it’s almost impossible to land on the targets, making it an exercise in frustration more than anything. Most of the other games are simply … fine. A lot of them include now-archaic meter-based mechanics to determine strength, which feels antiquated in the era of motion control.

If you’re tired of the main story and the party games, you can spend a little time decorating your monkey and trying out new modes. The game includes a large number of playable characters from Sega history, including Sonic and Tails, Kazyma Kiryu from Yakuza, and Beat from Jet Set Radio. There are a variety of costumes and ball styles that can be purchased with points obtained through the main game and party games. The shop also sells unique stages that come with different modes that do everything from reversing the start point and goal area of stages to turning the normally point-granting bananas into items to be avoided.

Banana Mania is pretty generous with its points: I was able to buy just about anything I wanted in the store simply by playing a few of the main story worlds and each of the party games once. The costumes are cute, and I do like customizing my monkey.

The devil is in the details

In many places, the game has made a conscious decision to tweak or adjust details from the original Monkey Ballgames, particularly when it comes to sound. While some of the sound effects are nostalgic, others have been removed altogether — why is there no longer a sound when your monkey’s ball moves extremely quickly? The announcer voice-over is also a little annoying, though that has never been Monkey Ball‘s strong suit. (Why does it pronounce “foul” like “foal” in Monkey Baseball?!) One thing that was the series’ strong suit has been totally bungled here: The music. Banana Mania‘s soundtrack is utterly forgettable and pales in comparison to the funky grooves of the original Super Monkey Ball. Do yourself a favor and grab the original soundtrack DLC for $5.

One thing that was the series’ strong suit has been totally bungled here: The music.

You’d think that in an HD remake, it would make sense to raise the original game’s environments to the standard of today’s Switch games at the least, but the environments look exactly the same as in the original game, just sharper. In many cases, this means that part of my screen was taken up by a vast, HD expanse of relative nothingness. I would have loved to see more detail or at least some upgrades to the 20-year-old Super Monkey Ball worlds of Monkey Mall and Desert, but they look essentially the same, and that’s not a great thing.

Super Monkey Ball: Banana Mania should include everything fans love about the series: Skill-based difficulty, great music, fun minigames, and excellent replayability with a good group of buddies by your side. Unfortunately, this collection feels like a rushed remake that throws out the precise controls and stellar music of the original titles. The charm and fun gameplay of the original games are still there, but this remake doesn’t feel like much of an improvement over the classics.

Super Monkey Ball games are infinitely replayable, and Banana Mania is no exception. The game includes online leaderboards and time rankings, meaning that players who really want to grind out the best times will have lots to do. Those who are less competitive are better off sticking with party games’ local multiplayer.

Yes. If you’re new to the series and looking to give it a try (or don’t own a GameCube or Wii), Banana Mania is worth trying, if only to experience the original stages and music. But if you’ve never been curious, this imperfect remake won’t sell you on the series.

Topics
Pokémon Scarlet and Violet: 8 tips and tricks to get started
The Callisto Protocol won’t launch in Japan due to its rating
The best Sonic fan games
Fire Emblem Engage: release date, trailers, gameplay, and more
MLB The Show 23 returns to Xbox, PlayStation, and Nintendo Switch this March
How to charge a Nintendo Switch controller
Best gaming laptop deals: Save on Alienware, Asus and more
Best Alienware Deals: Save on gaming laptops, PCs and monitors
The best video games of January 2023: Hi-Fi Rush, Dead Space, and more
With Valiant Hearts: Coming Home, Netflix finds its video game voice
The best guns in Dead Space
The Crew Motorfest brings a racing festival to Hawaii this year
The best skills to inherit in Fire Emblem Engage