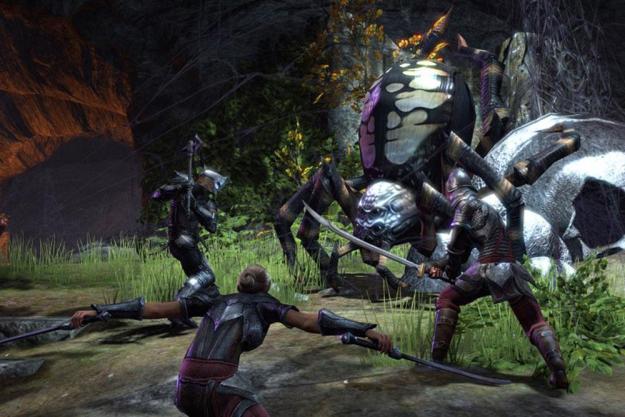 Note: With many upgrades and expansions, The Elder Scrolls Online has become worth playing in 2021.

In Tamriel, Hell is definitely other people. Like all Elder Scrolls games, The Elder Scrolls Online is massive. Anyone that’s lost a few weeks to Oblivion or Skyrim can attest to the series’ sprawling nature, but imagine spending your time in an awe inspiringly big world, exploring for weeks at a time, surrounded by people with names like “Likes-to-Fart.” It’s a bit jarring, but despite that, Bethesda and ZeniMax Online take what you expect from the Elder Scrolls series, then still deliver on everything you might expect from the MMO genre on top. For better and worse.

Putting aside the size of the games, it’s the look, feel, and lore of the franchise that are often considered the most important aspect of the Elder Scrolls series. TESO certainly understands that. Some of that’s lost in translation though, and it’s a loss keenly felt.

The lore is still there, supported by the three-way war between the Daggerfall Covenant, Ebonheart Pact, and Aldmeri Dominion alliances. The world is just as immersive as ever, but there’s something off-putting and jarring about gold spammers flooding the zone chat in the corner, combined with other players like a barely clothed Khajiit running around. Even the best built worlds can fall to abuses and annoyances inflicted by others. A lot of this can thankfully be ignored with smart chat filters and careful maintenance of contacts and guilds, but it’s always there seeping in from the edges.

That said, other people can be helpful when wandering around alone in caves and other areas – assuming they decide to help. There’s about an equal chance that they’ll just ignore whatever’s attacking you in favor of slipping past quietly to loot a rune, or gather ingredients rather than helping out. This can be troublesome when trying to tackle slightly more difficult enemies. It’s a familiar problem with most MMORPGs, and one that TESO shares.

The gear is fairly straightforward, and the combat itself is incredibly satisfying.

You can always take on enemies all by your lonesome though. The gear is fairly straightforward, and the combat itself is incredibly satisfying. Dashing about, slicing and dicing before dropping a spell… It lends itself to a more appealing engagement over your typical MMO hotbar experience, even though it borrows some aspects of it for specific skills. The number of available active abilities makes it feel like you can play however you want. You can smash fools with a giant mace as a Sorcerer, or pick them off with a bow as a heavily armored Templar. Nothing’s stopping you. Character creation is easy too, which increases your options.

The sheer amount of skills does prove troublesome when building a character, however. There are so many options between active and passive, class and weapon skills, and other complexities that it’s a little overwhelming. There’s no handholding here from the game; players can place each skill point into whatever they’ve unlocked. This means that any given character’s effectiveness can vary wildly from powerhouse to near uselessness. There’s a lot of trial and error at work, which can mean lots of wasted points.

For the most part, it’s simple enough to find a mix of passive and active skills that makes for an effective character. You can achieve this through a gut feeling more than a strictly math-based approach, but you’ll need to keep a close eye on the skills unless you plan on spending some gold for a reset – which you may end up doing anyway until you learn what works and what doesn’t.

Putting aside any issues with the game design, the biggest problem with TESO is the number of bugs that plague the experience from start to finish. During the course of my review there were quests that failed to trigger appropriately, NPCs that never appeared, UI issues that froze the game or made it jump and jerk, and a level of general jankiness that was both disappointing and completely expected. All these things are likely to be patched out over time, but there’s nothing at all fun about having to log out and log in repeatedly just to talk to someone about a subplot.

The biggest problem with TESO is the number of bugs that plague the experience from start to finish.

This is unfortunately enough of a problem that it will probably cause a number of people coming from the traditional Elder Scrolls camp to write the whole game off before really experiencing it. Those familiar with the ups and downs of MMOs will dismiss some of the more obvious complaints out of hand – it’s just the way the genre functions, unfortunately. Things will be broken until they’re fixed, but they usually do get fixed eventually. That’s the argument, anyway. The reality is a bit more frustrating.

Yet the game is very much an Elder Scrolls title, and exploration is incredibly rewarding. What’s down the cove there? How about on the top of that rock formation? Checking these places out is encouraged by the placement of Skyshards, items that grant a skill point each time you collect three of them, along with randomly generated chests and crafting ingredients.

Then there’s the fantastic player-versus-player system that has the three alliances fight in a battlefield for control of towers, which in turn controls which alliance has power over the empire. There’s even a special Emperor position for a single person from each alliance when they’re in control, and that alone makes the whole experience fascinating.

The Elder Scrolls Online is definitely a weird amalgamation of disparate parts, but it’s one worth giving a shot. The two halves – Elder Scrolls and an MMO – don’t quite make a whole just yet, but it’s clear that ZeniMax isn’t giving up. The world as it exists is a fascinating place full of adventure and wonder, with many of the bells and whistles that people fell in love with when they first played the franchise. The only question is whether or not players find a reason to stick around long enough to find what it is they want out of the game.

Topics
The best upcoming Xbox Series X games: 2023 and beyond
Tomb Raider returns as a mobile roguelike via Netflix
MLB The Show 23 returns to Xbox, PlayStation, and Nintendo Switch this March
The best iPad Pro games in 2023: the 26 best ones to play
With Valiant Hearts: Coming Home, Netflix finds its video game voice
The best guns in Dead Space
The Crew Motorfest brings a racing festival to Hawaii this year
The best skills to inherit in Fire Emblem Engage
Dead Space: how to fix the centrifuge
How to fast travel in Forspoken
Star Wars Jedi: Survivor will now release in April following delay
How to get the Silver Card in Fire Emblem Engage
One Piece Odyssey’s great ending would have made for a perfect anime arc