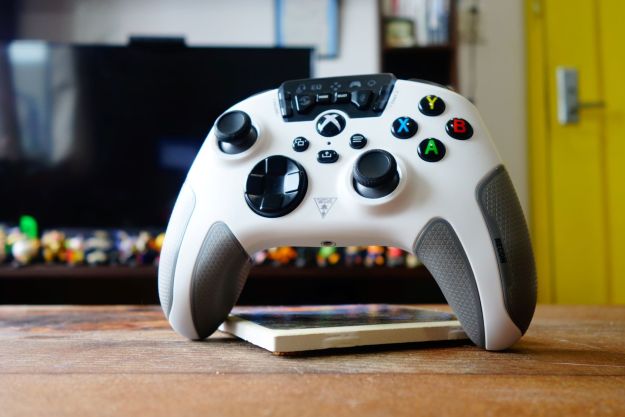 Whenever a new video game console drops, third-party manufacturers get to work. There’s always a race to see who can create must-own accessories that outsmart console makers themselves. That’s especially apparent with controllers, where companies take on the impossible task of improving gamepads that have been perfectly engineered by giants like Sony and Microsoft.

It takes a lot of creative effort to accomplish that lofty goal, but Turtle Beach has struck gold with its Recon Xbox controller. Rather than trying to outdo a regular Xbox controller’s basic features, it offers an entirely new vision of what a controller can do. Turtle Beach has essentially built a sound mixer into a controller, giving players a way to EQ audio, adjust game volume, and even control voice chat on the fly. It’s exactly the kind of innovation one might expect from a company best known for its headsets.

The Xbox Recon isn’t just a niche product for dedicated audiophiles; it’s an excellent console companion that rethinks the utility of a controller. Its wired setup and a few complicated options hold it back from being the best Xbox controller, but a low price point makes it a serious alternative to Microsoft’s baseline Series X controller.

With any third-party controller, there’s always an essential bar that needs to be passed: It needs to have all the basic functionality of its first-party counterpart. Companies like PowerA have created complex controllers for consoles like the Nintendo Switch featuring extra features at the expense of rumble and Amiibo support.

The Recon cuts no such corners. It has everything one comes to expect from an Xbox Series X controller. The button layout is identical, with minor tweaks to some positions. The joysticks don’t feel all too different, it rumbles just as expected, and it even includes an eight-way D-pad, which is missing on some other third-party Xbox pads. Even with some slight differences, everything is in its right place.

In fact, the Recon even goes a little farther in some places. It includes cooling grips and features two mappable buttons on the back, neither of which are included on the standard Xbox wireless controller. Due to the fact that it doesn’t use batteries, it’s also a bit lighter than Microsoft’s controller.

The Recon cuts no such corners. It has everything one comes to expect from an Xbox Series X controller.

The only drawback here is that the Recon can feel a little more toy-like than the sophisticated Xbox Wireless Controller. That’s hardly much of a knock, though. Turtle Beach easily passes the first test here by creating a controller that checks every box and adds some tweaks of its own, all while meeting a comparable $60 price range.

If the Recon just stopped there, it would be a perfectly suitable third-party option. But the fact that I haven’t even talked about its core function yet speaks to how robust a package this ends up being. The Recon is built with audio in mind and includes several ways to tweak the sound in a mini command center at the top of the controller.

With a few carefully placed buttons, players can individually adjust game and chat audio separately. That allows anyone to essentially mix audio on the fly without diving into menus and making adjustments. Usually, one would need external tools to do this, so the fact that it’s built right into the Recon is tremendously useful. It even features a mute button that allows players to cut their microphone without fiddling for a button on their headset.

I can’t think of any video game controller that’s ever even aimed to do what Turtle Beach has accomplished here.

I did notice that the chat control didn’t seem to work right on PC games I tested. When playing Back 4 Blood’s beta using in-game chat, bumping down chat volume had no effect. That left me unclear on where exactly I could use that feature outside of playing on an actual Xbox.

Going one step further with audio, the controller features four equalization presets that let players toggle between different sound profiles. Players can boost the bass, prioritize game chat, increase treble, or go for a more even mix via Turtle Beach’s Signature Sound option. There’s also a one-press button that activates Superhuman Hearing, which boosts quiet sounds like footsteps (though I found that it just turns up everything in general).

All of that comes together to give players complete control over the game audio. When playing Last Stop, I could quickly switch my EQ to prioritize voices on the fly. During a musical montage, I could just as easily flip the bass on to round out the orchestral score. Players will most likely select their favorite presets and leave it at that, but I found myself flipping back and forth just for the sheer novelty of it all.

I have to emphasize how impressive it is that all of this is happening without any sort of software or driver installation. All of these options are housed within the controller itself. I can’t think of any video game controller that’s ever even aimed to do what Turtle Beach has accomplished here. Being able to adjust microphone monitoring or boost bass just as one would tap a button to jump is extremely impressive and makes the Recon a true, one-of-a-kind controller.

With all its bells and whistles, the Recon still has a few notable quirks. Most importantly, it’s a fully wired controller, which is its main sticking point. For those who don’t want to thread a mesh wire from their Series X to the couch, that might be a tough sell. It doesn’t help that players need to use wired headphones here too, adding some cable juggling. That’s made the Recon more of a go-to for my PC than my Xbox, as playing tethered is more common in my own PC setup.

It’s filled with great features, though each adds mounting complexity to the device.

The controller also features two mappable back buttons, which are perfectly unobtrusive, though that’s not without some issues. The triggers can’t be mapped to back buttons for some reason, nor can button combinations. On the plus side, players can set up four different mapping profiles and flip between them quickly. I had A and B mapped to one profile and the right and left bumpers set on another, for example.

The back buttons also have some odd interactions with the Recon’s other special feature (yes, there’s more): Pro-Aim. When the option is enabled, players can hold down the right-back button to reduce stick sensitivity. For example, one could press it while aiming down sights to drastically drop the sensitivity in an instant and allow for precise aiming. There are even four different presets for Pro-Aim. The only issue is that you can’t really map a control to the back button and use Pro-Aim at the same time, or else you might jump every time you try to aim. It’s an amazing feature for a controller, but one that butts heads with another option.

That’s the story of the Recon in general. It’s filled with great features, though each adds mounting complexity to the device. Trying to tab through EQ presets or map buttons on the fly can be a bit of a circus, and you can’t always utilize every feature at once. Compared to the elegance of a normal Xbox controller, the Recon can definitely feel confusing the first few times you use it.

But that’s a necessary trade-off considering how much the controller can do with no external software. Turtle Beach has loaded a $60 controller with on-board features that other companies had yet to dream up. Considering that the price and build quality is perfectly up to snuff with Microsoft, you really only need to take advantage of one extra feature to get your money’s worth. Even if you only end up using Pro-Aim or something as small as the mute button, you’re getting more functionality than a normal Xbox controller. It’s shocking that this won’t run players $100, but you won’t hear me complaining about a good deal.

While third-party controllers can be a risky proposition, the Xbox Recon cuts through the noise by doubling down on Turtle Beach’s strengths. The audio-first controller gives players lots of handy features that make it easy to tweak the sound mix on the fly. Even with some notable quirks, Turtle Beach is doing something truly unique here, which makes the Recon stand out in a field that’s only going to get more crowded.

For a basic wireless controller, the baseline Xbox Series X is still your best bet. The hybrid controller-mixer setup is somewhat first-of-its-kind, though.

It’s always hard to say with third-party controllers, but Turtle Beach is known for quality products. It will be surprising if you don’t get a few years out of it.

Yes. The Xbox Recon is a surprisingly useful controller for players who use headphones while in-game or for anyone looking for some extra button customization.

This wireless workaround will give your Google Stadia controller new life
The best games on PlayStation Plus, Extra, and Premium
All cross-platform games (PS5, Xbox Series X, PS4, Xbox One, Switch, PC)
The best multiplayer games on the PS5
Best gaming PC deals: Get a new desktop rig from $530 today
The best N64 games of all time
Best Prime Day Gaming Laptop Deals: What to expect in October
Skull and Bones: release date, trailers, gameplay, and more
Destiny 2: Where is Xur for the weekend of September 30
Ubisoft opens registration for Project U, a mysterious, ‘session-based’ co-op shooter
Dead Space Remake: release date, trailers, gameplay, and more
FIFA 23 beginners’ guide: Tips and tricks to level up your soccer skills
Return to Monkey Island: How to get all the golden keys