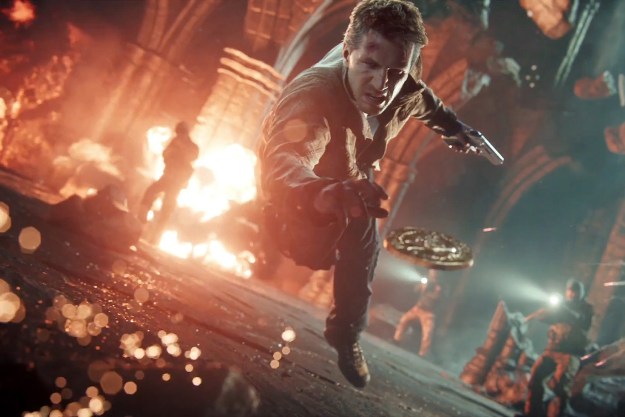 “Uncharted 4: A Thief’s End brings the Uncharted series to this generation of players in a rich and fulfilling way.”

The world of video games has changed a lot since we last saw Nathan Drake. In the five years since Uncharted 3: Drake’s Deception, Sony launched a new console and, most notably, Lara Croft has returned to fill our need for a cinematic action game about historically minded conspiracies in not one, but two new adventures.

In his fourth and final adventure, Nathan Drake does everything you want him to do. He cracks wise, lands death-defying leaps, solves historical mysteries, and he does them very well. He does not, however, do anything especially new or noteworthy, which begs the question: Do we really need to see more of him?

As it turns out, the answer is an emphatic “yes.” Uncharted 4 proves that nailing the fundamentals of a narrative-driven game — compelling storytelling and sharp, polished gameplay — is worth its weight in gold.

A tale of adventure!

Picking up some years after the events of Uncharted 3, Nathan Drake has gotten out of the adventuring game. He’s married and settled down with series love interest Elena, living a simple life with a less glamorous day job. Firmly committed to his promise to stay out of trouble, he is only dragged back in with the return of his long-dead older brother, Sam Drake.

Sam, who was Nathan’s partner in artifact recovery and related crime, was shot during a job gone bad. Nathan assumed he had died, but in fact, Sam spent 15 years in prison, and only just escaped. The price of getting out, though, was extraordinarily high; In exchange for his freedom, a South American crime boss now expects Sam to find the treasure they’d been looking for when he was shot, the treasure trove of legendary pirate, Henry Avery. Nate and Sam pick up the trail, make fast enemies with Rafe, their former business partner, and, just like that, the globetrotting race for a new vast, secret fortune is on.

A Thief’s End excels in all the ways an Uncharted game is supposed to. Though the main plot may sound familiar to anyone who has played an Uncharted game (or seen an ‘80s action movie), A Thief’s End does a better job telling that story than its predecessors. The game does an incredible job in dispensing weaving narrative and gameplay sections to build tension and keep the game moving forward at all times.

Good or bad, this game strives to meet your expectations about Uncharted’s combat and climbing dynamics.

Perfectly placed in-game cutscenes, some of which cut away from the action mid-sequence, give you just enough information to make whatever you’re doing feel urgent and keep you focused in on the current task at hand. The movement between cutscenes and gameplay is also fluid, even in cutaways: Just like with a film or TV show, all of the storytelling cues are made with the camera, since the mid-chapter cutscenes were made with in-game graphics.

Every second of the game is visually stunning. There is no shortage of scenic spots to run across as the Drakes circle the globe looking for treasure, and all of them are incredibly beautiful in their own way. The console generation gap has also been kind to the design of the characters, who all have much more detailed faces, to point where they don’t entirely resemble the faces you remember. If that sounds jarring, don’t worry; the familiar faces grow on you and, more importantly, they look more like actual people.

They also behave more like actual human beings than your average game character. Where so many game series work very hard to maintain an emotional neutral status quo, Uncharted 4 actually leans into the fact that its core characters, Nathan, Sam, Sully, and Elena, have years of history, and the emotional baggage that comes with it. The game doesn’t shy away from letting them express emotions and letting those feelings color the experience. While the abridged version of the story blatantly ticks all the Uncharted storyline boxes, there is a surprisingly nuanced theme of self-awareness and identity that bubbles up through swashbuckling.

Another day, another adventure

The moment-to-moment gameplay of remains largely unchanged since the last Uncharted. The Drake brothers will do a lot of climbing, a fair amount of fighting, and a little bit of light sneaking. Series veterans will recognize many of the details, from familiar places to grab on and climb to identical enemies. The shooting is still very sharp, even with aim-assist off. Sadly though, the enemies still tend to absorb too many bullets before going down. There are fewer excessively long combat sequences, and better checkpointing, so failure is a generally far less frustrating setback.

There are some distinctive new features thrown into the mix. Drake now carries a grappling hook, so rather than grabbing vines and ropes, you simply throw your hook and swing across chasms or rappel down cliffs. The game also elevated sliding to a core movement mechanic this time around, liberally adding steep, muddy and/or gravelly hills into climbing sections. All of these options combined help keep the climbing and running from feeling stale, though certain combinations of these mechanics are overused. (You are going to slide, then jump and swing a lot.)

Drake also spends a much larger percentage of his adventure with an AI-controlled partner backing him up. Mechanically, Drake’s AI allies are much more aggressive; in stealth combat sequences, they will even mark targets and take down enemies. While they’re not the best shots, when fighting hand-to-hand Nathan can team up with an NPC friend for a context-sensitive attack, like a two-person body slam. Generally speaking, giving Drake someone to talk to also helps keep you immersed in the story: Listening to Nathan and Sam banter while scaling a cliff face conveys their relationship in a way that exposition simply can’t, and makes the important story moments more meaningful.

Good or bad, this game strives to meet your expectations about Uncharted’s combat and climbing dynamics. If you don’t come in with expectations, then it’s worth noting that Uncharted 4 is, like its predecessors, a story driven experience. The game’s many types of gameplay — climbing, shooting, stealth, puzzles — are all fun, but superficial and repetitive; ultimately you are playing to find out what happens next, not for the joy of doing it.

The game does attempt to flex its next-generation muscles by adding chapters with large pseudo-open areas in an attempt to give you the chance to do some honest-to-goodness exploring in between chase scenes and firefights. The areas, which often require a vehicle — either a Jeep or boat — gives you room to run around, do some extra climbing, and scour for optional collectibles. While it’s a nice gesture, these areas generally fall flat. There are a lot of open, empty spaces, with a few key locations scattered throughout. While the hot spots are often marked in some way to let you know that there’s something worth looking at, such as scalable cliff or a weathered old tower, you will still spend a fair amount of time “searching” for the fun, rather than having it.

More importantly, giving you more room to stray from the game’s intended path doesn’t necessarily make the game any less linear. No matter how vast the area may seem, Drake still needs to get from point A to point B: There are a few moments with neat interactive cues — I particularly enjoyed one exchange where Nathan haggles with a shopkeeper over a collectible —  but there were no notable encounters or side objectives to make “exploring” valuable in its own right.

Multiplayer is worth exploring

Surprisingly, the most thoughtful and productive new ideas in Uncharted 4 can all be found in its substantially retooled multiplayer. Like the series past online modes, A Thief’s End has a team-based third-person shooter mode that features the story’s strong shooting and climbing mechanics. Previous Uncharted games relied on those mechanics simply translating to multiplayer, but Uncharted 4’s multiplayer features new systems that make it feel distinct.

Taking just slight a cue from MOBAs (Multiplayer Online Battle Arenas), you can now earn currency to buy consumable upgrades mid-match. In addition to picking starting weapons, character loadouts can be customized with up to four types of items you can buy using gold acquired by scoring kills and finding treasure. Purchasable items include gear, like grenades, power weapons (like a heavy machine gun), AI-controlled sidekicks –which can defend a location or provide covering fire — and one-time use mystical items, which gives you supernatural abilities. Where shooters can easily devolve into a simple (and somewhat mindless) contest of reflexes, smartly spending your gold and using power items gives you a lot more to think about in every match, whether your playing “untethered” in an open match, or as part of a coordinated unit with friends.

A Thief’s End excels in all the ways an Uncharted game should.

Of course, the weapons and items you can add to your loadout are doled out through a permanent level-based progression, and by accomplishing certain tasks, such as killing enemies with a certain type of gun or effectively using your mystical weapons. There are also cosmetic items, including new characters and costumes, which can be purchased with real money or using currency earned by winning matches.

Though its breadth may be considered relatively modest compared to other shooters, what is included feels durable and well planned. For example, there are eight maps and three modes: team deathmatch, capture the flag, and a modified version of King of the Hill. They aren’t numerous, but they are fun. The new levels, which incorporate the story’s new penchant for swinging and sliding, feel much easier to traverse than older games. Unlike in past games, you are much less likely to get caught while scaling a building.

As good as it is, Uncharted 4 makes a great case for letting a game franchise go at the end of a hardware cycle. It improved on the series in every way it could while hewing to expectations fans had developed after three distinct, but similar entries. This is a better-looking version of Uncharted, a more refined version, but A Thief’s End makes it clear that there is no “next-gen” version of Uncharted. There is no need for a mechanical overhaul that gets the next game somehow closer to achieving developer Naughty Dog’s next big idea. Uncharted has already achieved all it can. When you hit that point, there are two options: run a series into the ground or move on.

Uncharted 4 is a great victory lap that gives fans a chance to do something very rare in modern entertainment: give their beloved characters a proper sendoff.

Topics
The best PS5 games for 2022
The best games on PlayStation Plus, Extra, and Premium
The best games on Xbox Game Pass for 2022 (right now)
Best PS Plus deals for November 2022
How to evolve Pawmo into Pawmot in Pokémon Scarlet and Violet
Live now: Save $50 on the Microsoft Xbox Series S Digital Edition deal
‘Wordle’ today, November 24: Answer, hints, and help for word of the day (#523)
7 video game characters who deserve a Macy’s Thanksgiving Day Parade balloon
The best multiplayer games on Nintendo Switch
The best PS5 headsets
The best Xbox Series X headsets
Save $250 on the Razer Iskur X XL gaming chair for Black Friday
This PS5 controller Black Friday deal drops the price by $20