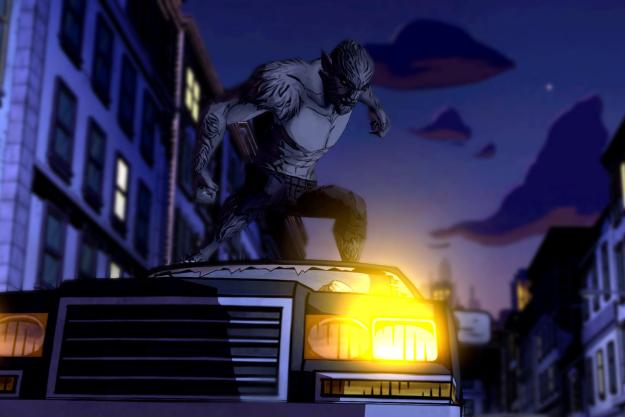 “Cry Wolf, Telltale’s fifth and final episode of The Wolf Among Us: Season One, hits all the right notes.”

“Fabletown is afraid of the Big Bad Wolf.”

That’s where Sheriff Bigby Wolf leaves things in the closing minutes of Cry Wolf, the fifth and final episode of Telltale Games’ first season of The Wolf Among Us. One version of Bigby, at any rate. Maybe you were a benevolent sheriff, faithfully serving and protecting the little guy (and gal, and anthropomorphized farm animal), even when it went against what the letter of the law might deem to be “right.”

“Fabletown is afraid of the Big Bad Wolf.”

Ultimately, it doesn’t matter. Whether or not the residents of Fabletown openly fear their sheriff at the end of the story, poor Bigby is the target of so much abuse – emotional, mental, and physical – over the course of these five episodes. He’s a necessary peacekeeper in a community that shuns him, the bulwark of a broken system that this story’s principal villain has been fighting against.

Who cares if the Crooked Man’s benevolence is motivated by all the wrong reasons? Over the course of the four previous episodes, we learned about how this shadowy figure’s vise-like grip on the Fabletown community kept the barking dogs (Wolf) of “justice” at bay. We’ve seen firsthand that the story’s ostensible villain is as much a protector as he is a crime boss.

It all comes back to Bigby. He’s not the hero of this story. He’s not even really victorious when all is said and done; however the denouement plays out, the ills that plague Fabletown remain. It’s easy to forget that this is a refugee community, but the concluding events of Cry Wolf bring that into sharp focus. You, as Bigby, crack the case in this detective story, but it’s not a happily-ever-after moment. Life moves on. Implications must be dealt with.

Cry Wolf is thus a summation: You’ve made your choices, and this is what those decisions have wrought. It’s the most funneled-along episode of any that Telltale has produced since The Walking Dead premiered. The climactic set pieces don’t leave a whole lot of room for narrative choice, nor do the final scenes that follow them.

That’s not to say it’s a predictable finale. Cry Wolf is full of excitement and closure. There are key confrontations, the sort that steam has been building behind all along. Bloody Mary, Georgie, the Tweedles, and yes, the Crooked Man himself all get face time with the big, bad Wolf. It’s a brief episode, but it’s filled with tension. Credit where it’s due to the writing team for continuing to toy with expectations even when it seems that all truths have been laid bare.+

It’s the most funneled-along episode of any that Telltale has produced since The Walking Dead premiered.

There’s just one stumble, an awkward, forward-looking tease that’s apparently meant to set up the all-but-assured second season. The final scene, which amounts to a brief exchange between Bigby and another key character, hinges too much on remembering fine details from months-old episodes. There’s an argument that Telltale intentionally left this murky to encourage a repeat playthrough, but it’s a rare moment in which a bit more transparency would have better served the story.

No matter the path you carved through the first five-episode season of The Wolf Among Us, you met a Bigby who was cursed out, yelled at, beaten, shot, stabbed, and in all other ways abused. Even the best possible Bigby isn’t a beloved savior.

In the end, was your Fabletown afraid of the Big Bad Wolf? Better question: Does it even matter if they were? Cry Wolf shoves aside all the baggage and opens the door for Bigby to save the day, but it also leaves behind a lingering, nagging question. How much can one solved crime ever matter in the face of this terrified, fractured community?

Among Us roles guide: How to play as the Shapeshifter, Engineer, Guardian Angel, and Scientist

Among Us adds in-game purchases, experience points, and more in huge update