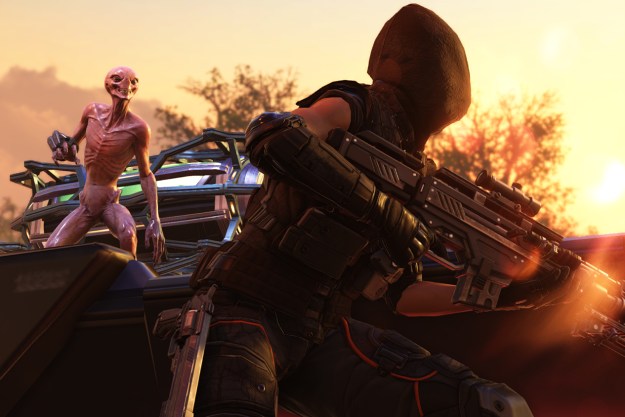 “XCOM 2 is one of the richest and best designed strategy games we’ve ever played.”

Captain Tina “Butts” Belcher crouches behind the concrete embankment, weighing her options. Most of the squad has already escaped to the evacuation zone across the plaza, whisked away into the hovering Skyranger.

Tina, top-ranked sniper of the human resistance, had stayed behind to provide covering fire from above, giving her squad mates time to escape, but also allowing Advent reinforcements to close in on her. Already limping from an earlier grenade blast, Tina can’t withstand much more.

Across the way, recruit Akira Watanabe nervously fingers his assault rifle. The cruel calculus of XCOM leaves little choice: Akira leaps over the wall and makes a heroic dash, collapsing under a storm of laser fire, while Tina escapes to safety in the distraction. It’s harsh to make a sacrificial lamb of a fresh-faced recruit on his first mission, but tough choices must be made if we’re going to take back the Earth.

XCOM: Enemy Unknown (2012) was Civilization developer Firaxis’ extraordinary reboot of the classic ‘90s strategy series about leading a force of elite operatives to hold off alien invasion. Counter to the usual logic of sequels, XCOM 2 starts with the premise that you lost the first game. The aliens arrived, and humanity knelt. Now, 20 years later, a semblance of peace has been imposed by the joint alien-human Advent government. What remains of XCOM now leads a guerrilla insurgency, operating out of a stolen alien carrier ship to rally a global resistance and dismantle Advent’s sinister schemes.

An impossible board game

Not unlike Civilization, XCOM 2 is a bit like a board game that would be just a little too tedious to run with dice and cardboard. A handful of soldiers, each one of five specialized classes, drops into a procedurally-generated battlefield to complete objectives ranging from simply eliminating all hostile targets to rescuing civilians from terror raids, or kidnapping high-value assets. Each soldier gets two “action points” per round, which can be used for things like moving and shooting, and turns alternate back and forth between the player and Advent.

After individual missions, you’ll fly around the world in your mobile base the Avenger to gather resources and develop resistance contacts. Monthly income earned this way can be used to build equipment and facilities, train soldiers, and research new technology. In addition to the basic currency of supplies, secondary resources like intel, alien alloys, and even time must be carefully managed, and can be spent in numerous ways to develop your organization. Balancing these intersecting economies is reminiscent of European-style board games like Settlers of Catan or Power Grid. You’ll even need to decide whether you want engineers building new rooms or staffing existing facilities — a light worker placement mechanic.

Unlike real-time games such as Halo or Starcraft that tax your tactical decision-making with time pressure and twitch reflexes, XCOM gives you all the time you want to make each move. The challenge instead comes from giving you finite resources and hard choices, and XCOM 2 excels in providing just the right number of options at any given moment across all levels of the game.

Staying true to the spirit of the original, XCOM 2 is difficult. Every time you start to feel confident in your operation, Advent will throw a horrifying new threat at you, forcing you to scramble and reevaluate all your tactics in response. Battles are won or lost by precious inches, and the game frequently forces you to choose the terrible option you can most stomach.

Lead designer Jake Solomon described XCOM 2 to me in an earlier interview as a “struggle fantasy,” inverting the usual video-game trope of making the player feel powerful. You’re the scrappy underdog, rallying against overwhelming odds.

Sacrifices must be made if we’re going to take back the Earth.

Although punishingly challenging at times, the game never feels unfair or capricious. When you’re caught off guard, it feels as though you could have made better choices earlier. When things do go well, the feeling of badassery is all the more potent because of how hard-earned victories are. Difficulty can be adjusted up or down at any time, however, to taste.

Playing normally allows you to “save scum” and reload to a previous turn when things go poorly, turning challenging situations into a sort of time-travel puzzle for how you can affect the best possible outcome. Many devoted fans, however, consider Ironman mode to be the true XCOM experience, automatically saving as you progress with no backtracking. Mistakes have irrevocable consequences in Ironman, making those choices all the more harrowing.

Underlining the game’s difficulty and providing the high stakes is the realistic convention that when your soldiers die or are left behind in a mission, they are gone forever. Your units also become more powerful, and gain new class abilities the longer they fight, creating a tension: The veteran soldiers you most want to rely upon are also your most devastating potential losses. Sometimes, you might even push a recruit like Watanbe into the grinder to save a vet like Belcher.

This is my squad. There are many like it, but this one is mine.

Besides stats, each soldier carries a wealth of tweakable cosmetic options, from eyes, hair, and ethnicity to scars, props, and headgear. There’s even a setting for “attitude”, which colors their animations and vocal responses with demeanors like “twitchy,” “by the book,” or “hard luck.”

As soldiers achieve higher ranks, more customization options open up. With enough effort, you can turn your team into your friends and family, neutral clones, or, as I did, the Belcher family from Bob’s Burgers.

Importantly, all of this is entirely optional. New recruits show up looking like individuals, and left to their own devices will acquire scars, props, and choose their own nickname over the course of play.

As a side effect to this randomness, XCOM 2 quietly does diversity better than nearly any other mainstream game. In my most recent play-through, my starting squad happened to be entirely composed entirely of non-white women. Aliens, it turns out, don’t discriminate.

Sophomore slumps are for chumps

XCOM 2 categorically improves upon its beloved predecessor by deepening what was great about it, while also excising and replacing elements that did not work as well.

For instance, in Enemy Unknown, the best tactic for nearly all situations was creeping forward slowly. Its expansion, Enemy Within, tempted you to rush for special resources that expired within a fixed number of rounds, but it always felt like a patched-on solution. XCOM 2 overcomes this with a variety of parameters that change the pace from mission to mission. Some start in stealth, allowing your units to sneak past enemies and set up ambushes. Some have overall timers of how long you have to complete a mission and before your ride leaves. Some have no time pressure. This variety of conditions demands a much wider range of tactics, and produces less repetitive gameplay.

Staying true to the spirit of the original, XCOM 2 is difficult.

The four main classes of the first game are all more or less back, but tweaked to allow for more variety in how you use them. They are joined by a new psychic class, which gains powerful abilities through training in a special facility, rather than field experience.

Enemies are broadly familiar, but many with nefarious twists that will surprise and delight returning fans; even the humble, grey-skinned sectoid is cause for concern now with devastating psychic attacks.

Operating out of the mobile Avenger forces some strategic twists, too. You’ll need to forge connections with regional resistance cells, gather resources, and respond to Advent threats as they emerge. Coincidentally, flying around in a jet and choosing where best to spend your time is very similar to Klei’s Invisible, Inc., a stunning tactical stealth game from 2015 that in turn owes much to Enemy Unknown.

Left unharassed, Advent will steadily construct facilities around the world and complete the sinister Avatar Project, winning the game. Fortunately, you can turn back their doomsday clock by sabotaging these facilities in challenging raids.

Every month you are also presented with three upcoming “Dark Events,” with effects like adding extra armor to Advent troops for the next month, or sending a saucer to hunt you down. A few weeks into the month, you will be presented with missions that correspond to each of these Dark Events. Like the terror raids in Enemy Unknown, you can only respond to one, forcing you to weigh the consequences and rewards.

A big reason for the previous game’s enduring popularity was the emergence of fan-made mods, particularly The Long War, which extended and complicated the campaign to make it more challenging for serious players. Firaxis has doubled down on mod support for XCOM 2, sharing all of the assets and source code alongside the game at release. The team behind Long War has even agreed to take time off of their own project to create officially-supported mods for launch. Now a full studio going by Pavonis Interactive developing their own XCOM-inspired game, they have released a full Long War 2 mod for players that want the longest and most punishing possible XCOM 2 experience.

The customization goes as deep as you want it to, whether that’s tweaking the radius of your grenade explosions, making your armored soldiers look like Stormtroopers, or making it so specialist Linda Belcher responds to orders with her trademark “All right!” Although the decision to support modding also meant developing solely for PC at first, where the previous game also released on consoles, the added developmental focus feels like a worthwhile trade. PS4 and Xbox One versions have since come out.

Even without any mods, XCOM 2 is an absolutely fantastic game. Firaxis took one of the best strategy games in recent memory and improved upon it in nearly every way. The expansion War of the Chosen improves on the formula even further, but even in its basic state, XCOM 2 is a stunning achievement.

No. XCOM 2 is the gold standard for turn-based strategy.

A single playthrough will take around 30 hours to complete, but the game’s random elements make it infinitely replayable.

Yes, as long as you’re willing to give it your undivided attention.

This game was played on a Windows 10 PC with a Steam code provided by publisher 2K.