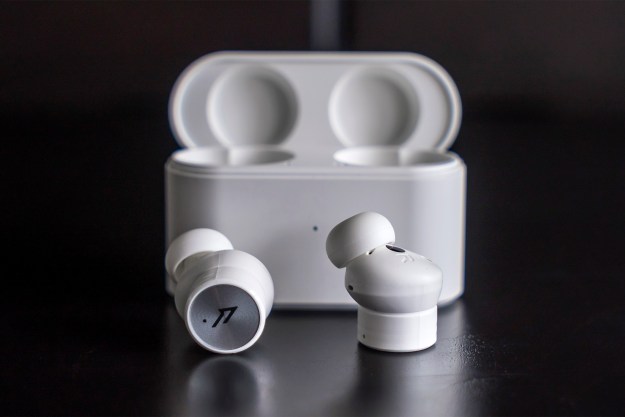 “Don't let their size fool you: The 1More PistonBuds Pro are no-compromise earbuds.”

You might assume that making wireless earbuds small enough for people with tiny ears would lead to major compromises, but that’s not necessarily the case. The $70 1More PistonBuds Pro look and feel diminutive, yet offer enough variance in how they sound that your ears appreciate the lack of sacrifice. Did 1More have to sacrifice other qualities in its quest for space savings, or do good things really come in small packages? Let’s check ’em out.

There aren’t too many surprises to unearth in the box. You get four sizes of eartips, including an extra-small options, plus a short USB-C cable and user manual. The manual is thick because it covers several languages, and goes over all the controls and options available.

No stranger to smaller earbuds, 1More has tried its hand at them on different lines before. Its ComfoBuds lineup is a good example, and while the naming convention makes it obvious what the focus is there, the PistonBuds Pro are very much in the same boat.

They have a smaller frame, with tighter construction, meaning the eartips and audio drivers don’t stick out quite as much as they do with other pairs. This shortens the distance from the outer part of the earbud to the inner ear (concha), thereby allowing the whole bud to sit well and not get as loose as others might. In fairness, there’s nothing really revolutionary going on here with the design, but it is a crafty way of slimming things down enough to appeal to those with smaller ears.

I don’t usually encounter too many issues with fit and comfort personally, but I do notice nuances. These were a snug fit, no question. Their lighter weight also made longer periods of wearing them feel natural, including when wearing them for standby in case calls come in or while listening to a longer podcast. You might even be able to sleep comfortably in them.

The case feels just as nimble as the earbuds do.

Despite their stature, the PistonBuds Pro support active noise cancellation (ANC), passthrough mode, and have touch controls on the outer surfaces. They also automatically pause when either bud is removed, and start playing again when the bud is put back in the ear The controls are pretty standard. Double tap to play/pause or triple tap to access your voice assistant. You can also double tap to accept or end a phone call. These apply to both sides, though you can customize them in the 1More Music app. For instance, you can assign a double tap to skip a track or raise/lower volume. Same with a triple tap, where you can assign one side do something else besides accessing the voice assistant. Tap and hold to switch between active noise cancellation (ANC) and passthrough. The manual mentions a wind reduction mode, but I never actually saw this in the app, so it may come in a future firmware update.

The controls aren’t bad, and it’s mainly because the surface area you tap is so flat. The controls are fairly standard, so it’s easy to know that you’ve tapped the right area. While not the best I’ve seen, they proved to be reliable.

The case feels just as nimble as the earbuds do. Very easy to pocket and super lightweight, it’s one of the most feathery I’ve come across. Otherwise, everything is pretty simple. Plop the earbuds into their respective sides, and the magnets do the rest to lock them in place. They come in black and white variants.

Doing more with the app

The 1More Music app serves up a pretty good set of features and enhancements that prove useful. The most obvious are the ANC/Pass-through and equalizer, but you also get others. One is a low-latency mode that can work for playing video games or watching movies to better sync up audio and video. Smart burn-in lets you settle the earbuds’ drivers into their ultimate sound. It’s a process purists may appreciate, but it’s a long one. The first phase alone took 12 hours, with the whole thing running between 40 and 50 hours. You don’t have to do it, since just playing music over that time could lead to the same result anyway, which is what I chose to do instead.

The company will push firmware updates to the app, as well as experimental features that you will eventually be able to try out. A soothing sounds section offers a set of white and ambient noise settings that you can listen to if you like the idea of meditating or sleeping to summer rain, thunderstorms, waterfalls, beach waves, fire, and more than 20 other sounds.

There are a few things at work here that help make the PistonBuds Pro better than you might think. First, is the fit itself which enables you to get a tighter seal and keep the bass from leaking out. Second are the 10mm drivers that were tuned by Bignardi, and third are the 12 EQ settings developed by Sonarworks in the app. Throw in ANC, and these elements come together for excellent sound quality.

What stands out is the flexibility to see what the different EQ presets can get you. The default sound isn’t bad at all, but I did find myself playing around with the EQ presets to see if I could ramp things up just a little more. Without the ability to customize my own presets, the dozen available were my only options. I listen to a pretty wide variety of genres, so it would’ve been nicer to have an EQ that would let me at least adjust the highs, mids, and lows independently because some presets skew one or two of those elements more than I’d personally like. Your ears might feel differently, but for me, I like a bit of a deeper tonality to jazz tracks, whereas the preset here felt a bit too warm. The mids and highs were fine, but the lows dropped too far.

The PistonBuds Pro hold up well with just about any audio content you throw at them.

For those reasons, I can’t say these earbuds are best for one genre or another. You may not be super impressed with the bass if you want to feel a serious rumble in your ears, but apart from that, the PistonBuds Pro hold up well with just about any audio content you throw at them. Whether it was R&B, jazz, rock, or podcasts, I came away liking how they handled the variances. The tight seal was easy to appreciate, too.

I just wasn’t thrilled that they only support AAC and SBC codecs, as aptX would’ve been great for Android users, but it is one of the corners 1More cut here. ANC has to be on to get the best overall sound signature, regardless of what you’re listening to. It’s fine when off, but I felt the resonance change every time I toggled it on. As for cutting out background noise, the ANC is pretty much where I would expect a pair of sub-$100 earbuds to be. Passthrough also worked well, even if it wasn’t all that remarkable.

Phone calls are fine, though louder settings are more difficult to drown out to maintain clarity during a conversation. You’ll manage in most cases, but I personally found quieter settings much better for taking calls. For gaming and movies, the low-latency mode works pretty well, but I found shows and movies were generally fine without it. Still, it’s nice to have as an option, just in case.

The earbuds have an IPX5 rating, so while you could use them for workouts or runs, my interpretation is that they’re not that rugged. If you do break a sweat in them, it’s best to wipe them clean to avoid any water or salt seeping in.

As with any pair of earbuds with ANC, battery life falls into two scenarios. Leave ANC on, and you can expect up to six hours per charge. Leave it off, and it’s 7.5 hours. These figures apply when volume level sits at a default 50%, so turning it up drops each figure down a little further.

The case has an extra three charges, which is great for something this size. You won’t be able to charge them wirelessly, but they do fill up pretty quickly via USB-C. It even supports fast charging, where a quick five-minute charge can get you an extra hour of playback.

The 1More PistonBuds Pro pack a real punch for smaller earbuds, with a feature set and support that add value to a more inexpensive pair of buds compared to so many others on the market. If you have smaller ears, their size may be just what you’re looking for, and you don’t lose a whole lot in performance for what you pay to wear them.

Smaller earbuds are slowly getting easier to find, and 1More does have some experience there, including with the ComfoBuds Mini. They’re even smaller than the PistonBuds Pro, and largely engineered and tuned the same way, so you still get good sound out of them. You do pay a little more for them, though.

The Anker Soundcore Life P3 are also worth a look if you want stems, like the AirPods. They also support ANC, have two extra microphones and great app support, and offer wireless charging. At their $80 price tag, they’re also very compelling for what you get. If you’re on a tighter budget, the Back Bay Tempo 30 come in around $50, have great sound, and are also far more ruggedized. You won’t get any ANC or passthrough, nor any app support, so it’s much more about the size, sound, and durability above all else.

Take care of the PistonBuds Pro and they should last a fairly long time. Nicely constructed, despite their budget price, they should be fine, especially if you only plan to use them in leisurely situations. There’s a standard one-year warranty to cover functional issues, though not physical or water damage. The company does offer extended warranties through its website by way of a third-party provider.

Yes, especially if you feel like fit and comfort have been an issue because other earbuds were too big. The PistonBuds Pro don’t skimp on key features, and your ears will probably feel better when you put these on.