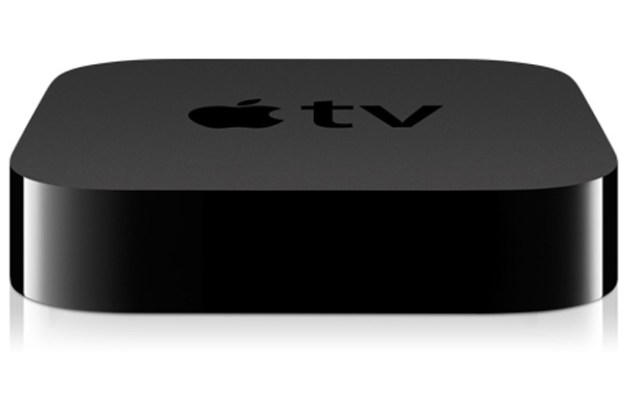 Looking for the latest Apple TV? Make sure to check out Apple TV Review (2012).

Steve Jobs doesn’t have many failures to mar his comeback at Apple, but if most Apple aficionados had to find one, we’re guessing it would be the little white box known as Apple TV. The first version arrived with a fizzle back in 2007, largely panned for its high price and low functionality. Apple has steadily sanded off rough edges year after year, though, and in 2010 Apple TV underwent a metamorphosis, entering a cocoon and emerging smaller and cheaper than ever. But does the latest version of Apple TV finally deliver on the promise Jobs pitched three years ago, or is Apple still struggling to break onto the big screen?

“Unobtrusive” would seem to be the operative word for the redesigned Apple TV, which shrinks to such tiny proportions that it’s apt to almost disappear in home theater cabinets designed for the hulking, heat-gushing equipment of yesteryear. At only 3.9 inches square and just under an inch thick, you could easily pocket the device, though we’re not sure how much utility that particular trick actually serves, unless you’re the migratory breed of college student who moves his A/V equipment around twice a year. Its all-black design — and cables — melt into the darkness of an A/V cabinet, with only Apple’s signature white LED signaling that it’s even on. Sadly, the remote requires line of sight, so zip tying it to the back of your TV or burying it deep in your A/V cabinet isn’t an option.

The case itself seems to be constructed from the same polycarbonate Apple favors for just about everything, although cast in jet black rather than the traditional milky white. As usual, tolerances are tight and the entire package feels brick-solid — as it should, considering there are no moving parts — not even a fan.

Around back, Apple offers an ultra-minimalist selection of ports: HDMI for video, optical digital audio, mini USB for service, an Ethernet jack for connectivity (although it has 802.11n Wi-Fi too), and a standard two-prong power jack that accepts the type of cable you might normally find running into a laptop AC adapter. The included one has an unusual look and feel that reminded us of the cord on a table lamp from the 1970s. Not that you’ll do much looking at it anyway.

The remote has become a sliver of aluminum somewhat reminiscent of last year’s iPod Nano; slim but solid and eminently holdable. It bears only a five-way directional controller, menu button, and play-pause button, which together provide everything you need for the Apple TV.

Apple TV started as a simple — some might say too simple — mechanism for getting iTunes content from computers to TVs. It’s evolved since then, but not that much.

This year, Apple added Netflix streaming to the device, which lets owners dive into a library of more than 15,000 streaming movies and television shows for as little as $8.95 per month. It can also handle content from YouTube, MobileMe, Flickr, and a large variety of streaming radio stations, plus MobileMe.

The Apple TV also takes a step backward this year. Unlike last year’s Apple TV, which had internal storage to accommodate downloaded content, Apple has shifted the 2010 model to an all-streaming design. Pull it from the Internet, pull it from your computer, just don’t expect to pull it from the box itself. Unlike just about every other streaming player, the Apple TV also lacks a USB port to play content from thumb drives and portable hard drives.

The Apple TV’s limited output options may be one of its most notable shortcomings. While competing models like the WD TV Live Plus and Roku XD can output true 1080p, the Apple TV only handles 720p. So much for leveraging the full quality of your $3,000 TV. Perhaps even more significantly, it will only output via HDMI, not through any legacy connectors like component, composite or S-video. Ironically, the same cut corner that clearly helped Apple stick to its lean $99 price point also severely limits its appeal for the budget-oriented crowd; your TV will need to be no older than seven years, at the most, to even work with an Apple TV. There goes any chance of hooking it up to the hand-me-down bedroom TV or basement clunker.

Even if Apple weren’t world renowned for its outstanding UI designs, the company has had three years to iron out a TV interface for the Apple TV, so it comes as little surprise that the navigation experience is easily the best in its class. Different sources of content have been neatly sorted into intuitive categories (iTunes, Internet, computer) and large, full-color DVD and album covers like to pop out at you from every corner, lending the interface a very polished, storefront feel. It makes sense. Apple isn’t just showing you your content with Apple TV, it’s selling you content.

The Netflix interface, new for this year, deserves particular applause. You can buy a Blu-ray player, console, and half a dozen other set-top boxes with streaming Netflix access, but Apple has executed the browsing experience better than any of them. Besides offering access to your instant queue and the standard movie categories, you can branch off an existing title you like to find new content in different ways. Choose a movie you like, for instance, and you can highlight an actor or director to see more films from them. Choose a TV show you like, and you can see every season of the same show in a neat list — a long overdue option. And unlike the Xbox, which insists on cramming box covers into a police lineup you can basically walk up and down, Apple arranges them into giant arrays of three by seven, letting you leaf through 21 titles at a time.

Controlling the Apple TV with the included remote is about as simple as it gets. Besides offering only a handful of control options, all three have a distinct feel beneath the thumb and a audible click when you use them, making it a cinch to operate blind — so simple we won’t even criticize the lack of backlighting. Together with the the aforementioned interface, navigation is almost telepathic, until it comes time to input text and you’re left sliding through the same grid of numbers and letters you used to spell out your save game name for The Legend of Zelda on Nintendo back in 1986. Lame.

Fortunately, Apple does offer some relief with the option to use an iPhone, iPod Touch or iPad as a remote. The free Remote app for allows all three options to fill in for the included remote with flicks and taps, and even go above and beyond by allowing you to browse connected libraries right on the phone then begin playing it on the Apple TV.

The biggest let-down after exploring this shiny new playground on your TV comes when you actually want to find something to watch. Apple has pulled the usual maneuver of shepherding users into its own pastures of carefully pruned content, but it’s both overpriced and too narrow.

Ninety-nine cents to rent a TV show for 24 hours? Last we checked, we could get an entire movie for that price at Redbox. And Apple wants $3.99 for said 24-hour movie rental? No wonder piracy continues to reign supreme.

Even if you’re content to spend $10 for an afternoon’s 30 Rock marathon, Apple’s selection comes up surprisingly short. Because the box has no storage for direct downloads, you can only access titles that have been specifically offered up for rental – typically all newer releases from a handful of networks. Pretty much any of the content we tried to sample — Mad Men, Sons of Anarchy, Easy Rider, King of the Hill — came up missing. Sadly, most of it is available to buy through iTunes, but you’ll need to dig out a computer to actually do it, which seems to terribly un-Applelike.

Setting up content to stream from a PC is pretty much easy as installing iTunes and enabling “Home Sharing,” and it worked flawlessly for us the first time around. But like most Apple products, ease of use comes at the expense of flexibility. Every Apple TV has to be tied to an iTunes account, which means registering with Apple before it works if you don’t have one, and every iTunes account can be authorized with a maximum of five computers. That’s not to mention that it also snubs the uPNP standard for streaming media that just about every other media streamer on the face of the earth uses.

The same Apple fussyness also carries over to media formats. We could deal with Apple TV’s lack of support for WMA, WMV and FLAC files, and nobody really expects it to go above and beyond and play VOB files like the WD TV Live Plus, but missing Xvid and DivX support are almost inexcusable. These two formats alone will account for a majority of content in many downloaded and ripped-at-home media libraries, potentially making the Apple TV almost useless, depending on what type of files you’ve been accumulating.

For $99, it’s hard to judge the latest version of Apple TV too critically, but the low price translates to a correspondingly narrow scope of capabilities. Sure, Apple bowed to popular demand by slipping Netflix onto Apple TV for this generation, but the little black box remains an iTunes storefront more than a real streaming media solution. Using one feels a bit like clicking past the turnstile into Walt Disney World: You’re immediately surrounded by cool stuff, but you’ll find yourself opening your wallet over and over again in an an environment purpose-built to seal out the outside world. Four-dollar movie rentals and dollar TV show rentals are Apple’s $8 pretzels and $5 Cokes.

Safely sequestered from competitive forces like Amazon on Demand, Hulu Plus, and Vudu, not to mention popular video formats like Xvid and DivX, the Apple TV offers little that a serious media enthusiast would drool over. But its undeniable ease of use and low purchase cost will still make it worthwhile for casual consumers willing to pay a premium to live in Apple’s safe — and limited — cocoon of convenience.

14 Apple AirPods tips and tricks that you need right now