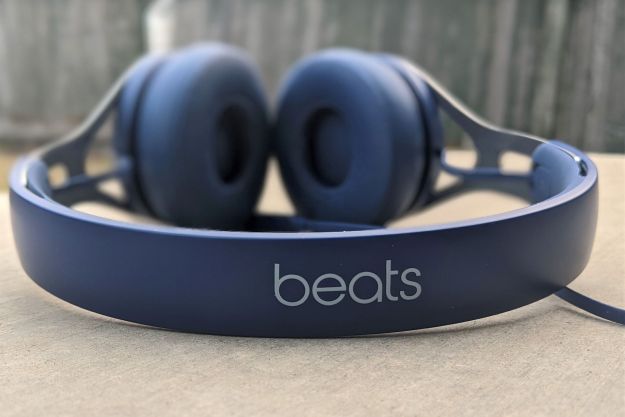 “Though they sound great, the Beats EP are limited by a wire and complete poorly at their price.”

As an act of full transparency, I’ve been struggling with how to write about the Beats EP headphones for some time. They are wired headphones and deserve to be treated as such. Yet at the same time, they come with a price tag that puts them closely alongside budget wireless headphones, most of which come with features and capabilities that just aren’t possible with the Beats EP.

Perhaps that’s the best way to write about the $130 Beats EP. They’re not the audio juggernauts that higher-end wired options oftentimes are, and they’re not the features-first wireless cans that seemingly surround them. They’re somewhere in between, awkwardly in the middle of two distinct parts of the genre.

Truthfully, I could wrap up this section of the review in two words: Not much. Other than the headphones themselves, the contents of the Beats packaging include a foldable carrying pouch, a quick start guide, and a warranty card.

Objectively speaking, the minimalist style of the EP packaging isn’t a major problem. After all, wired headphones are fairly self-sufficient, with no battery to charge and the only cable it needs already attached. But in a modern age where 3.5mm audio jacks are a rarity in phones, it would have been nice to include a smartphone adapter. Because, if you’re like me and lost the USB-C adapter that came with your phone years ago, the Beats EP are relegated to being exclusively desktop cans.

It’s literally a matter of plugging in and pressing play, then it’s off to the races with your favorite podcast or album.

I usually cover connectivity in this section as well, and one of the perks of the Beats EP is how classically simple they are to get up and running. It’s literally a matter of plugging in and pressing play, then it’s off to the races with your favorite podcast or album.

First, the good: The Beats EP are reasonably lightweight, though you won’t be able to find exact numbers on Beats’ website.  They come in several different colors, including white, blue, black, and red, which gives them a more diverse aesthetic that should meet the tastes of most consumers. And they’re fairly comfortable — I tend to enjoy the more encompassing coziness of over-ear headphones like the Razer Opus, but as far as on-ear headphones are concerned, the Beats EP felt good pressed against my ears for longer listening periods.

As far as on-ear headphones are concerned, the Beats EP felt good pressed against my ears for longer listening periods.

Now for the head-scratching: On its website, Beats says the EP have a “durable frame” that is “reinforced with stainless steel and adjustable vertical sliders.” This isn’t false, but it may be misleading. The EP, while lightweight, do not feel like incredibly sturdy headphones and that concern grows larger when you read the several Amazon customer reviews complaining of these headphones faltering less than a year into owning them. Some had issues with the headband snapping, and others mentioned deterioration of earcups. Now, I haven’t tested the Beats EP long enough to decidedly say they lack durability. But with the somewhat flimsy feel of these light cans, I could understand why so many folks have had issues.

My other issue with the Beats EP, as unfair as it may be to point out, is the concept of budget wired headphones overall. I believe there’s still an important place for wired cans, especially when it comes to higher-end options like the Grado Labs Hemp headphones, the V-MODA M-200 studio cans, or gaming headsets like the HyperX Cloud Revolver S. But at this price, the Beats EP and their fixed cable don’t offer the flexibility that I think most folks interested in buying them might want. For $30 less, you can choose between wired or wireless with the Avantree Aria Pro, though there may be some sacrifices in terms of audio quality. The point is, as necessary as wired connections are in some situations, I believe the cable-only setup of the Beats EP hurts them when compared to similar budget headphones with multiple connection options.

This is not a joke — the only technical specs available on the Beats EP’s page are the fact that they are on-ear headphones. So, please excuse me if this segment is rather brief.

The Beats EP do have inline call and music controls, plus inline volume controls. They are effective and easy to use, allowing me to pause YouTube clips or podcasts episodes without toggling back to those pages to do so manually. They also have a built-in microphone that proved to be very useful during Zoom calls, at least after I got my desktop to cooperate.

Beyond that, though, the Beats EP are scarce in the features department. It’s such a dire situation that Beats markets these headphones as having an “unlimited playback,” since they don’t have a battery. Which, okay, that is true. But it’s not exactly anything noteworthy, since that’s the main difference between most wired and wireless headphones. Heck, technically, you can get “unlimited playback” out of these $10 Sony headphones. If this is the Beats EP’s most noteworthy feature, that speaks volumes for what kind of value these cans actually are.

From my perspective, the sound of the Beats EP is the single biggest reason to buy these headphones instead of a wireless alternative. For $130, you’re getting quality audio out of the Beats EP, even if you are physically tethered to the device it’s coming from.

Vocals are remarkably clear and shine through in busy tracks like Maroon 5’s Sunday Morning. Higher frequencies are crisp but not harsh, which can be a tough line to toe for headphones at this price. They are a tad bass-forward, which may be a turn off for folks hoping for a completely neutral sound from their headphones, but is on-brand for the Beats sound signature. If you’re not a huge bass head, luckily I don’t think it’s prominent enough to be considered an issue. Overall, they’re mostly well-balanced headphones with great sound quality that would satisfy most people hoping to spend in this ballpark.

Another note about the sound of the Beats EP: They are impressively good at reducing environmental sounds and creating a quiet space in which to listen to your content. By the very nature of these headphones, they don’t have active noise cancellation capabilities but I’d argue that it’s not missed since the Beats EP do a commendable job of passively blocking out excess noise.

For $130 wired headphones to be competitive with wireless alternatives, they need to have great sound. The Beats EP have that, and even if they don’t have much else, it might be enough for certain buyers.

For a wireless alternative, the $100 Avantree Aria Pro give you decent active noise cancellation and improved flexibility over the Beats EP, though they likely won’t sound as good. If you can spend considerably more, it might be wise to consider the $250 1More Triple Driver over-ear headphones. They’re an improvement over the Beats EP in most ways, but they will cost you more than twice as much.

They haven’t fallen apart on me, so I can’t say they’ll fall apart on you. However, if their build and others’ experiences are any indicators, I’d be extra careful about the way you handle the Beats EP.

Only if you’re after sound quality that wireless headphones in this price range can’t match. Otherwise, enjoy the versatility of a wireless option, or spend more to get a better pair of wired cans. The Beats EP make sense for some, just not most.