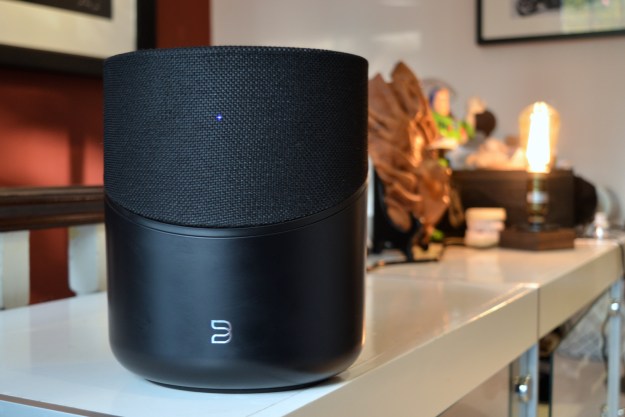 “Powerful, and detailed, it's a versatile speaker for demanding listeners.”

When it comes to multiroom audio, the undisputed king is Sonos. But discerning music listeners will tell you it’s not the only game in town.

Canada-based Bluesound has been quietly competing with Sonos for years, largely on the promise of better sound quality. Its latest product, the $449 Pulse M, is a compact speaker that can take on a variety of duties. You can use it on its own, use two of them as a stereo pair, or make them the surround channels of a much larger Bluesound home theater system.

But when you consider the Pulse M’s strengths, as well as its weaknesses, is it truly a Sonos rival? Let’s check it out.

Design-wise, the Pulse M looks a little like the portable $399 Sonos Move (though shorter because it lacks the Move’s giant battery), and its oval size and shape is also reminiscent of the $379 Bose Smart Speaker 500 (previously known as the Home Speaker 500). And just like those products, the Pulse M comes in two color choices; black or white.

With its gentle curves, satin-finish plastic, and fabric grille, you’ll have no problem integrating it into almost any room or decor, but you may want to avoid sticking it on a shelf.  The Pulse M has an internal woofer and two tweeters — these are angled outward at 45 degrees, giving it the ability to reproduce stereo — but placing barriers beside the speaker could prevent it from sounding its best. The Sonos Move can automatically re-tune itself when you change its location; the Pulse M can’t.

A set of touch controls for playback, volume, and five favorite presets adorn the top panel. These stay dark until they sense your hand approach, which is a fun trick. But you may want to resist actually using those controls — the surface has a glossy finish that quickly becomes a mess of oily fingerprints, especially if you get it in black.

In an era of ubiquitous smart voice assistants, Bluesound has opted to take a balanced approach. The Pulse M is not a smart speaker — there are no onboard mics — but it does play nice with Amazon Alexa, Google Assistant, and Apple’s Siri if you already have one or more of these smart speakers in your home. That’s a pretty big contrast to both Bose and Sonos, which have been integrating full smart speaker functionality into an increasing number of their products.

Where the Pulse M really stands apart on the hardware front (beyond its driver setup, which I’ll talk about in a moment), is its impressive support for accessories. On the back panel, right above the power input, you’ll find a gigabit Ethernet jack, a USB-A port, a 3.5mm headphone jack, and a combo 3.5mm analog/digital optical input (there’s an adapter in the box if you need one). When you tack on the speaker’s ability to accept dual Bluetooth connections for audio input and output (with aptX HD on tap as a bonus), it absolutely crushes any other multiroom speaker at this price. I genuinely don’t know how often folks will want or need to use these connections. But if they matter to you, they’re kind of a big deal — you won’t find this level of flexibility on any Sonos or Bose product. Better yet, anything that’s connected to these inputs can be shared across any other Bluesound products you may have in your home.

The entire Bluesound family of connected speakers is known for its comprehensive support for a huge variety of both lossy and lossless audio formats. These include FLAC, WAV, AIFF, and also MQA, which Tidal uses for its highest-resolution Masters tracks. Combined with support for lossless hi-res audio up to 24-bit/192kHz, it’s easy to see why the audiophile community has embraced Bluesound over Sonos and Bose, which have largely ignored these kinds of audio sources. Audiophiles may be the only ones that care, but not only can the Pulse M process hi-res audio, it can also render the full frequency response of 20Hz to 40kHz defined as “hi-res.”

In order to get that 24/192 support, you’ll need to stream from a music source that’s supported within the BluOS app. It’s a generous list — second only to Sonos in its size — and includes some top hi-res and lossless services like Tidal, Amazon Music, and Qobuz.  But it’s still missing some major players: Apple Music, YouTube Music, Pandora, and Soundcloud, to name the biggest. The only way to stream these services is to use their native apps on your phone and then connect to the Pulse M via AirPlay if you use an Apple device, or Bluetooth if you’re on Android (Bluesound speakers don’t support Chromecast built-in). Neither of these streaming protocols supports hi-res lossless audio, though AirPlay can certainly handle CD-quality lossless.

Again, perhaps only audiophiles will care about those details. After all, CD quality sounds pretty darn good. Still, there are practical reasons for wanting your favorite streaming service to work inside the BluOS app — the biggest being that it lets all members of your family access and control that music without needing the music service app on their phone, or their own subscription. It also lets everyone create their own BluOS favorites and playlists that are independent of the ones you create inside the music service.

When it comes to managing BluOS speakers and components, the BluOS app is a powerhouse. There are layers upon layers of settings, for everything from gain control on tracks and albums, to adjusting bass and treble EQ, to being able to name your optical and analog inputs. Honestly, it can be overwhelming at times. There’s just so much going on — even for someone who reviews these kinds of products for a living.

Still, once you get used to where everything lives, you feel like there’s nothing you can’t do with it, and on my iPhone 14 it was very fast and responsive, even when cruising through hundreds of albums on my NAS drive. If I’ve got one complaint it’s that there’s no universal search. To find the music you want, you first have to choose the source. Once you do, you can use the built-in search feature to quickly find what you want, but if it’s not there, you’ll have to repeat the process inside each source. Sonos’ universal search is far better for those of us with scattered brains and low levels of patience.

OK, enough about the tech. How does this speaker sound? Impressive. Bluesound, with its roots in the audiophile worlds of PSB and NAD (two of its sister brands) has a reputation for delivering flat (or neutral) EQ and the kind of power you can crank to its limits without worrying about distortion. The Pulse M stays true to that tradition, with an absolutely razor-sharp high end that is incredibly clear and a surprisingly beefy bass for its size.

You’ll want to listen to this speaker at 50% volume or louder for a true appreciation of its capabilities. At lower volumes, bass tends to get suppressed, leaving you wanting more. But turn it up and you will be rewarded with fantastic details.

The twang of Mark Knopfler’s guitar in Dire Straits’ Six Blade Knife slices through the air, and Billie Eilish’s whispery vocals on Bad Guy are never once muddied or hidden by that song’s throbbing bass line.

However, the Pulse M’s emphasis on higher frequencies can be, at times, too much for me. Listening to bbno$’s edamame was uncomfortable, as the crystalline highs became piercing instead of pleasing. You can manage this to an extent with the Pulse M’s tone controls, but I still found myself wishing for a bit more midtone presence to balance it all out.

Those angled tweeters I mentioned earlier do exactly what you’d expect, projecting sound outward in a wide soundstage that is far more immersive than both the Sonos Move and the Bose Smart Speaker 500. Whether you’ll hear a genuine stereo image might depend on where you place it. I found that if I put it near a corner of a room (but not deep in the corner), that helped a lot, whereas a more central location tended to reduce the effect.

$449 may be a lot to spend on a smallish speaker, especially when you consider your other choices, but those who are intensely critical in their listening experiences (you know who you are), will enjoy the Pulse M’s sound far more than similar offerings from Sonos and Bose.

If you’re looking for a compact speaker that delivers reference-quality sound and the ability to work with a huge number of lossless, hi-res audio sources either on its own or as part of a larger, multiroom setup, the Bluesound Pulse M should fit the bill nicely.