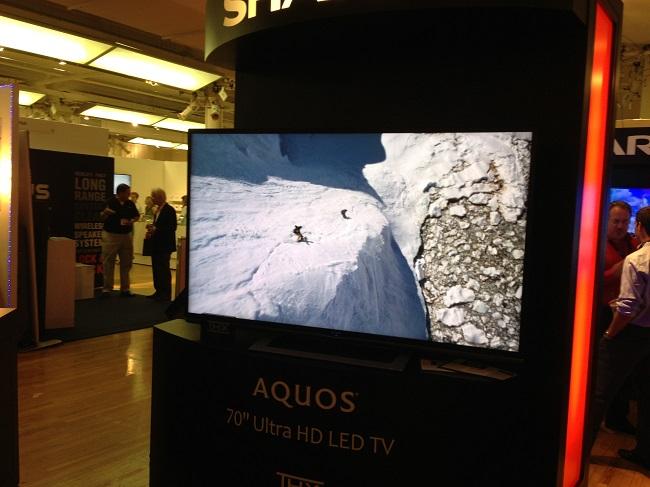 Ultra HD 4K is all the rage right now in the world of consumer televisions, but is that enthusiasm limited to manufacturers and the  press who desperately need something to talk about now that 3D is skulking in a corner? The folks at Sharp have a lot invested already in their large-screen HDTV business, but we think it may take more than pithy George Takei commercials to make consumers boldly go where no HDTV has gone before.

Sharp took center stage early this morning at CE Week in New York City with the introduction of its 70-inch LC-70UD1 Ultra HD 4K LED TV which will be available for purchase by the beginning of July for $8,000. But while we’re more than just a little skeptical about 4K at this point, there is no question that Sharp’s flagship Aquos Ultra HD 4K set is a stunner.

We have to give Sharp top marks for the aesthetic design of this TV. The LC-70UD1 features a sleek looking metallic bezel and base that will make the set stand out in any setting. Does the design differentiate it from competing 4K Ultra HD products from Samsung and Sony? Not really, but it raises the bar for Sharp which has lagged in that regard, and we doubt that any consumer would object to having such an attractive piece of industrial design on their wall at home.

The 4K LC-70UD1 features a dual-core processor to handle its native 3840 x 2160 resolution and the upscaling of non-4K content. While we’ve seen a few products from various manufacturers that do a relatively good job with Blu-ray, we’re not ready to tout the picture quality of your legacy sources or even the quality of HD television content at that resolution. At least not yet.

Sharp has packed a lot of features into the LC-70UD1 including 4 HDMI 1.4 inputs, 2 USB 2.0 inputs, an SD card reader, optical digital output, and one of the best looking user interfaces that we’ve seen so far from any of its Aquos models.

The LC-70UDI also features a six-driver audio speaker system, including Sharp’s DuoBass subwoofer system that is built into the front bezel of the set.

The aforementioned user interface utilizes Sharp’s redesigned Smart Central hub which includes a split-screen web browser, all of the major media streaming apps, and the ability to surf the web and watch TV at the same time.

Control apps for both iOS and Android devices are already available from Sharp and look intuitive and easy to use.

One of the coolest features integrated into the LC-70UD1 is its wallpaper mode which transforms the set into a 4K picture frame without having to turn the set on. The feature is accessible via the remote or control app and utilizes a minimal amount of power. A library of 4K images will be pre-loaded on each set, but users can upload their own from their mobile device or via the TV’s SD card reader.

If 4K Ultra HD represents the new age of HD television, then Sharp is off to a great start with the LC-70UD1 which had deep black levels, fantastic color accuracy, and eye-popping resolution. However, with zero content aside from pretty montages of the rolling countryside and birds in flight, it’s almost impossible to describe with any degree of accuracy how the set looks with any television or film content.

With all the uncertainty surrounding 4K content delivery, we still think it’s too early to jump on the 4K Ultra HD bandwagon, but we’re encouraged by the quality of Sharp’s first offering and what we consider a reasonable asking price considering the  LC-70UD1’s current competition.