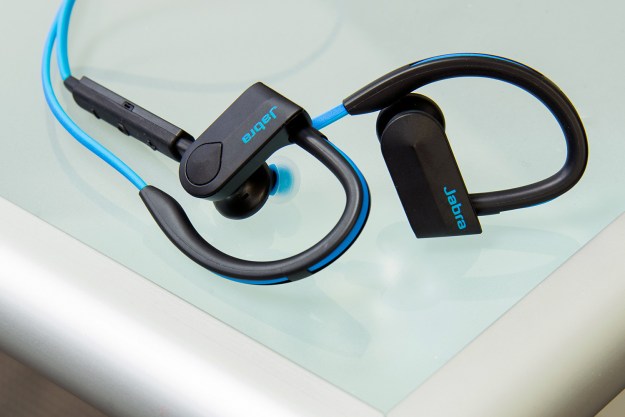 “Jabra’s Sport Pace get better sound, but lose the sensors that made this line unique.”

First the Sport Pulse, then the Sport Coach, and now the Sport Pace. Jabra’s repeated forays into sport-centric Bluetooth earbuds could be likened to a mechanic who keeps tweaking an engine until it sounds just right. An apt analogy, if only because the Sport Pace Wireless exist almost exclusively to correct one particular issue: sound leakage.

With the Sport Pace Wireless, Jabra is hoping the third time’s a charm. The company doesn’t come out and say it like that, but the implication is pretty clear when this product comes a mere four months after the recently-released Sport Coach. Our experience with the Sport Pulse and Sport Coach was almost entirely positive, but the lack of a good seal within the ear resulted in a lot of leaked sound and underwhelming sound quality. Did Jabra finally get everything just right? We gave the Sport Pace a workout while we got a few of our own to find out.

We were hardly surprised that Jabra used virtually the same packaging as it did with the two previous models. Upon lifting the front panel, the new-look buds were visible through the box’s plastic compartment. Below that is a box with the other two pairs of fittings (eargels, as Jabra calls them) and a short micro-USB cable for charging the Sport Pace. Conspicuously missing is the small carrying case that has been a staple of this line of wireless earbuds. We suspect the reason why is because the new design would make them really difficult to stuff in there. When we tried to do it with the case that came with the Sport Coach, our assumptions were proven true.

Curiously, the Quick Start Guide is also missing a code to freely download the Jabra Sound app for iOS or Android. The Jabra Sport Life app, which is far more important to the daily functions of the Sport Pace, is free to download, but even still, we were a little surprised by that omission.

Our review unit came in blue with black trim. Yellow and red are also available. A noticeable deviation from the previous two form factors, the Sport Pace now have over-ear hooks acting as anchors to hold the buds in place – an adjustment we’d later learn ultimately helps contribute to better overall sound quality – and though we got more consistent placement of the buds, the design change comes at the expense of subtlety. The Sport Pulse and Sport Coach were lower profile earbuds, and though they performed most of their functions admirably, they lacked a proper seal for noise isolation. We take the Pace’s change in design as Jabra’s compromise to make sure getting a secure fit and a proper seal is never an issue.

The Sport Pace now have over-ear hooks acting as anchors to hold the buds in place.

The earbuds’ 15-inch cable appears shorter than its predecessors, but it actually isn’t since the balance is taken up by the new ear hooks. It’s also flatter and slightly more rugged than the others. The clip to shorten the cable’s slack is already attached out of the box, which is another welcome difference – just be careful not to lose it as no replacements are included.

As expected, the same inline remote is situated on the right side of the cable. The main button is flanked by volume buttons and a microphone for calls and voice commands through Siri or Google Now. The main button doubles as the power button when holding it down for about four seconds (two-to-three seconds gets you Siri or Google Now). Playback and skipping controls are exactly the same, too.

Jabra doesn’t explicitly mention what sensor is embedded to track movement because there isn’t one. The Coach had TrackFit, while the Pulse had an in-ear heart rate monitor, but the Pace hands things off to the GPS on a paired smartphone. While it can’t track location and route while in a gym, it collects data on pace, distance and calories burned. When outside, it covers them all.

Instead, pressing the “sport life” button on the left earpiece triggers a voiceover update on your progress. It can also trigger the Sport Life app when another app is front and center on the smartphone. Holding it for a second can start or pause a workout. Double-tapping it disables all voiced updates. Outside of that, the button does nothing else.

In skimping a little further to keep the price down, Jabra left out NFC for quick pairing, but does allow for two devices to be connected to it at once. An IP54 rating makes the headphones resistant to rain, shock, sand and dust.

Without NFC, we paired the Sport Pace the old-fashioned way. The earbuds go into pairing mode immediately on startup, and in short order, we paired to both an iPhone and an HTC One M9. Voice prompts confirmed everything, just as they always have.

Jabra seemingly forgot to add some volume out of the gate.

From here, setup with the Sport Life app is not all that different from how it’s been done before. We could go right into a workout, as simple as a walk through the mall, or multifaceted one that included the bike, cross-training and treadmill at the gym. Jabra allows for customization to add your own activities, and we already had some, like elliptical and rollerblading, set up. We then added yard work as another while testing this out.

The app has always been straightforward, and hasn’t changed much, so moving from the Pulse or Coach to the Pace requires no learning curve. Newcomers won’t have a hard time getting around, either.

Where the heart rate monitor and TrackFit sensor were meant to be spotters with the others, the Pace is more about providing the simple metrics. It doesn’t go into detail about any exercises, focusing primarily on the pace, distance, duration and goal of the ongoing workout. While this might seem like something’s missing, it arguably liberates the Pace from being too linear.

Jabra lists some of the compatible apps on the back of the box — Endomondo, RunKeeper, Runtastic and Strava, among others — and with good reason. The Pace could work perfectly fine with these apps, too. So could the Pulse and Coach, except in this case, the Pace doesn’t have a defining component that Jabra likes to keep closer to the chest. They just stick to the tracking basics, making these buds distinctively utilitarian.

But that has us wondering what specific benefit the Sport Pace offer over any other Bluetooth earbud? Lots of folks make good-sounding, secure, wireless sports headphones. Why buy the Sport Pace vs. anything else when they don’t gather any data your phone/apps can’t gather on their own?

Speaking of defining components, audio quality is arguably the defining characteristic that separates the Pace the most. The new design largely — though not entirely — solves the noise bleed bugaboo of the past.

Why buy the Sport Pace when they don’t gather any data your phone/apps can’t get on their own?

The positioning of the buds is the main reason why. And for the first time, we didn’t bother reaching for a pair of gels from other manufacturers to try and plug the gaps. The result is one of compromise, however, because Jabra seemingly forgot to add some volume out of the gate.

A past consequence of the noise bleed was that the bass lost its presence, which could be a deal-breaker for those blasting hip hop or electronica. The Pace salvages more of that, but we needed to pump up the volume to get the right balance, constantly going more than three-quarters of the way up on both phones to get a feel for the tunes and drown out background noise.

The louder the background, the closer to full blast we needed to go. Granted, every set of ears is different and ours might have been a little less sensitive, but we were puzzled as to why more wasn’t done to crank up the volume by default.

We had nothing to really complain about with phone calls, finding voice quality and usability consistent with what we saw in prior iterations. Making and taking calls is easy, and integration with Siri and Google Now were each convenient to use while wearing the Pace.

Battery life showed no improvement, maxing out at about four hours, sometimes even less. Jabra rates it at five hours, except having to regularly push the volume up almost certainly contributes to the faster drain. To help offset that, the company does include rapid charging, which provides 60 minutes of usage after only 15 minutes of charging. That’s super convenient on a low battery before heading to the gym, but again, higher volumes all but assured we wouldn’t make it the full 60.

Jabra prefers to look at the Sport Pace as a complementary product in a growing line of wireless earbuds, but we’re not totally sold on that. We see the Pace as fixing an inherent issue the other two couldn’t manage, and that was tightening things up enough to keep music from filtering out.

The Sport Pace do that without all the frills Jabra’s other two models have, and that may be perfectly fine for anyone looking to keep it simple. At $100, they’re reasonably priced, and the combination of improved playback with the flexibility to work with more than just Jabra’s own Sport Life app, makes the Pace an intriguing choice for the fitness crowd.