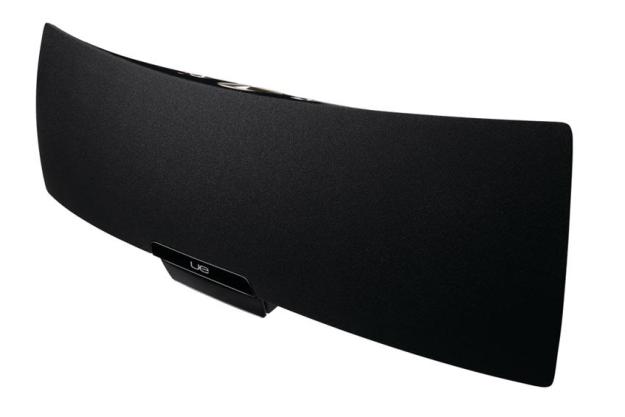 “To be fair to Logitech, the Zeppelin Air costs $200 more than the UE Air Speaker. But for an audiophile, that price difference is justified many times over.”

Logitech has a knack for acquiring good brands and leveraging the heck out of them. The company acquired Ultimate Ears headphones in 2008, and now it’s putting that logo on its first AirPlay-compatible iPod speaker dock, the UE Air Speaker. Logitech is no stranger to wireless audio streaming, having acquired Slim Devices and its legendary Squeezebox product line two years prior to the UE acquisition. In fact, we’re surprised that it took Logitech so long to jump into the AirPlay space. Now that they’re here, it’s time to discover if they’ve delivered anything special.

The UE Air Speaker is fabricated largely from glossy black polycarbonate and ABS plastic, with a batwing front and a curvaceous body in the back. A large volume control wheel and two smaller buttons for mute and power are mounted on top of the device. All three of these aluminum knobs are hidden from view when you’re looking straight at the speaker. There’s an Ethernet port and a 1/8-inch aux input in the back. Stretchy nylon fabric covers the entire speaker grill in front. The Air Speaker’s enclosure houses two three-inch woofers and two half-inch tweeters.

We’d like to be able to report from what material the drivers are fabricated, what type of amplifier is driving them, and how many watts the amp delivers to each channel, but Logitech declined to provide that information. Well, to be fair, they said they could “track down details” only for the number and size of the woofers and tweeters, the material the cabinet is made from, and the fact that the knobs are aluminum. Logitech was also unable to track down details as to which digital-to-audio converter is in use, if there’s more than one amp in the cabinet, if the Air Speaker is performing any other audio signal processing, whether the dock taps the iPod’s digital or analog audio output, and whether or not the company is using the Bridgeco DM870 networked media processor to handle wireless media streaming (although we’re unaware of any other component capable of performing that function).

A retractable docking port front and center can accommodate an iPod, iPhone, or even an iPad (although we had a little difficulty properly lining up the connector with our iPad 2). You can play music from a docked device or just charge it (even while streaming music from another source over the network). We applaud Logitech’s decision to use an inline AC power brick instead of the far more common—and far more obnoxious—wall wart, but we’re disappointed that the company didn’t build a Li-Ion battery pack, as iHome did with their iW1 (since superseded by the iW2).

The Air Speaker doesn’t come with a remote control of any kind–Logitech apparently assumes you’ll use your playback device for that. That’s a logical enough assumption; the only problem is your playback device won’t always be in the same room as the speaker. Imagine a situation where you’re streaming music from iTunes running on a desktop computer, server, or NAS box in your home office to the speaker in your kitchen or living room.

Setting up the Air Speaker is a simple process made even simpler by using an iOS device to connect the speaker to your network. While the user manual indicates that all the wireless devices must be connected to the same network, we found that they must also be connected to the same wireless access point—at least initially. We have several wireless access points in our test environment. There’s one in the router itself, of course; but to cover our entire 2,800-square-foot home, we also operate a second AP in our home theater, and a third in our home office.

We installed the Air Speaker in our home theater, but when we tried to control it from iTunes running on our MacBook Pro—which is typically linked to the AP in our home office, AirPlay complained that not all the devices were operating on the same network. Once we connected the MacBook Pro to same AP that the speaker was using, everything worked as advertised. We didn’t have that problem with the computer hardwired to the network, and we were also able to switch the notebook back to the other AP (although we encountered audible dropouts, which we attribute to the computer being outside the home-office AP’s range).

Once we had the Air Speaker set up, it was time for us to evaluate its audio performance. We used a diverse collection of music that has one thing in common: It was encoded in Apple Lossless with 16-bit resolution and a 44.1kHz sampling rate. (If your music library is encoded in FLAC, you’ll need to convert it–that’s just the nature of AirPlay.) We acquired some of the tracks from Bowers & Wilkins’ Society of Sound music-subscription service (which also offers some of the same albums in 24-bit/48kHz FLAC); others we ripped from CDs. We also conducted A-B-C comparisons with two other AirPlay compatible audio devices bracketing the Air Speaker’s $399.99 price tag: iHome’s iW1 speaker ($236 online) and Bowers & Wilkins’ Zeppelin Air ($599 online).

Listening to the Dub Colossus track “Crazy in Dub,” from the band’s second album, Dub Me Tender, we found that the Air Speaker boasts good clean bass response, but it doesn’t produce a thump you can feel in your solar plexus like the pricier Zeppelin Air delivers. All things being equal, we did prefer the Air Speaker’s bass response to that of the less-expensive iW1.

Moving about as far as one can get from Ethiopian-pop/dub-Reggae fusion, we then put on the a cappella “Alleluia,” from conductor/composer Eric Whitacre’s new album of classical music Water Night. This beautifully spare composition for full choir could convert the most avowed atheist into a bible-thumping true believer, and it sounded fabulous on the Air Speaker. Thanks to its larger amplifier and speakers, the Air Speaker did a much better job of filling our 247-square-foot home theater with sound than did the iW1, and it did a much better job of distinctly rendering the vocal ranges, from baritone to soprano. Here again, however, the Zeppelin Air delivered the best performance of the three.

Logitech’s UE Air Speaker sounds better than iHome’s less-expensive iW1 (we haven’t reviewed the iW2), but it lacks that portable speaker’s built-in battery. The Air Speaker’s audio quality is very much inferior to the pricier B&W Zeppelin Air, but we don’t know if that’s because B&W is using a higher-quality amp, better drivers, or if that speaker dock is just doing more to massage the audio signal (whether it’s streamed over the network or from a docked device). We do know that the Zeppelin Air upsamples the digital audio signal with a sample rate converter prior to converting it to analog, and that the digital-to-analog conversion is performed by a high-end DAC.

To be fair to Logitech, the Zeppelin Air costs $200 more than the UE Air Speaker. But for an audiophile, that price difference is justified many times over. Our advice: Don’t let that $400 burn a hole in your pocket. Hang onto it until you’ve saved another $200 and buy the Zeppelin Air, instead.

Topics
Peacock does away with free tier for new subscribers
Klipsch follows the success of The Fives with The Sevens and Nines powered speakers
Marshall’s latest Bluetooth speaker has four drivers for 360 sound
The best waterproof Bluetooth speakers for 2023
Showtime is being merged into Paramount+
Sling is now 50% off — stream live sports without cable
Everything leaving Hulu in February 2023
Is there a Sling TV free trial? Here’s what you need to know
What’s new on Apple TV+ this month (February 2023)
YouTube TV loses MLB Network and MLB.TV add-on
YouTube TV: plans, pricing, channels, how to cancel, and more
Apple’s MLS Season Pass is about more than just streaming games
Best 75-inch TV deals: Get a large screen for the Super Bowl