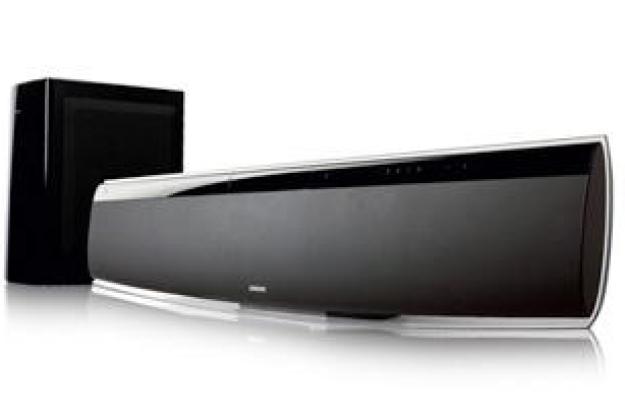 “...we have no qualms about recommending it wholeheartedly for owners of 40-inch or larger HDTVs ...”

The Samsung HT-X810 was one of the coolest soundbars announced at CES 2008, mostly because of the 5.8GHz wireless subwoofer. That plus Bluetooth connectivity, a USB port, HDMI output, and an on-board DVD/CD player put it ahead of most competitors, and the glossy black styling matches Samsung’s HDTV line (especially our 40-incher) perfectly. At nearly $700, it isn’t an entry-level product, but it’s a lean, mean home theater system that can eliminate a lot of the clutter of more traditional setups.

The HT-X810 consists of a full-size soundbar (39.3 x 7.1 x 5.6 inches) and a large powered subwoofer (10 x 12.7 x 16.2 inches). The bar has a straight front that curves very gently, while the back is a convex arc, and its width is the same as that of our 40-inch Samsung HDTV. The soundbar taller than many of the other models we’ve seen, but it blends in very nicely in our living room.

On the front face along the top, there’s a small blue LED readout, a door for the slot-loading DVD player, and a series of touch-sensitive controls. Behind the black metal grilles is a pair of full-range speakers (75W each). On the back are outputs for component video, composite video, and HDMI, as well as analog (RCA) and optical audio inputs and a coaxial antenna connector. There’s a 3.5-mm audio input jack and a USB port for connecting a camera, MP3 player, or flash drive on the unit’s right side.

We’re impressed with some of the soundbar’s extras: Built-in Bluetooth lets you wirelessly connect devices that support stereo Bluetooth for audio playback. There’s also on-board digital FM tuner, which supports up to 15 presets. But most important is a 5.8GHz transmitter that sends low frequencies to the 150W subwoofer.

The included wireless remote has controls for the soundbar, but it can also control HDTVs from Samsung and several other companies. Unfortunately it’s not a universal remote, so we couldn’t use it to control our cable box. It runs on two AAA batteries (included).

Aside from performance, the key for any all-in-one home theater system is ease of setup, and the X810 comes through beautifully. All we had to do was plug in both components, connect the soundbar to our TV, and turn everything on. Sadly, the only cable that comes with the X810 is for composite video. For $700, we’d at least like component cables or better yet, an HDMI cable.

The soundbar automatically detected the sub and paired with it in seconds, indicated by the solid blue LED on the sub’s front. And since the system uses the 5.8GHz frequency band, you don’t have to worry about interference from WiFi networks or cell phones. Our only gripe is that you can’t turn the subwoofer on via the remote; you have to use the power switch on the unit’s back.

On the back of the main unit, there’s a pair of screw holes for the mounting studs and bracket, though screws for mounting the bracket onto your wall are not included. The system weighs 16.4 pounds, so mounting it is a one-person job.

The controls on the remote are a little less than intuitive, but the documentation provides adequate help. The soundbar’s menu system isn’t great, mostly because the LED readout is tiny and can be tough to see from 10 feet away; this was less of a problem when we used the soundbar’s HDMI output so we could see adjustments on our TV screen.

The X810 requires some patience: When switching inputs, it takes about 5 seconds after you press the button for the new input to start coming through the speakers. Also, any time you change audio settings, the sound cuts out for a few seconds. Loading and ejecting CDs and DVDs is also quite slow. And when the soundbar was connected to our TV via HDMI, it switched our TV’s input automatically when we put a CD in or connected a USB device, making it a chore to listen to music while watching a muted TV show.

Although these seem like minor quibbles, it prevents the soundbar from being a smooth operator.

We tested the X810 with a wide variety of content from our high-def cable box, the built-in DVD/CD player, a Samsung P2 portable media player, and our laptop. We used an HDMI cable to connect the unit to our Samsung 40-inch HDTV.

In general, we favored the unit’s P-Bass setting over the Audio Upscale, which sounded a bit thin despite being intended to interpolate missing info in compressed music. The V-Sound setting worked well for most music and movies, giving the impression of a wider sound stage. The Smart Volume feature seemed to do little more than raise the overall volume; we didn’t notice any “evening out” of levels between programs or content.

The video quality from DVDs via the X810’s built-in player was excellent across the board, and the unit easily adjusted automatically to our Samsung TV’s 1080p resolution.

The 2008 NBA playoffs in HD were a joy to hear through the X810, especially once we turned on the Smart Volume, V-Sound, and P-Bass features. The announcers’ voices were clear even through the intense crowd noise, which was partly handled by the powerful subwoofer. Some sounds appeared to be coming from beyond the right and left edges of the soundbar, indicating competent virtual surround processing.

Action movies like The Matrix had excellent impact; we didn’t need to adjust the subwoofer’s output to achieve explosive bass levels in the lobby shooting-spree scene. Dialogue was exceptionally clear despite the lack of a center channel, though for some movies (notably Lord of the Rings: Return of the King) we had to tweak the audio settings to improve balance between action and talking.

The subwoofer produces such beefy bass that we actually had to reduce its output slightly in the Sound Edit settings for acoustic jazz, folk, and blues tracks. But for most other music, including reggae, R&B, soul, rap, and rock we left the subwoofer output at the default setting. Our overall impression of the sound is very positive for any genre.

Although the Sound Edit menu gives you access to the subwoofer level and the soundbar’s left/right balance, there are no treble and bass tone controls. Luckily the X810’s highs and mids are powerful and clear enough that we didn’t mind the lack of granular control.

We connected our Samsung P2 portable media player to the soundbar’s USB port, but the soundbar only reads content from devices that support USB Mass Storage, so it was a no-go. Our Sony Walkman NWZ-S718F, however, worked fine, and we used the low-budget-looking menus displayed on our TV to navigate the player. The sound quality of the USB input was indistinguishable from that of the soundbar’s built-in CD player.

We were pleasantly surprised by the sound quality of Bluetooth audio when we paired the Bluetooth-equipped Samsung P2 — a very simple process, since the X810 automatically goes into discoverable mode when you switch its input to BT Audio. Most musical genres sounded better than we anticipated, given Bluetooth’s heavily compressed signal, though acoustic jazz still suffered from audible distortions in cymbals.

The FM tuner performed admirably once we connected the external antenna, picking up stronger local stations (WNYC 93.9FM in New York). Some people might be disappointed by the soundbar’s lack of XM or AM support, but that’s not a dealbreaker for us.

The X810 isn’t cheap at around $700, but given its extensive features and excellent sound quality, we have no qualms about recommending it wholeheartedly for owners of 40-inch or larger HDTVs from any manufacturer. That said, we’d like to see future iterations have a more polished TV-screen menu, a larger on-board display, and faster switching for inputs and audio settings.