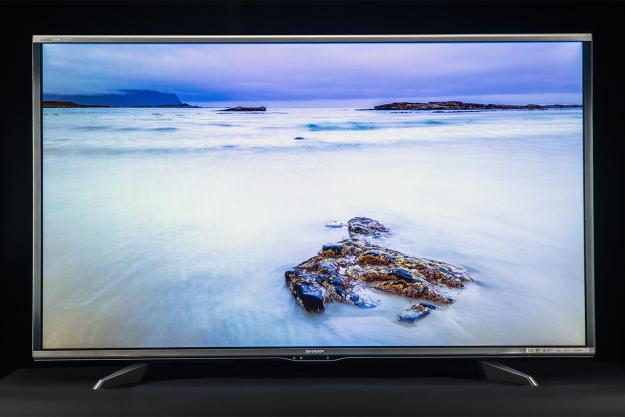 “While not without its flaws, if you love a bright, gorgeous splash of color, the UQ may be up your alley.”

Sharp UQ17U Series information: This review is based on our hands-on experience with the 60-inch LC-60UQ17U TV. However, our observations also apply to the 70-inch and the 80-inch models in the UQ17U Series. According to Sharp, the 3 sets differ only in dimension and weight and offer identical features and performance.

In the haze of the Ultra HD 4K explosion at this year’s Consumer Electronics Show (CES), Sharp unveiled what it called its “game changer,” the Aquos Q+. The display, which comes in three tiers, was touted as something of a hybrid between HD and UHD, able to accept 4K content, and packed with digital processing to achieve a resolution that is claimed to look better than 1080p HD.

However, we’ll settle the 4K mystery right here and now: The Q+ is not an Ultra HD TV, and it isn’t really any sort of hybrid, either. For all intents and purposes, the Q+ does not accept 4K content from any source you’re like to have as it is limited to HDMI version 1.4, nor does it support Ultra HD from streaming sources like Netflix. Further, as Sharp engineers pointed out before the top-tier UQ17U (UQ) arrived in our offices, the Q+’s higher resolution only pops on certain colors.

That said, the UQ is able to dazzle thanks to its generally vibrant color reproduction and clear resolution, and an intuitive smart TV interface, all of which may make it worth consideration among those looking for premium performance without the super-steep price tag.

While the UQ has a few extra features and claims better processing than its Q+ siblings, the TQ and SQ, the biggest aesthetic difference is the UQ’s titanium-brushed aluminum frame, which gives the TV an almost regal bearing. The thicker silver bezel blings out the top, then turns razor-thin on the sides, melting into black as it fades into the screen. It was immediately clear that Sharp’s UQ17U is one of its most attractive TVs on the market, and will no doubt impress the neighbors, even before the screen begins to glow.

We received the smallest of the UQ family, the 60-inch model, though you’d never know it by picking it up. We definitely felt all of its almost 90-pound weight as we propped it on our credenza (we’re still not sure why it’s that damned heavy), but it felt pretty secure on its dual-pronged silver stand. Those who want to mount the TV may need help from a pro, especially if you move into the 70 and 80-inch sizes that round out the top of the UQ series.

Inside the box we found the usual accessories, including a pair of Bluetooth enabled 3D glasses, an instruction packet, and a long remote in the traditional wand design. Missing from the package was a trackpad-style remote control, something we’re used to seeing on higher priced TVs these days.

To go along with its sleek design, the UA17U is loaded with a bevy of connection points consistent with a TV of its class. At the side panel rest 4 HDMI ports and a USB port, while the back panel boasts a coaxial input, two composite inputs, a component input, a second USB port, an Ethernet port, and even VGA in and outs for PC connection. Audio connections include a digital optical output, and a 3.5mm input and output.

Though the TV’s single remote is nearly long enough to be used as a paddle, it works fine for basic navigation with intuitive hotkeys like a Netflix button, and one for the smart hub. However, dark room movie watchers will be disappointed to find the remote doesn’t have illuminated keys, something we expect at this price point.

The TV is packed with a massive amount of features. Beyond Sharp’s revamped smart hub, Smart Central 3.0. Marquee options include a claimed 240Hz panel (without the jarring “soap opera effect”), Bluetooth audio connection, active 3D, Miracast screen sharing, HD upscaling, and THX certification. The latter locks the TV into an optimal picture mode for both bright and dark room settings with little to no additional adjustment needed.

The Q+ achieves its highly-hyped resolution boost through specialized processing Sharp calls Quattron. Quattron adds a yellow subpixel to the usual red, green, and blue subpixels that make-up those little dots in standard TV screens. The inclusion of yellow adds 2 million extra subpixels to the standard 6 million you’ll find in other 1080p screens. But the Q+ takes things even further, splitting the subpixels in half horizontally for double the action, amounting to 16 million sub pixels that create a higher “effective resolution.” The processing is ostensibly engaged by turning on the Resolution Enhancement setting, which we set to Mode 1 as per Sharp’s recommendation.

As Sharp engineers stressed to us, however, the higher resolution only works for certain colors. The fine detail that you’ll see in a field of grain, or a skyscraper’s windows can ostensibly take advantage of the processing to show greater contrast and clarity. But red or blue color patterns, for instance, cannot be replicated using the extra yellow subpixel, and won’t be affected. Got that? Yeah, it’s a bit confusing.

Regardless of its effective resolution, Sharp has warily stepped away from the Q+’s 4K abilities, instead calling it the “highest resolution HDTV.” Bottom line: if you want to watch 4K content, buy a 4K-compatible UHD TV instead.

As mentioned, Sharp has spent some time (and money) on revamping its smart hub, Smart Central 3.0, and it shows. While the interface may not be as revelatory as LG’s webOS, it’s a step in the right direction, and we rather enjoyed it in our limited time with the system. Hitting the Smart Central key calls up an Apple-esque chirp of strings, cuing a banner of apps and services at the bottom of the screen. All the usual streaming suspects are present, except for the notoriously elusive Amazon Instant Video. We like the fact that it pulls up quickly from any input, though populating the different options wasn’t quite as snappy as we wanted it.

Selecting the Smart Central tile pulls you deeper into the system, where Sharp has organized its services into three main categories including TV, Streaming, and Apps. The first two allow for broad searching of content, and the system works pretty well. The main categories are also broken down into subcategories, like New, Popular, and Favorites.

There are some nice features here, like the ability to search for content without disrupting what you’re watching, choosing HD content only, and the available sidebar which shows you where you can get a show or movie, and what it will cost. While it may not be revolutionary, those with older Smart TVs should be impressed.

The UQ is an odd duck when it comes to performance, with more peaks and valleys than just about any upper-tier TV we’ve reviewed this year. The picture is vivid and bright, and it does some astonishing things, providing rich color and stark clarity. However, there are also some strange hang-ups which more discerning viewers may find vexing.

Some of our favorite moments came during Ridley Scott’s sci-fi/horror flick, Prometheus. There were a few particular points at which the boost in resolution seemed to have a dramatic effect. The scene in which David discovers the aliens’ holographic mapping system, for instance, was nothing short of stunning. Crystalline resolution emitted a vivid spectacle of laser projections, and the entire scene was bathed in brilliant color and light.

Another poignant moment came when David procures a drop of the poison goo and examines it on his android finger. The image is exceedingly clear, and gazing into the drip, we noticed an insidious broiling from within which we’d never really seen before. Pausing the scene allowed us to see the finest of details, like the silver-painted ripples at the edge of his fingerprints, and even a tiny hair.

However, it was during the same movie that we noticed the UQ’s trouble in the dark. The edge-lit screen shows a lot of bloom at the corners in a darkened room – the kind you’ll often see on LED TVs without some form of local dimming. And while the image is able to get inky black, it does so at the peril of shadow detail, which is crushed quickly into a flattened void. The issues are emphasized by uncommonly poor off-axis viewing. More so than most TVs at this price, the UQ demands you stay on center, or suffer the consequences of an extremely clouded image.

While watching Star Trek: Into Darkness, we also noticed the TV seemed to exhibit a lot more noise and blocky artifacts than other examples in its class. In particularly noisy moments, like the bar scene with Kirk and Admiral Pike, the blocky edges and busy movement on their faces were more evident than usual. Still, for the majority of content it was a non-issue.

To end on a high note, we must give high praise to the TV’s motion resolution. Although we noticed the same film judder you’ll see on virtually any LED panel, the UQ does an excellent job with fast-motion content, creating clear, fluid images that are easy to focus on without eye fatigue.

We’ve tested only one TV this year with audio chops we’d care to listen to unamended: Sony’s masterstroke X900B, which harbors a barrage of drivers in its side panels. Still, while nearly all flat panels struggle, the UQ’s audio performance ranks towards the bottom of its class, with paltry treble, and no real oomph in the midrange or below. Sharp boasts a 15-watt “subwoofer” on board, but it didn’t seem to help much.

Whether or not Sharp’s UQ17U TV is for you may depend entirely on your viewing habits. For us, the TV’s shortfalls in the dark and its poor off-axis viewing make it a precarious choice at best. However, if you love a big, bright, gorgeous splash of color, the UQ delivers like few others. To be sure, this is a great bright-room TV.

Regardless of these arguments, we’ll stress one last time: If there’s so much of an inkling of a chance that 4K is going to be important to you in the near future, we suggest ponying up the dough and buying in. Like Mike taught us in Breaking Bad, never choose a half measure — if you want 4K, it’s time to go all the way.