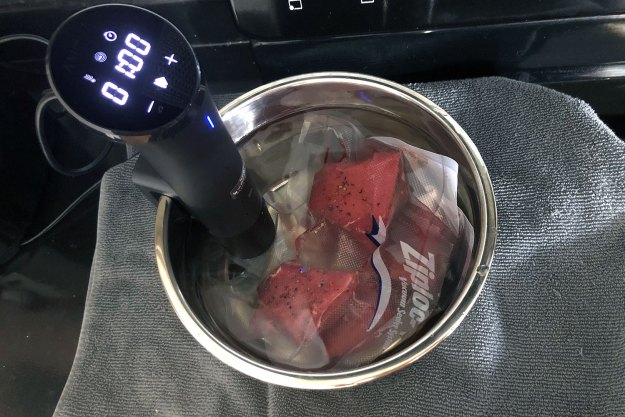 In the past, sous vide cooking was primarily reserved for fine dining restaurants, catering companies, and commercial food businesses. Over the last few years, though, home sous vide cooking has increased in popularity, as precision cooking devices like immersion circulators have become more affordable and accessible.

Anova recently released the affordable Anova Nano. The compact and easy-to-store sous vide cooker is only $99. We decided to test out the Anova Nano and see how it stacks up against other sous vide machines on the market. Here’s our take on the Nano.

Even the packaging is attractive. Once removing the sleeve on the outside of the box, you’ll find a nice-looking black box that contains the Nano, a user guide, and a fridge magnet with a temperature chart. Constructed of heat-resistant plastic, the Nano doesn’t look or feel cheap despite the low price tag.

The Nano is smaller than some of the other precision cookers, measuring only 12.8 inches tall. You can easily store it in a drawer or cabinet without having to worry about it taking up too much space. The larger Anova Wi-Fi is 14.75 inches tall, and other immersion circulators, like the Wancle Sous Vide Cooker and the Gramercy Kitchen Co Immersion Circulator, are larger than the Nano as well.

You haven’t experience steak until you’ve had it cooked in a Sous Vide machine.

The ChefSteps Joule is smaller than the Nano, at 11 inches. However, the Nano has a touchscreen display and controls right on the top of the device, while the Joule doesn’t have on-device controls, so you must control the cooker with your phone or tablet.

Although the Nano is small, it’s powerful enough to cook six to eight steaks at a time. The Nano is precise within 0.1-degree accuracy. The 750-Watt cooker will heat up to five gallons of water (20 liters) to temperatures ranging between 32 degrees and 197 degrees Fahrenheit. The water bath size on the Nano is about mid-range, with some immersion circulators supporting a larger bath size and others requiring a smaller size.

The Anova app (iOS or Android) is user friendly and easy to use and navigate. Once you create an account and set up your Nano, you can create and save your own recipes or use the ones on the app. It has lots of interactive recipes, and you pretty much just select a recipe and press start to get the machine to cook your food.

To use the interactive app, you must pair your Anova Nano with the app via Bluetooth. The Nano doesn’t have Wi-Fi. While the Bluetooth connection works well when you’re nearby, you can’t leave the vicinity and still control the cooker from your phone or tablet.

The lack of a Wi-Fi connection also means your device and your app may get out of sync if you make a last-minute change on the device’s touchscreen. If you set the app cooking settings, then decide to adjust the time or temperature settings on the device after cooking has already started, the app wont update to reflect that change.

Easy to use, easy to clean

The Nano is incredibly easy to use, and it gives you the option to cook with or without your phone or tablet. You can use the controls on the Nano’s touchscreen, or you can control the device with the app.

One issue with the Anova Nano is that the clamp isn’t wide enough.

To cook a food item, you just place it in a zip-closed or vacuum-sealed bag, add your desired seasonings, seal the bag, toss the bag of food in the water, and set the temperature and timer. The Nano attaches to the side of a pot via a clamp, and heats reasonably quickly. It took 13 minutes to preheat hot tap water from 111 to 140 degrees Fahrenheit when we made six steaks in two gallons of water. The Anova Wi-Fi does seem to preheat faster than the Nano though.

Cleanup is pretty hassle free. When you’re finished cooking, you just allow the machine to cool and then wipe it down with a clean damp cloth. If the machine has scale buildup or if it’s particularly dirty (perhaps an egg cracked while cooking) you can clean the machine more thoroughly. To do so, create a water bath of equal parts vinegar and water, clamp the machine to the side of the pot, and let the machine run in that solution for 30 minutes on 158 degrees Fahrenheit. You can also use a water bath that contains water and a small amount of dish detergent, which will clean the inside of the machine.

The best steak and eggs in the universe

You haven’t experienced steak until you’ve had it cooked in a sous vide machine. It’s nothing short of perfect. We’ve found that even people who don’t like their steak pink in the middle like it when it’s cooked sous-vide style. It’s so evenly pink throughout, yet it still has a soft meaty texture and it doesn’t taste or feel undercooked at all. After the sous vide process, you can sear the steak for a moment (which you can do in a frying pan, cast-iron skillet, or even a panini press), and get a picture-perfect plate. Soft-boiled eggs cook perfectly too. When you combine the two — steak Sous Vide and two soft boiled eggs — you have a five-star dining experience at home that requires very little effort.

You can cook other foods in a sous vide machine as well. Veggies and fish come out moist and delicious. However, not everything is meant to be cooked in sous vide machines. Some people don’t like the taste and texture of chicken cooked sous vide, for instance. Devices like the Anova Nano cook certain foods exceptionally well, as opposed to being all-in-one type devices that can cook anything and everything (like pressure cookers).

The method in which an immersion circulator stays in places is an important consideration. Does it fit on any pot in your cabinet? Does it stay in place securely? One issue with the Anova Nano is that the clamp isn’t wide enough, meaning it doesn’t fit on certain pots that have an extra-wide brim.

The Nano is a solid option for someone looking to try their hand at sous vide.

One other issue, albeit minor, is the fixed location of the clamp on the device. It’s located on the bottom half of the Nano, which causes the circulator to sit higher up on the pot. You can adjust it to open and close, but it doesn’t adjust up and down the length of the device. This means that when you have a taller pot, the circulator doesn’t reach all the way to the bottom. You must fill the water level higher to ensure you reach the minimum fill line on the device.

The Anova Nano comes with a two-year limited warranty.

We were impressed with the Nano and the five-star meals it created. The Nano’s only downsides are its smaller clamp and the lack of Wi-Fi. However, these issues are a small price to pay for the quality, performance, affordability, and versatility the Anova Nano offers.

The Nano is a solid option for someone looking to try their hand at sous vide. It’s simple to use, yet it offers flexibility. You don’t have to use a phone or tablet to control it, but you can if you want to. You can use the recipes on the app or use your own. It’s straight-forward, durable, and reliable. There are few options on the market at this price range that offer these benefits while also providing the brand recognition Anova provides in the sous vide world.

The Anova Nano is also a good option for those on the lookout for a second sous vide machine, considering its small and low maintenance. However, if you want a machine that has an adjustable clamp and a Wi-fi connection, you may prefer the Anova Wi-fi. You can check out our full review of that device for more information.

This product is exceptionally well made, and it should last for several years with proper care. The Anova app supports other Anova cookers in addition to the Nano, so the company should continue to support and update the app as they develop new products in the coming years.