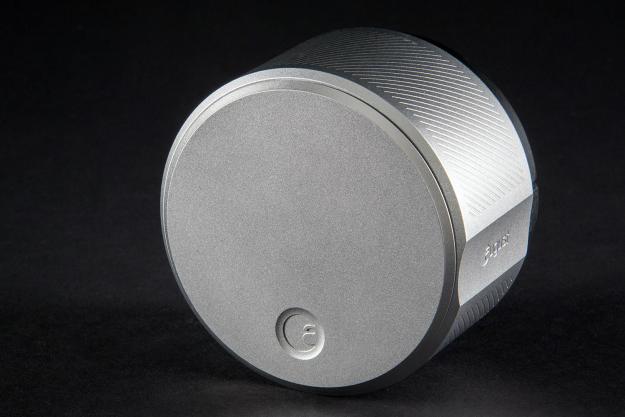 “It isn't completely flawless, but Yves Behar's August Smart Lock is about as close to perfect as they come. The bar has been raised.”

From Yale to Kwikset, the companies used to keeping your most valuable possessions safely under lock and key are ditching the key and replacing it with your phone.

But one of the most-anticipated locks doesn’t come from a home-security company at all: the August Smart Lock. Created by superstar designer Yves Behar, who has worked on projects for clients from Puma to MINI, the August promises a slew of advanced features and functionality, including a design that can easily be retrofitted on a traditional deadbolt in minutes.

Does it make good on that promise? We locked down our personal fort with one to find out.

Most smart locks aren’t all that difficult to set up, but even in comparison to some of the best ones we’ve tried, the August has the simplest install process we’ve ever encountered. Rather than replacing your existing deadbolt, the lock replaces just the inside half of it. This means that you don’t have to take out the bolt or remove the metal plates on your door frame, which makes the process much less of a pain. In most cases, you only need a single screwdriver to get the job done.

Once you’ve got it on your door, the next step is to pair the device with your smartphone and connect it to your network. Once again, a healthy dose of good design makes doing so a breeze. Your tech-challenged grandmother could install this lock in under 20 minutes.

The August is a shining example of a great user experience — but we must admit that for all its excellent features, we’re not particularly fond of the lock’s aesthetics. Granted, your deadbolt’s thumb lock probably wasn’t much of a looker to begin with, but the hockey-puck-shaped August is considerably larger than the simple lever it replaces. It stands out a bit, and probably won’t blend in with the rest of your door particularly well.

If you can get past the August’s somewhat bulky appearance, there’s a lot to love.

That’s about all we’ve got for the negatives column, though. If you can get past the August’s somewhat bulky appearance, there’s a lot to love.

The August’s Everlock and Auto-Unlock features, both of which are currently in beta, basically mean you never need to think about locking your door again. Everlock allows the deadbolt to sense when you’ve closed the door behind you, so the lock will automatically activate when you leave. The Auto-Unlock feature, on the other hand, will sense when you’re approaching the door and unlock August before you reach for the knob. These features make coming and going completely seamless — you don’t have to whip out your phone or keys to lock and unlock.

The lock’s accompanying smartphone app is also extremely polished. In addition to a fantastic user interface, August also gives users unlimited e-key distribution. You can give out as many as you want, which is something that other smart makers don’t offer (we’re looking at you, Kwikset). August even goes the extra mile here and gives you the ability to set custom parameters for each e-key you create, so you can choose whether to grant someone permanent, temporary, or schedule-based access to your house. Keys can be revoked at any time, and changing settings only takes a few taps if you ever feel like making adjustments.

Aside from the stellar smartphone app and well-executed lock/unlock features, August sports a handful of little design elements that are like icing on an already delicious cake. Little lights and sounds provide helpful auditory and visual cues while you use it. Battery power and Bluetooth Low Energy render it impervious to power outages and network failures. And let’s not forget that if the August ever dies (which it shouldn’t; the app will alert you when the batteries are getting low), the lock’s design doesn’t prevent you from using your normal key to gain entry.

Simply put, the August lives up to all the hype. The company made some big promises prior to launch, and they delivered on all of them. This lock works like a dream, and it never faltered once during our testing period.

Like a fine wine, the August will only get better with age.

That said, we must admit that some of the key features still need to be ironed out a bit. The August will lock behind you 30 seconds after you leave, but the Auto-Unlock feature will only activate if you travel outside of a certain range and then come back inside of it. We didn’t experience any issues with this personally, but it’s easy to see how this might be problematic in certain situations — particularly for city dwellers who might leave home, but then inadvertently unlock their door just by returning to a nearby location.

Since Auto-Unlock is still in beta though, this wrinkle will likely get smoothed out in the next software update. August has addressed the issue, and is currently gathering data on how people use the feature so that it can make adjustments. In the future, it’s very likely that the lock will have customizable distance settings so that users can adjust the August’s auto-unlock range to suit their needs.

If you’re interested in getting a smart lock, the August should most definitely be a contender. At $250, it’s slightly more expensive than most currently-available Bluetooth locks, but that extra dough gets you a very polished and well-executed product. The August is, without a doubt, the best smart lock on the market right now.

Installation is a breeze, the auto-lock and unlock features make it effortless to use, and the accompanying smartphone app is superb. We’re having trouble finding any downsides here.

We would’ve appreciated the ability to lock and unlock the August remotely, but the lock’s robust feature set makes it unnecessary in most situations. The EverLock function ensures that your door will always be locked when you’re away, and if you should ever need to let somebody in while you’re out, you’ve got an unlimited supply of e-keys to give away.

And the lock is only going to improve. Upcoming software updates will likely smooth out the aforementioned Auto-Unlock issue, and integrations with other smart home devices are already in the works. Like a fine wine, the August will only get better with age.

Topics
Anker finally admits to Eufy security camera issues
Samsung SmartThings gets Matter support on iOS
Best Amazon Alexa accessories: lights, plugs, thermostats, cameras, and more
The best Google Assistant-compatible devices
Best Smart Plugs: What is a smart plug, and which do I need?
The best outdoor smart plugs for 2023
This Shark cordless vacuum is under $150 — who needs Dyson?
Apple HomePod vs. Apple HomePod 2023
Apple HomePod Mini vs. Apple HomePod
The best robotic lawn mowers for 2023
Blink Wired Floodlight Camera offers heaps of features and an affordable price tag
The best video doorbells for 2023
How to fix an orange flashing light on the HomePod mini