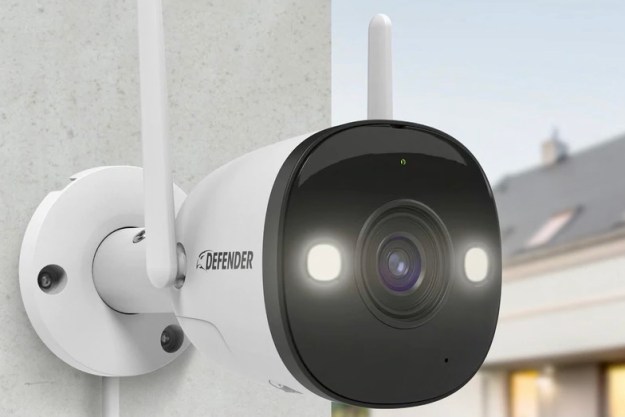 “Combining impressive resolution with an intuitive and robust app, the Defender Guard Pro 2K is a feature-laden smart security camera for a great price.”

Smart security cameras are a dime a dozen these days. With nearly every smart home brand offering some kind of surveillance peripheral, it’s becoming increasingly difficult to choose a device. Fortunately, the most impressive hardware always rises to the top, and we were lucky enough to get our hands on a camera that checked all the boxes when it came to performance, durability, and features.

From a design standpoint, the Defender Guard Pro delivered a solid first impression.

Holding it in your hand, the camera doesn’t feel overly heavy, but you can also tell that there’s nothing cheap at play. The plastic outer shell feels industrial and tough, while the pivoting arm was easy to adjust but sets firmly in place once you’ve chosen its resting position.

In addition to the camera, the box includes all the mounting hardware, a 10-foot power cable, a 25-foot power cable extension, a window warning sticker, a drilling template, user manuals, and waterproof shielding for an Ethernet cable.

Seeing as the male-to-female bridge between the power cable and the extension isn’t waterproofed (the user guide explicitly states so), it would have been nice to see some kind of covering for the power connections, too.

You’ll also want to make sure you’ve got an electrical outlet to plug the camera into because neither the Guard Pro nor the standard Guard is battery powered.

Getting the Defender Guard Pro up and running is a relatively straightforward process, although we did run into some initial glitches (more on that in a moment).

With the lens set to its widest field of view, color and contrast are excellent, and the level of detail is out of this world.

The first thing you’ll want to do is install the Defender Guard app (for iOS and Android devices) on your phone or tablet. When you launch the app, you’ll be prompted to create a Defender account if you don’t have one already. Two-factor authentication will have you diving into your email inbox to pull up a six-digit code to confirm your Defender registration.

Once you create an account, you’ll want to launch the Defender app and select the Add devices plus-sign icon at the top-right corner. You’ll find the option to activate your Defender Guard Pro through the device’s QR code (recommended) or by manually inputting the camera into the app.

Images and video look incredible, the app is sleek and responsive, and there are plenty of customization options available to ensure you’re getting smart security exactly the way you want it.

Before getting into the next step, make sure your Defender Guard Pro is plugged in and has power. After scanning the QR code, you’ll be prompted to connect your phone to the Guard Pro’s temporary hotspot. Once paired, join your 2.4GHz Wi-Fi network (the Guard Pro doesn’t support 5GHz bands). And here is where we ran into several snags.

It took several attempts to connect our Guard Pro to our Wi-Fi network. After closing and re-launching the app and activation process, we finally had to unplug and reconnect both our camera and router. Eventually, the Guard Pro successfully joined the network and didn’t come unpaired.

Considering the Guard Pro is equipped with dual Wi-Fi receptors, and our router wasn’t even 15 feet away during setup, this initial bit of network trouble is a little concerning. As mentioned, the Guard Pro never fell off the network once it successfully joined, and all device and app commands were smooth and responsive, too.

In terms of resolution though, both the Guard and Guard Pro max out at 2560 x 1440p, or what the company refers to as 2K ClearVu. We cover image quality in the next section but suffice it to say that the Guard Pro did not cease to amaze us — especially when it came to full-color night mode (IR-only for the standard Guard camera).

The Guard Pro allows for two-way talk between the device owner and whoever is standing in the camera’s field of view (no two-way talkback on the standard Guard). There’s also an option for dedicated audio recording and two great deterrence features you won’t find on the regular Guard — a motion-triggered spotlight and a siren.

On the motion end of things, the Guard Pro also features Smart Human Detection, which uses an algorithm to ensure the motion sensors are only triggered by human beings, ignoring things like animals and moving vehicles.

Uncommon for smart security brands, both the Defender Guard Pro and standard Guard come with a pre-installed microSD card for local storage. The Guard Pro comes with a 32GB card, with the camera maxing out at 256GB, while the standard Guard is equipped with a 16GB card and maxes out at 128GB. Of course, you can always opt for Defender’s bank-encrypted cloud storage, which is typically the option we see most smart security brands pushing. So, it was a nice change to start recording locally for free.

The Guard Pro also sports dual network antennas for picking up 2.4GHz Wi-Fi networks (no option to connect to a 5GHz band with either Guard camera), whereas the standard Guard only features one antenna. If going wireless may be an issue, both cameras also feature an Ethernet port for hard-wiring to your network.

In terms of durability, both Guard cameras are IP67-rated, which keeps the hardware safe from dirt, dust, and precipitation. Note: None of the electrical wiring is waterproof, so you’ll need to purchase the proper wiring insulation separately.

In terms of overall image quality, the Defender Guard Pro is pretty astonishing. Supporting both standard and high-definition live views and recordings, it’s Defender’s 2K ClearVu optics (2560 x 1440p) that truly stand out. Here’s a screengrab from one of our daytime live views.

Set the lens set to its widest field of view and you’ll find that color and contrast are excellent, and the level of detail is out of this world. While the resolution inevitably degraded when we pushed the 16x digital zoom to the max, we really didn’t lose much in terms of color and exposure.

Full-color night vision is also a feature you typically don’t see at this price point. That’s especially true for the type of quality you’ll see with the Defender Guard Pro. Here’s a screengrab from our test unit’s live view during the late evening hours.

With resolution maxed out, nighttime footage is sharp and well-balanced in terms of color and exposure, though there is just a little bit of overexposure from the neighboring building’s powerful LED floodlights.

Our recommendation: If you’ve got the network bandwidth to support the maxed out 2K resolution, use it. It provides some of the strongest footage we’ve seen from a web-connected security camera.

The Defender Guard app (for iOS and Android devices) offers a clean dashboard of intelligent and responsive features and customizations. Launching the app places you on the home tab where you’ll see live-view thumbnails from all of the Defender cameras on your network. Selecting one of the thumbnails takes you to a real-time vantage from whatever camera you choose and a dashboard of commands at the bottom of the screen (when your phone or tablet is in its vertical orientation).

Some useful quick commands include Snapshot and Record for capturing a still image or video of whatever your camera is looking at, Speak for initiating a two-way talk exchange, and Siren for manually sounding the Guard Pro’s alarm (only do so in the case of an actual emergency — it’s loud!).

You’ll also see an option called View history record. Select this option to view your Guard Pro’s log of motion-triggered recordings, as well as any manual stills and recordings you’ve opted to take. The event log serves as storage for both local and cloud-based images and recordings, sorted by calendar date, with timestamps displayed at the bottom of each thumbnail. Select a thumbnail to navigate to a new page with the actual clip and play/pause commands.

We also appreciate the many adjustable preferences and other settings that the app offers. On the home page, select the Two dots icon at the top-right of your Guard Pro’s live-view thumbnail to pull up a centered sub-menu. Choosing Device details sends you to the Guard Pro’s bevy of settings: Customize how and when to receive notifications, the motion sensor’s overall sensitivity, and the type of tone and volume the alarm uses.

You’ll also see a Storage settings tab at the bottom of this dashboard that displays how much space is left on your micro SD card. Select this readout to go to a screen where you can also format the card if it’s starting to get full (you can also manually delete images and recordings from the event log).

The Defender Guard Pro 2K Wi-Fi normally retails for $126, but you can sometimes catch it on Amazon for $99. While the Guard Pro comes with a one-year limited warranty out of the box, you can also purchase a two- or three-year extended warranty through Defender’s website.

Aside from our initial network connectivity struggles, and the lack of weatherproofing materials for the camera’s power connections, we think the Defender Guard Pro 2K Wi-Fi is an excellent standalone security camera, especially for the price.

Quality-wise, we can’t stop singing the praises of the Guard Pro. Images and video look incredible, the app is sleek and responsive, and there are plenty of customization options available to ensure you’re getting smart security exactly the way you want it.

How long should it last?

Based on the fact that you won’t have to worry about a battery, and that Defender allows you to purchase up to three years of warranty coverage, we’re betting the Defender Guard Pro will last at least five years.

While $126 is a pretty solid price for a Wi-Fi camera, the standard Defender Guard 2K sells for only $40 but has fewer overall features when compared to the Guard Pro.

If you’d rather jump brands in favor of a battery-powered security camera, the Google Nest Cam (battery) and Blink Outdoor Cam are both solid options.

Absolutely. Some of the best-in-class image quality and a clean, intuitive app make this a security cam worth buying.