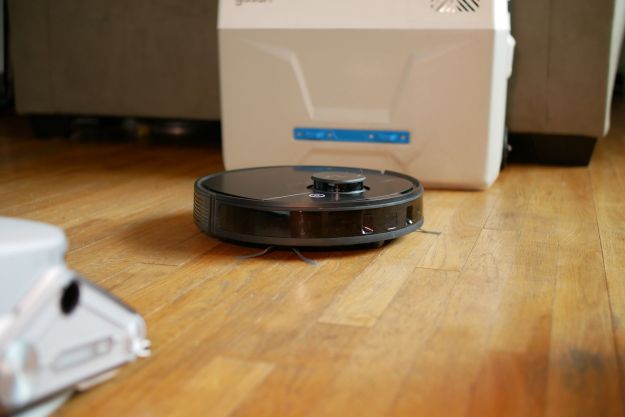 “The Deebot N8 Pro+ will let you spend less time babysitting and more time concentrating on other matters besides vacuuming.”

If you haven’t looked into the robot vacuum space for quite some time, you may notice one particular trend that’s been happening over the course of the last year: Self-emptying bots that carry out the task without any interaction from us humans. Sure, you’ll still need to empty out the bag at some point when it’s full, but this iterative feature makes them more autonomous.

Most major brands are offering some kind of self-emptying robot vacuum, including Ecovacs with its latest model, the Deebot Ozmo N8 Pro+. You may ask what’s so special about this one that we haven’t seen done before, but having the convenience of a self-emptying vac is only one part of the larger equation. Can it also intelligently clean well without being hindered by obstacles? Here’s what I found out.

One look at the Deebot Ozmo N8 Pro+ and there’s no denying that it’s designed just like any other robot vacuum I’ve seen. Even though the aesthetics are as cookie-cutter as they come, the only distinguishable aspect here is its bluish paint job. However, it’s worth pointing out that it features dual side-sweeping brushes that help to funnel debris into its underside brush and operate at a slower speed to prevent small pieces of debris from being flung in all directions.

The Ozmo N8 Pro+ also has a mopping function that makes it stand out as a double-duty model. The microfiber pad, in particular, isn’t like the skimpy pad that other robot vacuums use — it actually has substance to make contact with the floor! Unfortunately, removing the mopping plate from the water reservoir isn’t as intuitive as I’d like because you really need to apply some force to it.

Lidar technology allows the Deebot N8 Pro+ to efficiently clean, reducing time and maximizing its cleaning schedule. From the start of the first cleaning, it managed to map out the various rooms in my apartment as it was actively vacuuming. With the second go-around, I could tell that it knew exactly what to do right from the onset because it would move in zigzag patterns in open spaces.

Corners are also handled very well, but it’s worth pointing out how it also is pretty gentle when cleaning around furniture and other obstacles it comes across while vacuuming. Similar to other vacs with lidar tech, there’s an option to set no-go zones or virtual walls to prevent the bot from entering certain spaces, which comes in handy if you have places you don’t want disturbed.

The Deebot N8 Pro+ uses laser-based 3D technology that Ecovacs refers to as TrueDetect, which gives it the vision to see what’s in front of it and figure out the best way to get around it. For the most part, it gets the job done, but it’s still not without its faults.

But I have to admit that the Deebot N8 Pro+ doesn’t get itself stuck as much as other robot vacuums. Sure, it may traverse under some furniture, like an entertainment center, but it does a good job of determining whether or not it has the clearance needed to get through.

Thanks to its dual side-sweeping brushes, the Deebot N8 Pro+ handles hard floors like a champ. Pet hair and other smaller pieces of debris are gobbled up with no issues at all, but it still can’t achieve the same level of deep clean I get from traditional upright vacuums when it comes to carpets and rugs. Its suction power increases when it senses carpet, but it only provides a superficial clean.

The addition of a mopping function adds tremendous value here.

Being a 2-in-1 combo, the addition of a mopping function adds tremendous value here. Even though it only relies on water to mop floors, my feet can tell how much cleaner my hardwood floors feel compared to when I just vacuum them. I also like how you can adjust how much water the Deebot N8 Pro+ dispenses while it’s cleaning through the app. For tougher stuck-on stains, though, it required several passes before they are completely removed. But you still can’t beat having a bot that can mop and vacuum at the same time.

One often overlooked aspect of robot vacuums is how loud they sound while vacuuming. I was surprised by how quiet the Deebot N8 Pro+ runs, low enough that it never distracted me while I was working. Compared to other robot vacuums, like the iRobot Roomba i7+, it’s clearly quieter with its operation. The only time it’s loud and distracting is when it empties its contents into the self-empty charging base. It sounds like a jet engine, but that’s honestly how most of these sound.

Ecovacs undoubtedly has something good going on with the $700 Deebot N8 Pro+. It’s a reliable bot that cleans well, does double-duty as a mop, and even empties itself out on its own. All of these factors definitely add incredible value — especially when it’s able to handle most obstacles without much intervention.

The Samsung Jet Bot AI+ would be the only other superior robot vacuum to consider. It offers exceptional obstacle avoidance, features a self-emptying bin, and even has a neat security camera patrol mode that can monitor for movement. However, you’ll pay substantially more for it.

The only other model that matches the Deebot N8 Pro+ in terms of price and performance is the iRobot Roomba j7+, which is faster in terms of cleaning performance and handles obstacles just as well.

Proper maintenance will extend the life of the Deebot N8 Pro+, so it’s important to keep its brushes free of tangles and clean the dust that accumulates over its sensors. There’s a 1one-year limited warranty that comes included with the purchase and covers defects.

Yes. Why pay for two different robots when you can get a single one that can vacuum and mop, empty itself out, and navigate confidently around your home without being tripped up too often.