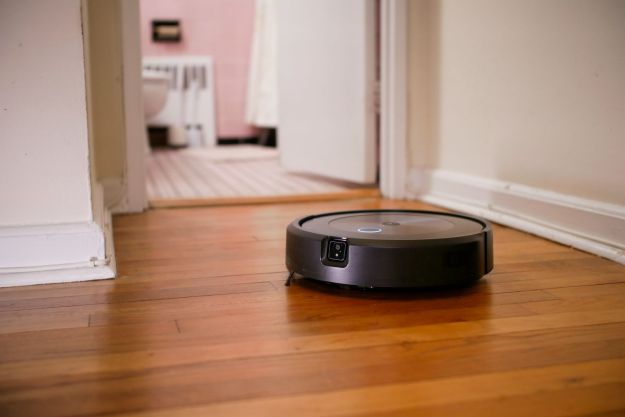 Experience goes a long way. That’s especially true in the world of robot vacuums, where iterative improvements in the tech over the years have yielded smarter, more efficient bots that clean faster. Gone are the days of worrying about robot vacuums falling down stairs or aimlessly cleaning in one spot. Today’s robot vacuums are better than that — but there’s still one major thing tripping them up.

Wires, cables, and other minor clutter around the home can still trip up the best robot vacuums out there. Being a pioneer in the space, iRobot is looking to tackle this pervasive problem with its Roomba j7+. When it comes to experience, no one has more of it than iRobot. The Roomba j7+ not only features a self-emptying base, but it’s equipped with a camera to help it to better avoid obstacles. While there’s a lot of talk about how it’s capable of avoiding pesky wires on the floor, seeing is believing. The days of precleaning may be over if it indeed can do this flawlessly!

Not surprisingly, the setup of the iRobot Roomba j7+ was effortless. That’s because everything was already put together inside of the packaging, so all that was needed was to remove the self-emptying base, connect the charging cable, and then dock the robot vacuum. Subtle additions to the self-emptying base are worth mentioning, like how it has a substantially lower profile than any other self-emptying bins I’ve seen. There’s even a small nook inside of the base to store an extra bag, filter, and side brush. I appreciate that, since they typically are stored elsewhere and quickly forgotten.

Once everything was unpacked and connected, all that was left to do was to fire up the iRobot app on my phone to guide me to connect it to my home’s Wi-Fi network. Since I previously used the Roomba i3+, I thought it would’ve at least copied over the map of my apartment, but it didn’t. Instead, the Roomba j7+ used the initial run to vacuum and actively map out my entire apartment. I had to let it run a couple more times before it was able to realize there was an accessible path to the bedroom.

What I like about iRobot’s app is that it’s intuitive and simple. Once a map of my apartment was generated, I’m able to go into the app to label the different rooms, add dividers to distinguish one room from another, and set “keep out” zones to prevent the Roomba j7+ from cleaning there. The latter ability comes in handy if you have areas you don’t want disturbed by the bot, like the location of pet bowls. Being able to customize the map like this alleviates those annoying instances when a robot vacuum just rolls through an area and everything in its path.

You can also set the Roomba j7+ on a schedule to automatically clean on its own. I would still recommend adult supervision because you just never know what can happen — more so if you have pets living at home. You don’t want to come home to find your cat’s tail got snagged by the robot vacuum when you weren’t there.

With the help of its front-facing camera and Genius 3.0 Home Intelligence tech, the Roomba j7+ is better equipped to detect obstacles and avoid them. I have to admit, it does great with avoiding cluttered charging cables near outlets and power strips, but it’s not infallible. There were two occasions in particular when it failed to avoid obstacles:One was a paper bag left on the floor, the other was a stringed cat toy. I will say that when I placed a charging cable in its path, it paused for a moment to assess it, then went around it to continue cleaning.

While it’s not perfect, it should be noted that the Roomba j7+ is trained at the moment to recognize cords, cables, headphones, and pet waste. Other clutter, such as shoes and socks, will eventually be added through a software update to better enhance its obstacle avoidance. Add to that, constant training and reviews will help the robot to make smarter decisions as it’s cleaning — so I’m confident that it’ll be better over time.

When it’s done cleaning, you can go back to the cleaning history to assess some of the obstacles it came across. While it wasn’t perfect in avoiding everything, I suspect that over time it’ll be better because reviewing the obstacles in the app will better train its vision. At the moment, though, I’d put the Samsung Jet Bot AI+ just slightly ahead of iRobot’s champ when it comes to detection and avoidance.

If there’s one thing you can count on with iRobot, it’s that its robot vacuums offer a better than average cleaning performance. With its side-sweeping and underside brushes, it pulls in dirt and debris scattered on my hardwood floors. Cat litter pieces aren’t flung in all directions because the side-sweeping brush rotates at a gentle speed, while its three-stage cleaning system and 10x power-lifting suction tech ensure all debris is captured.

It does great with avoiding cluttered charging cables near outlets and power strips.

The Roomba j7+ is also an efficient bot that doesn’t waste time figuring out a game plan to clean up rooms. It works efficiently and effectively by navigating in traditional zigzag patterns. Corners and edges are handled nicely, too, but I find that it can be just a tad bit aggressive with bumping into furniture.

Despite being a solid cleaner of hard floors, the Roomba j7+ falters with carpets. Superficial stuff, such as pet hair and other crumbs, are easily sucked in by its multisurface rubber brush, but I don’t feel confident about its deep-cleaning performance on carpet. It just doesn’t achieve the same deep clean feel my bare feet experiences on carpet cleaned by cordless vacuums.

Since my apartment is roughly over 1,000 square feet, there hasn’t been a time when any robot vacuums I’ve tested ran out of battery. The Roomba j7+ cleaned straight for over 40 minutes without any low battery alert. If the battery were to run low, it would automatically go back to the base to recharge.

Once there, it will also eject the contents of its dustbin into the self-empty base. That’s when it roars like a jet airplane because it needs the suction power to remove all of the contents. You could say it’s deafening, so you’ll want to keep that in mind. With the robot vacuum itself, it’s moderately loud while cleaning, so if you’re concentrating on something, you’ll want to run it at another time.

Even though it’s not the revolutionary robot vacuum I was expecting, the iRobot Roomba j7+ is an iterative model that’s priced appropriately in between the Roomba i3+ and s9+ at $850. It’s an intelligent, efficient, and feature-filled robot vacuum that offers a well-rounded cleaning performance made better by its smarter avoidance and self-emptying system.

The Samsung Jet Bot AI+ is the only other robot vacuum that exceeds the performance of iRobot’s offering. In addition to superior avoidance detection, it’s a remarkable, revolutionary robot vacuum because it doubles as a roving security camera to patrol the home when you’re not there.

Alternatively, there’s the Roborock S7 and its self-emptying base. It delivers a solid clean as well, made better by the fact that it features a mop function to really give hard floors that squeaky-clean feel.

Constructed from various tough plastic materials, the iRobot Roomba j7+ still feels like a solid, well-made bot. Of course, it requires some maintenance to keep it in tip-top shape — like removing tangles around its side-sweeping brush and cleaning off its sensors. There’s a one-year limited warranty that covers it against defects.

Yes, especially because it specializes in avoiding those pesky wires. Even though it doesn’t entirely eliminate the need to preclean before it’s set off to vacuum, you’ll worry less about having to constantly watch over it during its entire cleaning routine.