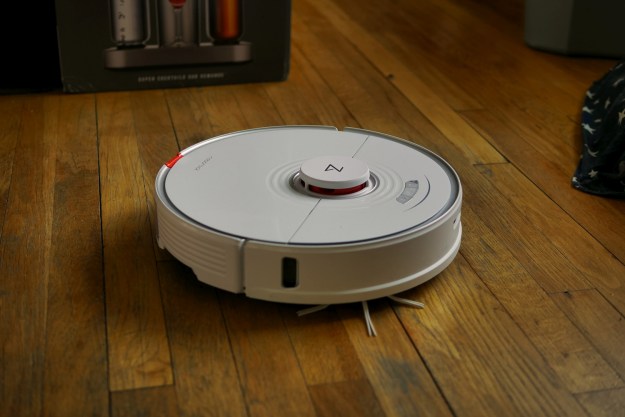 “The ability to vibrate at up to 3,000 times per minute means superficial stains are gone faster.”

Roborock’s had an amazing ride the last couple of years. Once an unknown player in the robot vacuum space, the company finds itself in contention against some of the heavyweights, like iRobot, Shark, and Ecovacs, thanks in part to its diverse and excellent performing models. Even more impressive is how the company rocketed into contention among the heavyweights in such a short span.

Its latest model, the Roborock S7, has all the same basic ingredients that made its previous bots such a success, like being a vacuum and mop combo for one, but its distinguishing feature over the competition is the new sonic vibration technology it employs with mopping. Tough stuck on stains may soon be a thing of the past if this new implementation actually works — not to mention an auto-empty dock that’s planned for release later this year.

A familiar bot that cleans efficiently

The Roborock S7 doesn’t look too different from its siblings. There are a few subtle changes, such “breathing” LED lights that fade in and out, a more compact water container, and most importantly, a new all-rubber underside brush. Aesthetically, it doesn’t deviate from past designs we’ve seen from Roborock’s bots. The same distinctive characteristics are present here, like its protruding lidar sensor array, rubberized side-sweeping brush, and all-plastic construction.

In terms of cleaning, the Roborock S7 efficiently cleans thanks to its lidar-based navigation. It maps out rooms accurately and does a decent job at avoiding most obstacles. The occasional cable wire on the floor can trip it up, but it’s able to navigate challenging rooms by trying to clean in straight lines. Its side-sweeping brush does a good job of funneling debris toward the underside’s all-rubber brush. After a couple of cleaning sessions, however, I found hair bunched up and tangled in the middle of the brush.

Despite this, it manages to suck up some of the annoying pieces of litter throughout my apartment. Carpets are handled decently, as it picks up most of the superficial stuff with its 2500Pa suction power, but it doesn’t come close to scooping up those tough, embedded pieces that my cordless vacuum is able to gather.

The marquee feature of the Roborock S7 is its new sonic-mopping technology. All of Roborock’s past vacuums employ the pulling method of mopping. Frankly, I’ve been satisfied with this, but it doesn’t necessarily disinfect surfaces — something that very few bots can do.

It requires fewer passes to remove stains on solid surfaces.

The S7’s sonic-mopping technology comes with a new brushing attachment and a more substantial-feeling microfiber mopping pad. What happens here is that the mopping pad vibrates at the rate of up to 3,000 times per minute. It’s different, yet effective because the result is that it requires fewer passes to remove stains on solid surfaces — like tiny drops of dried coffee on tiles. Now, it doesn’t remove those tough ,deep stains, like those streak marks that sneakers can leave on tiles, that a good old mop can accomplish with enough pressure and scrubbing. But hey, at least it mops floors just as efficiently as it vacuums. Time is money, so I’m impressed by how quickly it gets the job done, although I’d still like to see a way for it to disinfect surfaces.

Even better is that the S7 will retract the mopping pad when it goes over humps, dividers, and carpet, then bring it back down to apply the pressure it needs for its sonic mopping. Other 2-in-1 combos require you to remove the mopping pad in order for them to vacuum carpets.

You barely hear it cleaning

With two people working from home and constantly on conference calls throughout the day, I’m very impressed by how quiet the Roborock S7 cleans. It’s noisiest when it goes on carpets, but it’s almost inconspicuous as it cleans hardwood floors and tiles. There’s a slight hum when it mops, but it’s low enough to drown out with some music playing in the background.

Beyond that, the Roborock S7 is a competent robot vacuum because it comes packed with all the modern conveniences I crave. They include support for voice assistants like Google Assistant and Amazon Alexa, the ability to set up virtual boundaries/no-go areas, and the capability to clean specific rooms. All of this makes the Roborock S7 a well-rounded bot that can clean quietly and effectively while you’re home.

There’s nothing that the Roborock S7 can’t handle. It cleans well, doesn’t waste time, and its new mopping system is a small but effective step forward. It’s not a game changer in the world of mopping, but the change simply makes it more efficient at the process.

The only downside to this otherwise spot-on robot vacuum is its price. At $649, it’s near the top of Roborock’s lineup — only surpassed by the camera-toting Roborock S6 MaxV. It’s a tough sell because I prefer the added functionality of the S6 MaxV’s integrated camera for intelligent obstacle avoidance and livestreaming.

Even with the all-plastic construction, there’s some serious heft with the S7. The only concern I have is the plastic piece on the mopping pad attachment that allows it to vibrate back and forth. It seems on the fragile side, especially when removing the pad off the Velcro attachments. Still, there’s a 1-year limited warranty.

Yes, the aforementioned Roborock S6 MaxV isn’t too far off in price — making a compelling option because of the advantages of its integrated camera. It cleans just as effectively whether vacuuming and mopping.

Yes, only because some people aren’t comfortable yet with the idea of a roving vacuum with a camera on it. The Roborock S7 is essentially the S6 MaxV without the camera, but with an improved mopping system.