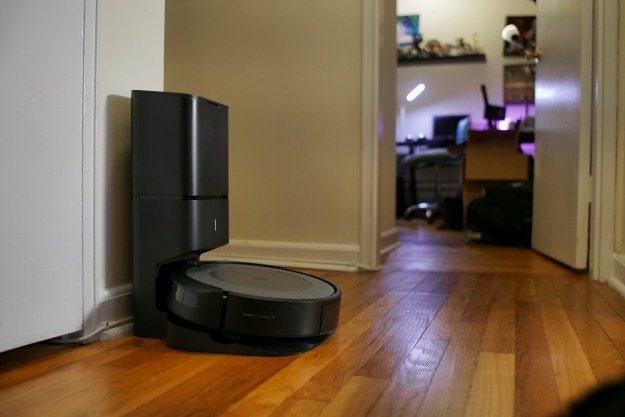 “Cleaning is done efficiently and without intervention thanks to its auto dirt disposal system.”

You don’t need to have ever owned or used a Roomba to know the reputation that precedes the robot vacuum maker. Much like Apple in the world of smartphones and DJI with aerial drones, iRobot has an immense, established presence that provides a sense of confidence among consumers.

Its latest robot vacuum, the iRobot Roomba i3 Plus, borrows a useful feature from its premium siblings — while bearing a cost that’s substantially lower. This combination feels like a direct response to the various units that have come to market in the last year that have offered premium features at midrange prices. Shark’s IQ Robot comes to mind as being one of them, featuring the convenience of a self-emptying system, but iRobot’s offering is making an equally compelling case for itself.

Smart cleaning without the advanced sensors

I’ve never owned or used a Roomba before, but I’m familiar with the various technologies implemented by today’s sophisticated robot vacuums that make them efficient cleaners. LiDAR, laser navigation, and cameras have all been shown effective in making today’s robot vacuums efficient cleaners — besting models that still employ the bump and move routine of navigating around. You get none of those fancy features with the Roomba i3 Plus, but even so, I was shocked by its performance.

Instead, it relies on floor tracking sensors on its underside to navigate. This effectively allows it to track its movement around rooms, so it’s not just going around cleaning in random formations. In many instances when there are clear, wide open spaces, it cleans in straight lines. Furthermore, I’m impressed that it’s able to handle clutter with ease. Even with some charging wires on the floor and shoes lying around, the Roomba i3 Plus didn’t need fancy sensors to navigate around them.

All of this brings me to its incredible cleaning performance, which sweetens its value as an efficient cleaner. The dual multi-surface rubber brushes do an excellent job of pulling in dirt and debris — without getting tangled up by pet hair and other long fibers. While it only has a single edge-sweeping brush that helps it to funnel dirt, the strong suction helps to mitigate debris from spreading around as it’s being funneled. Corners and edges are handled nicely, even though it has the tendency to readjust its position.

I’m impressed that it’s able to handle clutter with ease.

Overall, for a robot vacuum that’s relying on floor sensors, the iRobot Roomba i3 Plus is a highly efficient and proficient cleaner that can tackle all of my cleaning needs.

Auto disposal robots are still few and far between, with even iRobot’s own offerings, the Roomba i7 Plus and s9 Plus, fetching for $800 and $1,100 respectively. They don’t come cheap, which is why the Shark IQ Robot’s sub-$600 price tag has been such an appeal for many. Thankfully, the Roomba i3 Plus receives the same convenience with the inclusion of the iRobot Clean Base Automatic Dirt Disposal — all for nearly the same cost as the Shark at under $600.

The convenience of setting the robot to clean on its own, then return back to base when it’s finished to empty itself, is a benefit that means one less thing on my to-do list. I actually don’t mind emptying the robot vacs myself, since that’s all I’ve experienced prior to this, but I totally comprehend its inclusion in making it more automated. However, it sounds like a jet engine going off at top speed — it’s that deafening — albeit, it’s for less than a minute. The disposal unit can hold up to 60 days’ worth of dirt and debris, but I wish that there was a more accurate way of knowing through the app. If you’re wondering, a 3-pack of the disposal bags costs $20.

In the event the robot vacuum’s dustbin is filled during cleaning, it’ll automatically stop and return to the base to dispose of it — and then return to where it left off to finish the cleaning. Again, it’s this sort of automation that lessens the need for any intervention on my par. Battery life is excellent, too, running an easy one hour straight of cleaning my apartment.

Even though I’m enamored by the Roomba i3 Plus’ efficient cleaning, it lacks a feature that I’ve come to rely on — and that’s setting up no-go zones in my apartment. With other bots, this is accomplished one of two ways: using magnetic strips to set these boundaries or placing them on a map through the app. Unfortunately, neither is an option for the Roomba i3 Plus. Quite simply, it’ll clean everywhere and anywhere the moment it starts.

If you have areas in the home that you don’t want disturbed by a robot vacuum, the ability to set up virtual boundaries/no-go zones is crucial. Additionally, the robot vacuum doesn’t have the ability to map out rooms. I guess I’ve been spoiled by how other vacuums are able to recognize and determine rooms, which is super helpful if you just want it to clean a specific room instead of everything. Despite this, there are options in the iRobot app to set schedules for when to clean — as well as connecting them to other devices and services. For example, you can set it up so that the Roomba i3 Plus will start a cleaning session when you’re not home.

The Roomba i3 Plus is a remarkable cleaner that makes me worry less about cleaning.

Call it a compromise, but its inability to accurately map out rooms and set virtual boundaries is exactly what differentiates this model from iRobot’s other premium robot vacuums.

This is my first time to become acquainted with an iRobot Roomba, and I was thoroughly impressed by how awesome it cleans — both in picking up debris from floors and carpets, in addition to its efficient way of cleaning. The idea of being even more independent and automated is made more pronounced by its auto dirt disposing system. For a mid-ranger, the Roomba i3 Plus is a remarkable cleaner that makes me worry much less about cleaning.

Interestingly enough, the design’s deliberate choice of tough matte plastic with a dark grey fabric top makes the Roomba i3 Plus less prone to looking dirty and dusty after each clean. I prefer it over the glossy glass tops I see in many other bots.

For the most part, the construction feels solid, but a little bit of maintenance will make this bot last longer. In particular, long pieces of hair can collect around the edge-sweeping brush, so cleaning that after each use helps out.

If something internally goes bad due to a defect, there’s a 1-year limited warranty that comes with the purchase.

Yes, if you’re willing to fork over the money. The older iRobot Roomba i7 Plus is the logical alternative, even though it’s a couple of years old now, and it features the same auto dirt disposal system — while benefiting from room mapping abilities that can help it to recognize rooms.

My personal all-around favorite recommendation is the Roborock S6 MaxV, partly because of its intelligent obstacle avoidance, built-in camera for security, and it can also mop floors. You’re paying more, but it’s a 2-in-1 combo that gets the job done. If not, there are several more bots to consider that covers the price range and features.

With its efficient cleaning and auto disposal system, you’ll rarely ever have to interact with the iRobot Roomba i3 Plus. It’s a capable robot that can handle the cleaning all on its own, so it’s definitely worth buying.

Looking for more? Check out this awesome collection of the best Black Friday Roomba deals we found, so that you can leverage the Black Friday discounts.