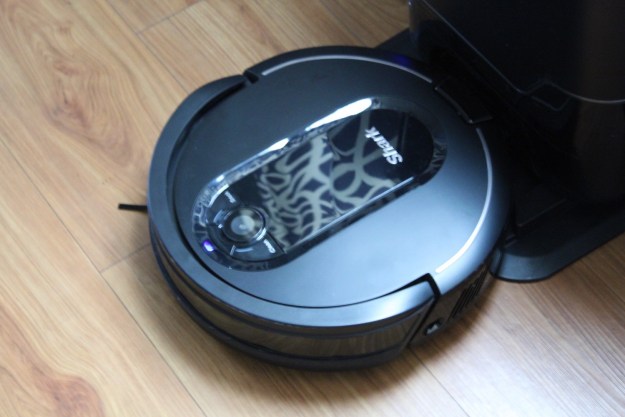 “The IQ Robot’s self-emptying capability combined with its ability to only clean certain areas make it possible for me to set 30 days of scheduling and have a truly automated cleaning experience.”

I’m too lazy to robot vacuum. Like really, time is precious.

I don’t feel like making sure the pet’s bowls are pushed away to the corner, moving the shoes out of the middle of the entryway, and moving my laptop cord and cellphone chargers so the robot doesn’t gobble them up. Most of all, I don’t feel like emptying the dustbin on a regular basis because it’s just another item for my to-do list. Time is money as they say. Recently, I was given the opportunity to review a new robot vacuum by Shark called the IQ Robot. What does the Shark IQ Robot have over the gazillion other robot vacuums on the market? Is it prettier? Smarter? Will it fold my laundry? What makes it so special?

Well, like the pricier Roomba i7 plus, the Shark IQ R101AE is an auto-emptying robot vacuum. It’s also supposed to have exceptional suction power, a self-cleaning brush roll, advanced mapping capabilities, and a relatively affordable price tag. Considering that features tend to add to the pricing, it’s comforting that Shark keeps it relatively obtainable.

Even with newer competition continually coming out like the Roborock S7, iRobot Roomba i3 Plus, and Trifo Lucy making their presence known, the Shark IQ R101AE is still one of the best robot vacuums on the market and most efficient, but you’ll want to keep an eye out for some amazing Cyber Monday robot vacuum deals to get a discount on it.

When I opened the box, I found the Shark IQ robot, which already had the self-cleaning brush roll, wheels, and main components installed. To complete the robot’s assembly, all I had to do was snap on the two front side brushes, which are single-prong. I also found the self-emptying base, which serves as the charging dock as well. Lastly, there’s an included mat in case I wanted to set up the IQ robot on a carpeted area. I didn’t use the mat since I set the unit up on a hard floor surface.

The setup process was very simple. It took less than five minutes. After I charged the robot fully, which took six hours to go through its first full battery charge, I installed the Shark Clean app and connected the device to Alexa for voice control.

Yes, it empties itself, and it’s pretty sweet

I can hear the dirt being sucked out of the robot each time the robot interacts with the docking station. The emptying station is bagless too, so I don’t have to worry about replacement bags or damage to the environment with plastic.

The self-emptying bagless technology makes it so I can leave the vacuum alone for about a month, and when it’s finally time to empty the dirt, I just lift up the bin and press a button to release the dust and debris into a trash can.

Past Shark robot vacuums, like the ION R85, didn’t exactly excel in mapping technology. The R85 has smart sensor navigation, which helps it avoid objects and get around the house, but it doesn’t have visual mapping.

The new Shark IQ Robot is way ahead of the ION R85 in this regard. It doesn’t repeatedly travel over areas where it’s already cleaned, and it creates a map of your home in the app, which allows you to select specific areas where you want the robot to clean. You can tell the robot to clean only the master bedroom or the living room for instance, and it knows exactly where to go.

This vacuum has amazing suction. The suction power is better than most upright units I’ve encountered. It left my floors completely free of dust, debris, and dog hair. What really impressed me about the IQ robot, however, was its ability to grab up large debris. We have a lot of trees on our property, so my family and I track in a lot of dried leaves. The robot picked up every last leaf, crumb, and food particle left on the floor from the day.

The IQ Robot comes with 8 feet of magnetic strips I can use to block off areas where I absolutely don’t want the robot to travel. I cut the magnetic strips into smaller pieces, and placed the strips in front of my dog’s crate, around her food area, and in front of an area where there are a lot of cords and charging cables. This way, I don’t have to move anything before I vacuum or clean up beforehand, which defeats the purpose of automated cleaning.

I can set the IQ robot to clean on a schedule. Typically, robot vacuum scheduling features are not all that useful because the user has to empty the dustbin and prepare the cleaning area between cleanings. The IQ Robot’s self-emptying capability combined with its ability to only clean certain areas makes it possible for me to set a schedule for 30 days and have a truly automated cleaning experience. The robot has a 90-minute battery life on a single charge, but if the robot runs out of battery juice or the dust bin fills up during cleaning, it returns to the station for more battery power or to empty itself, and then it resumes cleaning.

The robot talks too, letting me know if it’s experiencing any issues. If I can’t find the robot, there’s a “find my robot” feature in the app that will make the robot beep so I can locate the device if it gets stuck under a couch or in a closet. Also, because it’s compatible with Alexa and Google Home, I can also use voice commands to control the IQ robot.

The robot is a little loud

This vacuum makes a lot of noise. It’s louder during operation than any other robot vacuum I’ve used. It’s also extremely loud when it’s emptying the dirt from the robot into the self-emptying base. When it’s emptying, it kind of sounds like one of those vacuums at the car wash. It startled my dog the first few times, and now she looks at the robot every time it approaches the docking station waiting for it to make the loud noise.

For me, the loudness of the unit wasn’t too much of a problem, as I can just pause my Hulu show whenever the vacuum approaches. But for those who have young children or any home situation where they require a robot vacuum that operates quietly, this could be an issue.

A useful map of your home

When I first tested the IQ Robot, it was just coming onto the market and it had some issues with the mapping where it took quite a while to learn its surroundings. Since then, Shark has made improvements to the mapping, and I retested the unit since those improvements.

The unit had to vacuum my home for three days (three scheduled cleaning cycles) before it created a full map of my house. Once the map was ready, I could set the robot to only clean specific rooms.

The robot didn’t have any problem finding the dock while it was still learning my home, and it efficiently cleaned in an S-pattern, picking up debris from each room completely.  It cleaned edges, corners, area rugs, and under tables. It didn’t get stuck anywhere, nor did it have any problem navigating around chairs and tables.

The Shark IQ robot comes with a one-year limited warranty.

Practical and powerful, the Shark IQ robot solves most of the problems customers have with robot vacuums. There are a few drawbacks — especially the fact that the unit operates so loudly — but considering the IQ Robot is more affordable than other robots in its category, I am still pleased with the unit overall.

Are there any better alternatives?

The main competition to the IQ Robot is the iRobot Roomba i7 Plus, which is an excellent piece of machinery with stellar mapping capabilities and exceptional cleaning performance. The two major differences between the IQ Robot and the i7 Plus are the price and the fact that the IQ robot is bagless.

You can buy the IQ Robot for $600. We’ve seen it priced a bit lower throughout the year, so you may want to frequently check each week if there’s a discount available. Meanwhile, iRobot’s i7 Plus will cost you around $800. The i7 Plus is also self-emptying, but the emptying station contains disposable bags. The customer has to replace the bag after the dustbin is emptied 30 times. More recently, we’ve seen a few that leverage vision through the aid of artificial intelligence and cameras, to better navigate around objects and rooms. The Roborock S6 MaxV is one of them, which can also mop as well for $750.

With visual mapping and smart home compatibility, this robot is technologically right where it should be. Features like self-emptying and the ability to select specific cleaning areas take it up a notch, bringing it slightly ahead of the curve. The IQ Robot is well-built, but it does have somewhat of a plasticky feel. Other robots I’ve tested feel more solid, but the Shark IQ still feels like a quality unit.

There’s no reason to believe the companion app (Shark Clean) would discontinue support for the IQ Robot anytime soon.

Yes. If you don’t want to worry about vacuuming at all, this robot is a good investment.

Take a look at our roundup of the best robot vacuum deals for more options and exciting offers.