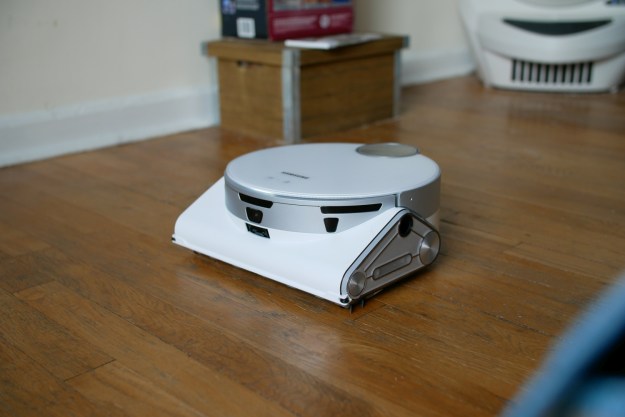 “If you can afford its hefty price, the Samsung Jet Bot AI+ is Samsung's best robot vacuum to date.”

I’ve never been satisfied by Samsung’s line of robot vacuums. They were at best average, but never outstanding enough to push the company into the same sphere as iRobot or even Roborock. However, that may change with the arrival of its latest robot vacuum for the home, the Samsung Jet Bot AI+.

One cursory look at the bot is enough to raise eyebrows, including mine, just based on its intimating design. Seriously, it looks like a mini tank on wheels instead of your traditional robot vacuum design. What makes the Jet Bot AI+ notable over other models is that it’s a self-emptying model and does double duty as a home security patrolling bot. A few models do this, but none have assured me yet that they can do it effectively.

One of the biggest caveats I’ve had with the company’s last-generation lineup, the PowerBot series, was that they didn’t do a great job at picking up debris from corners and edges. Even after a couple of cleanings, there were still pieces of cat litter scattered everywhere. Thankfully, that all changes with the Samsung Jet Bot AI+.

With the help of its onboard lidar sensors, it works quick and fast to map out rooms, then cleans them in an efficient manner with the typical S-shaped cleaning pattern. It does pretty well with hardwood floors, sucking up all the miniscule pieces of dirt, debris, and cat litter. I was actually quite impressed by this particular Samsung bot, given my past experience.

Instead of being equipped with an ordinary bristled underside brush, the Jet Bot AI+ features a soft roller-type brush that’s more effective on hard floors than carpets. Don’t get me wrong, the antistatic fibers don’t get all frizzled from overuse, but it lacks the pickup of an ordinary bristled brush when it comes to carpets. It’ll automatically adjust its suction power depending on the surface, with a noticeable increase when it moves onto carpets and rugs — but I still found some stuck-on pet hair clinging to the carpet.

Once it’s all done, it’ll automatically find its way back to its combination charging and self-emptying base. All the contents in its dustbin are discarded right into the bag inside of the self-emptying base. That’s less mess for me to clean up each time the bot cleans, but just know that replacement bags are $40 for a 5-pack.

Right from the start, it was noticeable that this Samsung robot vacuum was light-years smarter than previous models. Thanks to its combination of lidar sensors and camera, the Jet Bot AI+ exceeded my expectations when it came to avoiding obstacles and clutter — including some pesky wires that are notoriously difficult to avoid. While it still did snag one end of a blanket, I didn’t find it getting stuck in cramped spaces. It actually did a good job of navigating in cramped quarters, which is surprising because it’s quite a behemoth.

The Samsung SmartThings app will display the map of your home the first time the Jet Bot AI+ cleans, and it will then automatically categorize the rooms. It even managed to note large pieces of furniture on the map on its own, something I haven’t seen with other robot vacuums. The map can then be edited to include no-go zones, which is useful in making it more efficient with cleaning.

Patrolling routes when you’re not home

Without question, the neatest feature of the Samsung Jet Bot AI+ is its ability to act as a patrol when you’re not at home. Think of it as your own personal security guard that moves from room to room, watching out for any movement. While accessing the live feed of the video can be done easily through the Samsung SmartThings app, you’ll need to install the SmartThings Video add-on in order to view captured footage later on.

This is so far the best patrolling home robot I’ve checked out.

Now, I will argue that this is so far the best patrolling home robot I’ve checked out, but it still needs some work to be even more useful. The one complaint I have is that it can’t enter patrol mode automatically. I really would have liked to see a geofencing feature of some kind that would automatically arm the robot to patrol whenever I’m away from home, and subsequently turn off when I’m there. Instead, you can only set a schedule for now.

Despite this, it’s really amusing to see the Samsung Jet Bot AI+ leaving the base to patrol different rooms throughout my apartment. It’s not cleaning either while it’s moving around, so it’s a bit quieter and saves on battery. When it enters a room, it’ll eventually stay in one spot, but will rotate every now and then. When its camera detects movement, it’ll record the event and send a notification in the app. This is exactly the kind of home security that’s most needed because it doesn’t sit in just one spot like a typical security camera. However, there’s still room for improvement here because of its narrow field of view and its pretty basic motion detection.

The Samsung Jet Bot AI+ is the company’s best robot vacuum to date — there’s no arguing that. It’s also one of the most advanced robot vacuums on the market, offering premium features like a self-emptying system, intelligent obstacle avoidance, and home security.

The latter feature is especially notable because few bots actually do a good job of it, but the Jet Bot AI+ is the first that provides some level of confidence in terms of home security. It’s not outstanding, but the beginning of what’s to come as more robot vacuums become personal home security patrols on wheels. It’s Samsung’s best offering, but also a pricey one at $1,300.

The closest rival to this is the Roborock S6 MaxV, which also features a camera for better obstacle avoidance and security. While it doesn’t have as much of a comprehensive home security package, it does double as a mopper as well — something that the Jet Bot AI+ doesn’t offer. Plus, it’s also more obtainable at $850.

When it comes to cleaning performance, the iRobot Roomba i3+ does an amazing job of getting all corners of your home clean in an efficient manner. On top of that, it sports a self-emptying base and a far more attractive price of $600.

There are certainly a lot of components in play here with the Samsung Jet Bot AI+. Cleaning the robot, removing tangled pieces of hair from its wheels, and emptying the bag inside of the cleaning base will all help toward keeping it in optimal shape. There’s a one-year limited warranty that covers it from defects.

Yes. It’s a really pricey investment, but it has some merit given all the features it offers.

How to transfer data from your PS4 to PS5

Ralph Fiennes faces retribution in trailer for The Forgiven