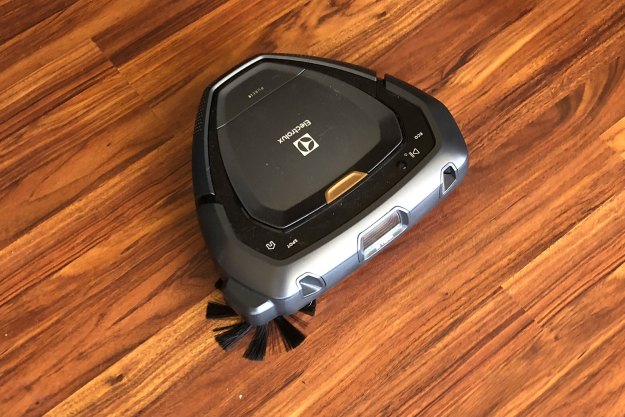 “The Electrolux Pure i9 robot vacuum cleans your floors spectacularly -- when it doesn’t get confused along the way.”

Vacuums are one thing, but robot vacuums are a different story. We were excited to try out the Electrolux Pure i9 ($899), because its manufacturer has been making vacuums for almost a century (albeit upright vacs rather than robovacs). When it comes to robot vacuums, we often find they’ll have good navigation but poor cleaning, or vice versa. Electrolux clearly put a lot of thought into both sides of the equation, but one came off better than the other.

Shaped like a somewhat lumpy triangle with rounded points, the Pure i9 look unique when compared to Roombas or Neato Botvacs. It’s about 3.35 inches tall, a pretty low profile, and about 12.8 inches in diameter. There’s a bumper on the front that lifts up a bit, presumably to help extract it from sticky situations. Up top there’s a screen that displays the time, battery status, and other warnings and indicators. There’s a bronze button for the 0.7-liter dust bin, which is easy to remove. It’s also easy to open and close, and the robot will warn you — both with a red light and voice reminder — if you try to run it without the bin in place. From the robot’s display you can hit play and pause, as well as activate the spot clean option. You can put it in eco mode, as well as send it back to its charging dock with the home button.

Underneath are two big wheels to help the Pure i9 maneuver over door jambs and four tiny little wheels for pivoting. There’s a single rotating brush for gathering up stray debris and sweeping it in the roller brush’s path. This twirly brush seems larger than a lot of other bots’, and our cat is obsessed with it. The roller is well-designed. Instead of being all hair-trapping bristles, which can become impossible to clean if your vacuum is sucking up lots of fur, it also has rubber fins. You’ll still need to take a pair of scissors to the thing if you have a shedding animal, but it’s much easier than trying to yank out hair from bristles that cling like Velcro.

Out of the box, the vac ran for about 15 minutes, and the fully charged running time isn’t much better: It tends to quit after about 40 minutes. In eco mode, it’s more like an hour, but compare that to the Hoover Rogue 970 we recently reviewed. That one runs for an hour in regular mode and 45 minutes in “beast mode.” The Pure i9 takes about three hours to fully recharge.

The twirly brush seems larger than other robot vacuums, and our cat is obsessed with it.

Because this is 2018, the Pure i9 has an app (Android and iOS). To connect your robot to your Wi-Fi, you flip it upside down, open the app, and scan the barcode or manually enter the number. We had to close out the app a couple of times to get it to work but haven’t had trouble connecting since. In the app, you can set a daily cleaning schedule for the Pure i9, or only have it run on Saturdays and Wednesdays, for example. You can also start cleaning from the app and look at the activity log. This log only shows the past eight jobs, unfortunately, but it does give you details like how long it cleaned and the area, in square feet, it covered. It also tells you whether it made it back to the charging station or got lost, though sometimes it claimed we canceled the cleaning when we didn’t.

Electrolux touts its “3D vision system,” which includes a camera that senses the shape and height of objects in its path. Instead of needing extra sensors around areas with lots of cords or in front of your pet’s water bowl, the Pure i9 should be able to figure out on its own not to go into these hotbeds of peril. Indeed, the robot didn’t throw itself against our cats’ food and water dishes, avoiding a mess of its own making. However, this navigation was a double-edged sword. Two days in a row, the robot gave up after just five minutes of cleaning. Although the docking station was pretty close to a wall and a bookshelf, it had lots of room to cover that it never reached. We moved the docking station to another spot, where we had more luck.

Because of this vision system, the Pure i9 spends a lot of time spinning around before it decides where to go. When we tested the spot-clean feature (which has the robot clean a 10-square-foot area twice), it spun around and avoided the pile of debris we left right in front of it until about two minutes in. That said, when it did get there, it did a great job on rugs and carpets, picking up about 95 percent of what we put down, including rice and cheerios.

On wood floors, the bot tended to fling some bits fairly far and wide but still got about 92 percent of the mess. It also handled pet hair well, getting a fair amount past the brush and into the dust bin. Though we let it run three full cleanings without emptying the dust bin, we never triggered the “empty the dust bin” suggestion. At 0.7 liters, it is a decent size and a bit bigger than the LG Hom-Bot’s, which is 0.6 liters.

Because it doesn’t have the “do not pass” beacons, one thing that is missing from the Pure i9, is the ability to exclude a room from cleaning. The Electrolux vacuum does just fine getting over door jams, so you’d have to close the door to ensure it didn’t make its way into a room with a floor covered in Legos, for example. However, in our week of testing, we found the robot didn’t actually go into any rooms where it had to go through a door. We couldn’t tell if that was part of the vision system or not. Or perhaps, with only 40 minutes of battery life, it didn’t want to wander too far from home. The robot wasn’t always successful at returning itself to its charging base. In any case, it never made all the way through our two-bedroom condo on a single charge.

The Electrolux Pure i9 comes with a one-year limited warranty.

With a hefty price tag and short battery life, the $899 Electrolux Pure i9 has some serious drawbacks. But it’s smart enough not to run into bowls full of water and has great cleaning power, so we want to forgive its somewhat quirky navigation.

The aforementioned LG Hom-Bot ($699) and Hoover Rogue 970 ($500) are both less expensive but are also taller, at 3.5 inches and 3.8 inches, respectively. Sure, that’s not much, but it could mean the difference between getting under your bookcase or not. The $900  Roomba 980 has Alexa capability, which the Electrolux is lacking at the moment. For a lower-priced but still app-enabled option, the Neato Botvac D7 Connected is $799.

The one-year warranty is very long, To keep it working, you’ll want to perform regular maintenance, like wiping off the robot and charger, cleaning the brush, and rinsing and drying the filter. This is true of any robot vacuum. Electrolux is new to the robot game, but it’s been making vacuums for almost 100 years.

If you can put up with some trial and error when it comes to finding the perfect starting point with the Electrolux Pure i9, you’ll get a great clean. However, its 40-minute battery life definitely won’t cover more than a one-bedroom apartment in a single sweep. You might want to pass on this one until battery life improves in newer models.

Topics
The best air purifiers for mold issues
How to give smart home gifts
Best smart lights for Google Home
9 ways Google Assistant can help with Thanksgiving
Cyber Monday deals drop this Dyson cordless vacuum to $350
The Roborock last-minute holiday sale will save you a fortune
This Keurig is under $50 for Cyber Monday, but it won’t last
Get the Amazon Echo Dot for $15 for Cyber Monday 2022
This Echelon smart rower is 50% off for Cyber Monday — get it now
It’s not quite KITT, but you can put Alexa in your car for $15 today
Amazon Echo Show 15 is $80 off with this Cyber Monday deal
How smart water management can protect against damage and save money
Best options for outdoor lighting at home