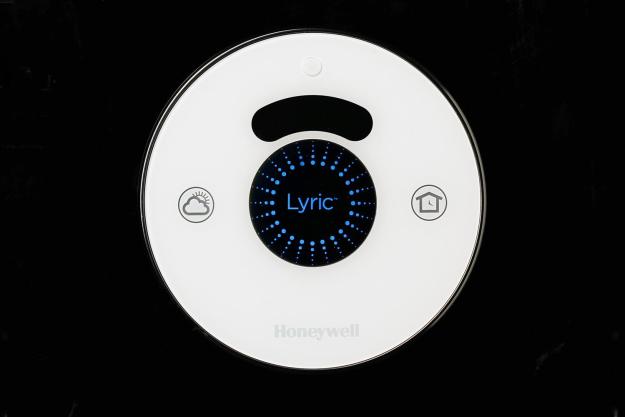 “Despite a few quirks, Honeywell’s Lyric makes it easy to save energy by intelligently controlling your home’s temperature on the fly with the help of your smartphone.”

Just as Apple’s iPhone launched a thousand smartphones, so Nest’s thermostat seems destined to launch a thousand smart thermostats. Witness, Honeywell’s $279 Lyric, a round-faced homage to the Nest model, with a few new twists of its own.

Like many smart thermostats, the Lyric connects to a home Wi-Fi network, allowing owners to change heat or A/C settings remotely using an Android or iOS app. Its round countenance has a center LCD screen (smaller than Nest’s face), a top secondary display, an edge rotary dial, and touch-sensitive buttons. A motion sensor lights up the screen when you’re in the immediate vicinity. The thermostat also knows if you’ve gone farther afield by noting the location of your connected smart phone. This geofencing feature allows you to set “home” and “away” temperatures so that whenever you leave it turns down the heat (or air-conditioning) and then kicks it back on when you return.

You no longer have to remember to switch settings or program the thermostat’s weekly schedule. (By way of contrast, Nest tries to learn your habits—he leaves for work every weekday at 8 and returns at 7— and then make intelligent choices about energy usage.)

Following a trend, there’s no manual in the Lyric box. Instead, you download an app, which asks you to register the device and walks you through the installation and setup — although there are a few missteps.

The software advises you to remove the old thermostat and take a picture of the wire connections (definitely good advice should things go awry). The program also warns you that it doesn’t work with 110/240 volt systems, like gas fireplaces and baseboard electric heat.

To physically mount the device, there’s a mounting plate to cover up larger holes. But if you’re replacing a traditional round Honeywell thermostat, it should fit without the plate. I say “should” because the Lyric is slightly larger than the old round thermostats and may not fit if the original was placed in tight quarters. The Android app instructions also neglect to show you how to insert the wires into the Lyric’s backplate (they press in, rather than using screws to hold them in place).

It is common to encounter thermostat installation instructions that fail to account for some situations. Unfortunately, the Lyric was no exception here. When I enumerated the wires I had (R, W, and C), the app suggested I look at Honeywell help page. Unfortunately, that only invoked a 404 missing page error (good thing that I already knew what to do).

Thankfully, the Lyric does not require a separate power line, so it can draw enough energy off the existing HVAC connection and a disposable AAA lithium battery. To finish the setup, you connect your tablet or phone to the thermostat’s Wi-Fi to configure it, and then switch back to your home network.

Overall, the installation experience was an odd admixture of friendly, cute messages, such as “I’m connected. Register me on the Lyric app,” and abstruse questions, such as asking whether or not you have a “gravity” fuel source, something I have not seen referred to in more than a dozen different thermostat installations. (A Honeywell spokesperson explained that the question referred to steam heat systems.)

The thermostat immediately performs some convenient tasks. It automatically uses the home’s location, for example, to tune in weather information. Not only will it display said information on its dial, but it will use the information to predict when heating or cooling is needed based on the forecast (and send you a message if a severe cold snap is headed your way).

The Lyric app (available for iOS and Android) starts you out with a display of the current temperature and three basic settings: “I’m going to sleep,” “I’m leaving home,” and “I’m arriving home.” You can adjust these settings at will, and then invoke them later with a tap of the button or have them run automatically (based on the time of day that you typically turn in, for example, and the geolocation feature). You can also add your own custom shortcuts, such as “I’m away but she’s home — so make it cooler.”

The geolocation feature works well enough to recognize correctly whether you’re home or away based on your phone. However, it cannot be reprogrammed for special modes. Second homeowners, for example, could use a setting that switched on the heat (or cooling) whenever they got within, say, 60 miles of the house so that it was ready for them when they arrived. Such tweaks are not yet available.

The thermostat itself is fairly straightforward. There’s a snowflake to set cooling and a sun icon to set heating. Rotating the device’s outer ring clockwise turns the temperature setting up. One odd choice, however, is a button that looks like a home – it invokes the “I’m away from home” mode.

Most home owners should recoup the cost of the thermostat within the first two years.

While the humidity could easily account for the discrepancy, we found it too distracting (the temperature on the weather forecast was cooler than what it was inside). Honeywell pointed to a feature — hidden behind several settings pages — that enables owners to turn off the “fine tuning” default. Once that was done, the thermostat returned to normal.

Although the disposable AAA lithium battery is supposed to be used only for backup, we found the thermostat would not function when the battery went dead—which it did repeatedly. In the first five days, we exhausted three batteries. After Honeywell suggested cycling through the heating and cooling modes, the issue seemed to be resolved but we wondered about how long it would be until the next battery died.

Compared to the old, mercury-filled thermostats still in many homes, the Lyric should both save you money and conserve energy. The company will even give you an annual estimate of the savings, based on where you live (colder and hotter climes delivering the most benefit). Judging from a variety of locales, most home owners should recoup the cost of the thermostat within the first two years.

Despite some growing pains, the Lyric is a capable first attempt at competing against the likes of Nest. Its features make it a satisfactory choice for a primary home; but those looking after a second home may question its reliability until some software upgrades are forthcoming.

You might conclude that Honeywell simply imitated Nest, but it’s just as easy to construe things the other way around. Nest copied Honeywell’s original round thermostat design, after all, a fixture in American homes for decades, and gave it a smart, connected twist. Either way, Honeywell has experience in the HVAC market that few other companies can claim. The Lyric thermostat is the first of a planned family of products, and the company has promised to make it compatible with the Apple HomeKit and Home Depot-backed Wink platforms, which should give consumers plenty of choices in the do-it-yourself smart home space by the end of the year.