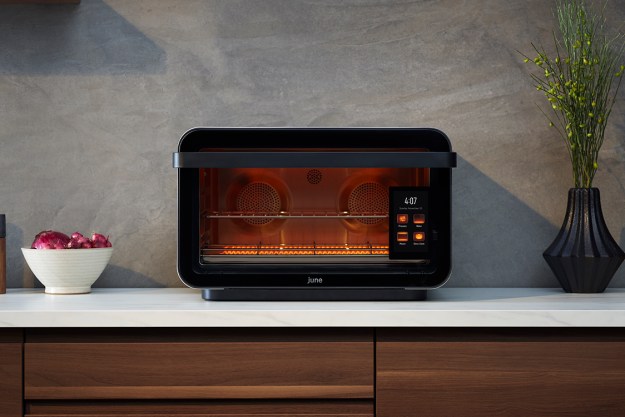 “The June oven can guide you to smarter cooking, but you should still trust your senses.”

Friends: Do you want to hang out?

Me: Sorry, I have to stay with my dehydrating fruit leather.

I recently spent several days trying out all kinds of unique features on the $599 June oven. It’s a smart countertop oven that uses a camera to recognize that you’ve just put a pizza inside, then walks you through some settings to supposedly deliver a premium frozen pizza experience.

The June is a 12.75-inch by 19.6-inch by 19-inch countertop oven. It uses carbon fiber heating elements to cook, has convection fans, and is lit by LEDs. A capacitive touchscreen display controls the oven, which also works with an app. Inside, there’s an HD camera that both recognizes more than 50 food items and lets you watch the cooking process through the app. There’s a port for the temperature probe, which tracks when your burgers or salmon is done. The June also ships with a nonstick pan, roasting rack, wire shelf, and crumb tray.

June doesn’t have an instruction manual, just a “get started” section on its website. The FAQ section isn’t super robust, nor is the site’s community page. The most helpful section is the cooking one, which has 57 articles. It explains the difference between the oven’s roast and bake modes, tells you what food the June can count (toast-able items and bacon), and lets you know that the largest sized pizza you can make is 12 inches.

The image recognition is hit or miss. When you pop something in the oven and close the door, two options appear on the screen: salmon or tilapia, corn tortilla or flour tortilla, cookies or tofu, etc. Sometimes I had to open and close the door again to get the suggestion to appear. Sometimes it was just flat-out wrong. When I was trying the dehydrated fruit leather recipe, the oven suggested salmon. To me, it looked more like ectoplasm. The camera also consistently mistook sourdough bread for chicken breasts.

The first few times I used the June, I checked in on my food regularly. It was pretty fun to watch burgundy liquid bubble up through the crust in my berry crumble. Pretty soon, though, the magic wore off. Maybe it’s a coincidence, but it was around the time that the images started to look blurrier. June urges you to wipe down the camera after every use, otherwise it gets filmy.

What’s on the menu?

Aside from the included recipes, the app isn’t really necessary to operate the oven. Everything can be keyed in using the display on the oven. You can choose from one of the nine cooking modes (bake, broil, reheat, keep warm, toast, slow cook, air fry, dehydrate, and roast) or one of the 47 programs, which has foods like brownies, cauliflower, and steak. The cook modes are a little more hands on, letting you input the time and temperature for things like bake and roast. The programs also offer a bit of customization, depending on what you’re making. You can choose how well-done you want your steak, for example.

After the June recognizes an item, you can then further customize how you want the item cooked. For the bacon option, for example, you can choose between chewy and crispy and let the oven know if it’s thin or thick. I didn’t actually realize this the first few times, through. When the June recognized that I was baking cookies, I swiped through the display too quickly. It said they were homemade. I didn’t know how it had guessed that (wrongly), so I just went with it. It turns out, I could’ve opted for store-bought dough. It’s not clear why store-bought, chilled cookies take two minutes longer to bake than ones made from homemade, chilled dough.

I tried a number of the included recipes with varying success. First, navigating the recipes are pretty easy, but not perfect. I went looking for the elotes recipe by searching for corn. Though the description of the recipe is “Mexican grilled corn,” it only appeared when I searched for elotes. Most of the filters, like dessert, vegetarian, and easy, are helpful, but they’re not perfect. Case in point: the only drink that appears under the beverage filter is mulled wine, but there’s a recipe for hot cider, too.

When I tried to make a pot pie from Whole Foods, the June didn’t offer any suggestions. The Whole Foods partnership doesn’t seem very robust at the moment. There are a number of foods listed under the store’s icon on the oven itself, but that wasn’t helpful when I was wondering around my local branch. First, it’s not my usual grocery store, so I wasn’t sure where I’d find salmon or dover sole. There didn’t seem to be any indication on any food I saw that it was June-compatible. There also isn’t any guidance on the app itself, so I didn’t know I could’ve picked up French fries or chicken taquitos or other items listed in the oven’s menu.

It’s clear June is learning from every cook session. Owners can rate how their experience went and give the company feedback. If you put in six pieces of bacon, but June counts five, it will use your correction to improve its recognition tech. It’s not clear if this exchange of information is reciprocal, though. To be clear, you’ll learn how to better use the June oven as time goes on. For example, it took me three attempts to get bacon that didn’t turn to char with the oven’s presettings. Will that help me make bacon in any other oven? Probably not.

I think the use of food thermometers can help cooks who lack confidence feel more comfortable making chicken, pork, and fish. The problem is that June’s thermometer and custom settings weren’t substitutes for my senses. When I made the lemon-rosemary chicken legs with potatoes, I had to cook the chicken for an extra twenty minutes or so beyond when the oven said it was done. Flipping the chicken pieces over revealed that they were still pretty pink underneath. My regular meat thermometer also revealed some undercooked portions. I’d also managed to destroy the coating on part of the June thermometer where it accidentally touched the top of the oven.

With the breakfast sandwich recipe, I had the opposite problem. The egg, which was supposed to be cooked yet runny, was very solid. There’s trial and error when you first get any new appliance, but the June is supposed to be smarter.

June encourages you to create your own recipes, with a fairly straightforward option in the app. But in order for novices to feel comfortable going beyond one-step instructions (heat to 350 degrees Fahrenheit for 15 minutes), the company needs to be more transparent with how its own recipes work. It lists the cook times for different food categories but not the temperature and cook modes. One of the features that’s supposed to make the June so wonderful is that it bakes your bacon then finishes with a quick broil without your input. But unless I’m watching my app during the entire process, I don’t actually know when and for how long the June is switching between these different cook modes.

That brings us to another problem. The June’s recipes are very rigid. If you’re making the five-spice roast chicken but just want to make breasts instead of a whole chicken, you’ll basically have to exit out of the app and use the June’s chicken breast-recognition program instead. If you want to make asparagus with it instead of the carrots, you can’t indicate you’re making that switch. It would be nice if the oven was smart enough to let you tweak certain programs and recipes to reflect what you’re actually making, instead of what it’s suggesting you cook. While some of the recipes are free, others require a subscription, which costs $50 a year.

Some of this could change with software updates. RIght now, the June only recognizes a single type of food at a time. If you put an egg and bun on the pan, it will only pick up on the bun and offer to toast it. From what I tested, it also has trouble recognizing food that isn’t in the June pan or the wire racks. I filled a pie pan — one of the few non-June pans I own that would fit — with Brussel sprouts, and the camera didn’t even offer any suggestions. For now, though, the June remains useful but not essential.

The food recognition and thermometer aren’t yet flawless, and the oven doesn’t help you tweak its included recipes or programs very much. The June is like a fun but flakey friend. You’ll enjoy spending time with it, but you shouldn’t put unwavering trust in it.

The June is cheaper than another smart oven, the Brava ($995), and it has a glass door, so you can actually see what’s going on inside, even when the camera is covered in grime. The Tovala is also smart and at $249, far cheaper than the June or Brava. Its steam feature is great, but it seems more interested in selling you ready-to-cook meals at $12 each than actually helping you make your own recipes. If you really just want a toaster oven, the $400 Breville Smart Oven Air consistently delivers great results, though it doesn’t have a Wi-Fi connection, despite its name.

June regularly updates its oven’s settings, adding new features and recipes. We’d love to see it add more customization and for the food recognition feature to be able to distinguish multiple items at once.

No matter how you slice it, $599 is expensive for a countertop oven. Even if you’re crazy about air frying or dehydrating, the June has limited capacity. (And dehydrating fruit leather takes five hours, which is a lot for only a trayful.) It has dropped dramatically in price and made some improvements, but it’s still stingy when it comes to collaborating on creating and modifying recipes. For now, you’ll be better off passing.