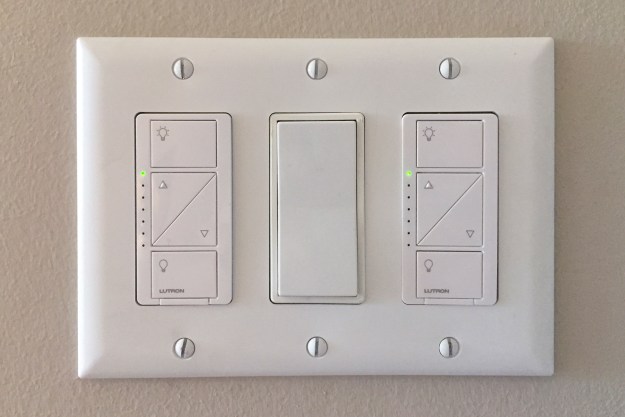 “The Lutron Caseta Smart Lighting Kit is as smart as they come.”

For those who want to get into the Smart Home game, one of the first things you should do is research lighting for your home. There are a bunch of players in this space that offer a broad range of features and pricing. Some companies, like Philips Hue, focus primarily on light bulbs, while others focus on smart switches.

Lutron is one of the latter, and lets you cut your teeth on the do-it-yourself spirit with the Caseta system. Caseta plays nice with just about everyone — Apple HomeKit, Nest, Wink, IFTTT, Amazon Alexa, Google Home, Alarm.com, and home automation platforms like Savant and Control 4. Caseta is one of our favorite lighting systems, but depending on which kit you go with, can be expensive.

There are several Lutron Caseta starter kits out there, but you will want to go with one that includes the Lutron Bridge, which is required for the system to work. You can then build on the system from there by adding more switches. For this review, we take a closer look at the Caseta Wireless Smart Lighting Dimmer Switch 2 Count Starter Kit, which will set you back $160.

Generally, we aren’t a huge fan of how these smart light switches look. Once installed, the wall plate sticks out from our basic cover plate, although it’s not just Lutron’s switches that do this. Many manufacturers are making them this way, and we can’t figure out why.

The kit we received from Lutron included small receivers that plug into a power outlet, allowing you to plug your lamps in and control them either via the app or a small remote control.

The Caseta switch itself comes with four buttons on the face. The top and bottom buttons turn the lights on and off while the two buttons in the middle control the dimmer settings. You’ll notice that with any Lutron Caseta switch system, they dim the lights while turning on or off.

The Lutron Caseta Smart Lighting Kit is the only way to go for DIYers who like to build out their Smart Home system piece-by-piece.

Pro Tip: One thing to note is that some LED bulbs refuse to dim at all under the Caseta system, while others dim and never actually turn off. A little research on Google should help you find the right bulbs to pair with your Lutron system. We’ve been told by professional installers that sometimes it’s the bulb and other times it’s the switch. In either case, we would recommend going with bulbs that Lutron recommends for use with their system.

Installation is just like any other light switch for the most part. Turn off power, connect three wires (line, load and ground) and flip the power back on to the room.

There’s an app for that

Controlling your Caseta lights is extremely simple. In fact, we have the Caseta system installed in a test house with the Lutron RA2 system — a more integrated pro system from Lutron — and were able to seamlessly control the two systems from the same app. Why hire an installer and spend more on the RA2 system if all you really need are a few lights in your house to control it all remotely?

You will want to program the lights using the Lutron app, but once that is set up, you can easily control the lights using your voice via Amazon Alexa or via any smart home hubs you have set up. Scenes are a neat way to push one button and have all the programmed lights behave to your liking.  Leaving for vacation? Program your lights to turn on and off at certain times, so it looks like someone is home. Having a romantic dinner with your partner? There is a scene for that, too.

One of the coolest features with Lutron is their geofencing capabilities. If you are within a range of 1,000 to 10,000 feet of your home, you can have the system turn on or off lights as you leave or approach.

Lutron offers a one-year warranty. The company will repair or replace the system when there’s a defect in materials.

In our mind, the Lutron Caseta Smart Lighting Kit is the only way to go for DIYers who like to build out their Smart Home system piece-by-piece. For those interested in a professional Smart Home automation setup, the Lutron RA2 system is also an option. Some platforms, like Control4 or Savant, will let you control the Caseta lights and shades through their app, but they are not fully integrated, so make sure to install the Lutron app as well.

There are more affordable lighting control systems, but not necessarily as reliable or as compatible as Lutron’s.

You could save some serious dough and go with the Belkin WeMo light switch system, but we don’t think they look as good, and we have yet to hear a home installer recommend them.

We don’t see the Lutron Caseta system going anywhere anytime soon. Lutron is a well-known and well-regarded company that has embraced smart home technology. The long list of compatible platforms out there almost guarantee that someone will support this light switch for years to come. We can’t imagine new features coming out on a regular basis that would make this switch and the system obsolete.

If you plan on putting together your smart home piecemeal, then you aren’t going to find a lighting system more compatible than the Lutron Caseta. It’s reliable, never needs to be reprogrammed, and just works. Even if your power goes out for a while, the system comes back online instantly when power returns. Our advice is to be on the look-out for coupons or discounts; there are always packages for sale on Amazon.