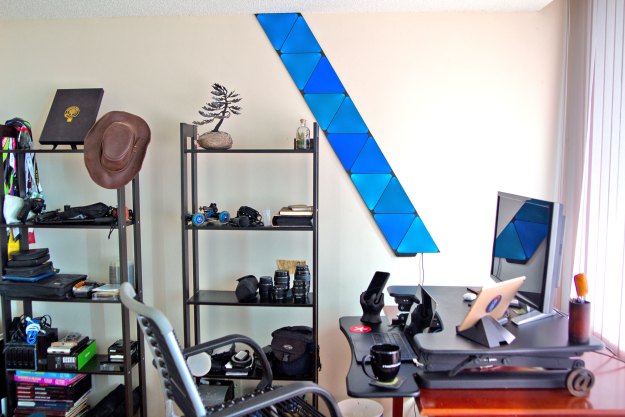 “Classy, polished, and feature-rich. A few performance hiccups do little to ruin the shine on the Nanoleaf Shapes light tiles.”

Nanoleaf is celebrating its 10th anniversary with a limited edition black version of its triangular Shapes LED light tiles. I’ve been enjoying their square Canvas products for a while now, and have since tacked on a few Essentials. A lot has changed in the Nanoleaf ecosystem since then. Let’s take a close look at how the pre-eminent brand in wall tile lighting has evolved.

Set up of Nanoleaf Shapes was a big upgrade from my last run with its Canvas tiles. Mounting plates let you remove the tiles from the wall so you can deal with the adhesive pull-tab separately. The Shapes mounting plates are also a little recessed, so the sticky pads stay flush with the hardware. The Canvas tiles had ugly tabs sticking out the side, and there were widespread reports that the included adhesives didn’t last. I’m feeling more confident about the wider, bigger adhesives that the Shapes tiles ship with. Beside my Shapes array, the old pock-marks left behind by less kind adhesives hammered home my appreciation for the current standard.

The instruction booklet was laid out like it came out of an Ikea box, primarily using illustrations. The app has a Layout Assistant to help figure out your design, including a shuffle mode that takes the number of tiles you have and puts them into a working configuration. The iOS version has an augmented reality viewer that projects the layout at scale onto your wall so you can figure out measurements and fit. Though a somewhat advanced feature like that has a lot of potential to go awry, I found it quite accurate. Too bad it was nowhere to be seen on Android. For someone who has already set up light tiles in the past, it’s easy to breeze through the process, but the app really needs a wizard for installation. For example, Govee will go through everything step-by-step: First, measure your space, now put your linkers in, now put the adhesive sticker on, now press and hold the tile on the wall, and so on. Without some hand-holding, it’s easy to imagine a novice forgetting to put a linker in before applying a tile on the wall.

Once the lights are on the wall and the power is plugged in, the app gets involved with pairing. NFC pairing lets you simply tap your phone to the panel to kick things off. After that, there’s a little communication to feed the lights your Wi-Fi password. I’ve found NFC pairing inconsistent in the past, but glad to have it working smoothly with the Shapes panels. Otherwise having to dig around for pairing codes is a bit of a hassle.

Since I’m old and boring, a single diagonal line is about as exciting as my design sensibilities get, but the options are really astounding. Multiple connection points allow you to build and extend your Nanoleaf collection incredibly easily with a wide range of Nanoleaf Shapes extension kits. That said, the connector type on the Shapes was different than my Canvas tiles. This new Connect+ format was a little easier for installation, but it is a strike against the big selling point of the platform’s modularity. Potential buyers will need to wonder if it will be worth investing in the ecosystem if the connectors are likely to change in a few years. If you do end up getting industrious with your extensions, you’ll need to be mindful of the power supply, since the packaged one can only handle so many lights.

Nanoleaf Shapes tick all of the boxes you would expect from a modern smart light. You can set them to a bewildering range of colors. You can set schedules so they turn off and on at certain times of the day. You can use voice commands via Google Assistant, Siri, and Alexa to control them. A microphone in the control module lets the lights react to music in real time. Third parties like IFTTT, SmartThings, and Razer have plug-ins that give even more utilities. Nanoleaf provides a rich selection of user-generated light recipes to peruse and the tools to cook up some of your own. These range in types from solid colors to music syncing to set animation cycles. This catalog is markedly richer than what you see with Philips Hue, though Govee’s DIY section is about on par.

In terms of lighting quality, Nanoleaf Shapes deliver even colors with sufficient brightness. Saturation is versatile enough to cover muted tones and wacky neons equally well. Nanoleaf Shapes earn particularly high marks for smooth transitions between colors. My experience with Govee lights produced slightly more jagged results, and Philips Hue lights don’t even provide animations out of the box. The source of light is really clear in the Nanoleaf Shapes at the tip of each triangle point. These LEDs were better hidden in their Canvas tiles. Govee’s Hexa Glide light panels were able to diffuse the light better as well.

One of the bigger things I was looking forward to with the Shapes tiles was finally having a Thread border router in the house. Thread promises to be the foundation for the next generation of smart home networks, with increased responsiveness across the board. Matter will be a wider standard built on top of it which should allow for interoperability with a range of brands. Without a border router like the one included in Shapes to act as their hub, my Nanoleaf Essentials bulbs and light strips have been a bit of a nuisance to work with. They’ve basically just been Bluetooth lights that have to be commanded separately from everything else. Not long after installing the Shapes, the Essentials were all automatically tossed onto the new Thread network. This meant the Essentials could finally be included with Google Home management, and PC sync. Unfortunately, Google Home commands still aren’t making their way to those Essentials even though they’re recognized as existing. That’s a step in the right direction and all, but the Thread implementation is still not all the way there yet. Hopefully, future software patches will close the gap.

My old Canvas tiles are all running along the ceiling, so the touch features hadn’t got a lot of use. With my new Shapes layout reaching down right next to my desk, I was able to spend a bit more time with the touch options. Swiping in the four cardinal directions can be mapped to basic controls. This means you can swipe left and right on a tile to go through your saved music scenes, or up and down to go through the normal color scenes. That’s handy, if a little redundant when the control module has hardware buttons that accomplish much of the same. It doesn’t help that there’s a consistent bug that activates these touch commands even when you’re not touching the tiles. The Interactive section of the light recipes aims to leverage the touch sensitivity of the tiles with ambitious premises like Whack a Mole, PacMan, and Simon games. They haven’t proven super intuitive to use, but even the fact that normal light recipes have a degree of responsiveness to touch remains a unique offering in the grand scheme of wall light tiles. The black frame on this particular model is a distinct break from the rest of the Nanoleaf lineup and lends itself to blending in with other darker furniture. It’s easy to imagine setting them up in properly dark areas so they can blip to life seemingly out of nowhere. The one downside here is that with the dark color combined with the touch interactions and the matte finish, fingerprints can become quite visible.

PC sync is one of my major use cases for smart lights. Nothing is quite like watching a nature documentary and having your whole living room awash in greens while exploring a rainforest. Gaming is extra immersive when explosions fill the room with a flash of red and orange. I’ve been able to enjoy this kind of stuff going all the way back to a TV backlight system called Lightpack, and extended it further with my Philips Hue bulbs. My early attempts at doing the same with Nanoleaf Canvas tiles had long been a resounding failure. The PC app had loads of trouble pairing with my lights, so I simply made do with the other lights I already had set up. It was great to give this feature another go because Nanoleaf has squashed loads of bugs. Though the Thread network failed to get my Essentials onto Google Home, the PC app was able to add them to the syncing mix.

The Nanoleaf desktop app provides all of the tools you need to take what’s happening on your PC and project it onto Nanoleaf lights. You can position all of your lights relative to the display within the app so they react appropriately. For example, a light to the right of the TV blooms with yellows and reds while a movie is showing a sunrise on that side of the screen. It’s especially nice being able to rotate this layout since you’ll likely want to flip the mirroring if the Nanoleaf lights are behind you. Four different mirroring modes provide a lot of versatility. 4D is effectively a 1:1 reproduction of what’s happening on your screen. This makes for rapid light changes and can be a little overstimulating if there’s a lot of movement going on. Chameleon is the softest of the mirroring profiles and my favorite of the batch. It casually samples the color palette of the screen and flitters it across the tiles at a leisurely pace. This helps add atmosphere without distracting you from the main event. Again, it’s great to see the Nanoleaf PC app working properly.

The culmination of 10 years of work really shows in the latest generation of Nanoleaf’s flagship light tiles. Smooth transitions, loads of animation options, all of the right third-party plug-ins, and a smooth app with little clutter all amount to a great overall experience. Small hiccups here and there aren’t dealbreakers, and the continual support of products buys me a lot of patience with Nanoleaf.

LEDs have a long life, and the Nanoleaf Shapes tiles have a solid frame. It’s more likely that the app will stop support before the lights die out. Nanoleaf offers a two-year warranty on defective parts should yours cack out early. You can get a sense of the longevity of Nanoleaf products with our follow-up look at the Lines lights.

There are plenty of other light tiles out there, but Nanoleaf is very much the original. Govee comes in a close second, but it has only just added PC sync, and its lighting transitions aren’t as smooth. The one saving grace is that Govee is cheaper. Seven tiles in the Nanoleaf starter kit go for $160, while Govee provides 10 Glide Triangles for roughly the same price.

Nanoleaf Shapes are fun, colorful, and add a load of atmosphere to your home. They’re expensive decorations, but ones that afford years’ worth of novelty. Pick them up if you want to add an eye-catching accent to your home.