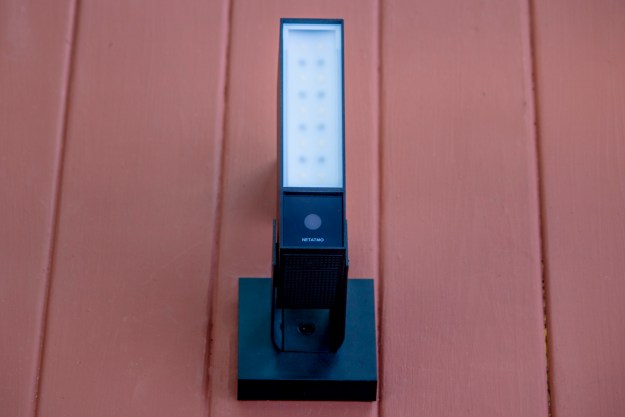 One of the great things about smart home technology is the power it gives us to build our own systems. Companies like Netatmo allow you to pick and choose your home security devices according to your needs. The Netatmo Smart Outdoor Camera with siren ($350, available in Europe, coming to the U.S. later this year), which was announced last fall, is one such device and it joins the smart doorbell and indoor camera to bolster Netatmo’s line of smart home products.

Right off the bat, we need to talk about the hardware. The Netatmo outdoor security camera looks like a device that someone in 1995 thought security cameras would look like in 2020. We first saw this design in 2016, and it hasn’t improved. It’s large and rectangular and not subtle in any way. While many security cameras today go for the low-profile look, Netatmo makes no bones about the fact that this is a camera and floodlight and you’re going to love it, or else.

The Netatmo Smart Outdoor Camera requires a hard-wired connection to your home, similar to the Ring Spotlight Cam Wired. While this has the benefit of never having to charge or change batteries, it also complicates installation compared to other devices in its field. What makes that easier to digest is the fact the floodlight on the camera allows you to replace another exterior light, like a porch light.

Once you remove the existing light (or install a new electrical box — your call) the Netatmo Smart Outdoor Camera comes with almost everything you need to install it. There’s a wiring harness, mounting bracket, screws, and a cover box. The only thing missing is the recommended caulk or silicon to water-seal the cover box to the wall. That’s not surprising, but it’s good to know ahead of time. Once installed, use the app to connect the camera to your Wi-Fi and you’re off to the races.

The camera covers a disappointing 100-degree field of view, which is the smallest of any camera we’ve tested, but it can identify objects with a long field of view. In our testing, the range was limited to about 10 meters, which the camera covered admirably, and it advertises a total of 20 meters.

The built-in floodlight can turn on automatically when it detects movement, or it can be turned on and off from the app. Plus, it’s dimmable within the app as well. At full brightness, the floodlight is very bright and covers a wide area. It could easily replace an existing floodlight in your home. Built-in night vision is also quite good, though without the same 20-meter range.

It could easily replace an existing floodlight in your home.

When the camera detects movement, that’s when the A.I. comes into play. The camera can distinguish between people, automobiles, animals, and other motion. In the app, when an event occurs, icons show you what kind of object was detected. Plus, a thumbnail not only shows you the object in question, but the app smartly crops in around the object to give you a clear view of it before you even open the clip. For example, if a cat crosses into the corner of the camera’s alert zone, the thumbnail will crop to the cat, even though it’s not in the center of the frame. It would be easy to just crop to the center of the frame, or shrink the entire screen down to a thumbnail — neither of those would be helpful. Netatmo’s A.I. allows you to quickly identify why the clip was captured.

Get in the zone

Speaking of the alert zone, you can customize where the camera tracks motion, but the implementation is not the best. You’re limited to rectangles in the frame, but you can have multiple rectangles. If you have a diagonal area you don’t want to be detected, you have to create multiple rectangles — it’s a little annoying.

When motion is detected the clip is saved to the included 8GB memory card, which is expandable to 32 GB. According to Netatmo, 8GB covers about one hundred clips. That sounds like a lot, but in my backyard, with cats roaming around all over the place, that’s only about three or four days. As the card fills up, the oldest records are deleted. You can also add personal cloud storage for recordings. Options include Dropbox or a private FTP server. Aside from that, the only way to gain space is by swapping for a larger microSD card. You can’t lower the resolution, and to be honest you wouldn’t want to.

Add to that, there is no option to record 24/7 or scrub back through a day’s worth of footage. You can only watch the clips that record when something is detected. You can also watch the camera’s live view. Most of the time, this is plenty, but if you’re someone who wants to scrub back to any given time, this camera is not for you.

The siren on the Netatmo is quite loud at 105 decibels.

The siren on the Netatmo is quite loud at 105 decibels. You can trigger the siren via the app; there is no automatic siren setting. That’s probably for the best. If you’re going to anger your neighbors, it’s a good idea to be sure you need to.

The camera works with Google Assistant and Alexa. You can ask an Assistant-powered smart screen to show you the camera, and it will display the live feed, which is great.

One downside is the recording resolution and quality. While Netatmo advertises recording at Full HD, there’s quite a big problem with pixelating, even when playing back recorded clips. That could be a function of my home networking setup, but cameras installed by Vivint on the same network do not have the same problems. Plus, the camera has a problem with the sky. It’s hard to distinguish the outline of my shed against the bright sky, which doesn’t make for the best experience.

This is a good implementation of a three-in-one outdoor security solution, but there’s still some work to do. Even when you take depth into account, a narrow field of view is not great for a camera. You won’t be worried about what someone 20 meters away is doing; you’re worried about your house.

While the A.I. does some smart things with clips and thumbnails, the lack of 24/7 recording is a miss. This allows Netatmo to say the service is “free all the time” which is great, but I wouldn’t mind paying something every month for 24/7 recording. Plus, the fact that it has to be hard-wired to existing electrical makes installation troublesome, almost to the point of needing a professional.

Yes. This camera has some good ideas, particularly in the A.I. implementation. But the Ring Spotlight Cam or Arlo Pro 3 Floodlight give you similar features in a more attractive package for $100 less.

Construction of the Netatmo is solid, and assuming everything is installed properly I can’t think of any reason to be concerned even in the worst weather. The camera comes with a limited, multi-year warranty depending on the region and where you buy.

No. Smart outdoor cameras are a crowded category, and there are too many other (and cheaper) options out there.