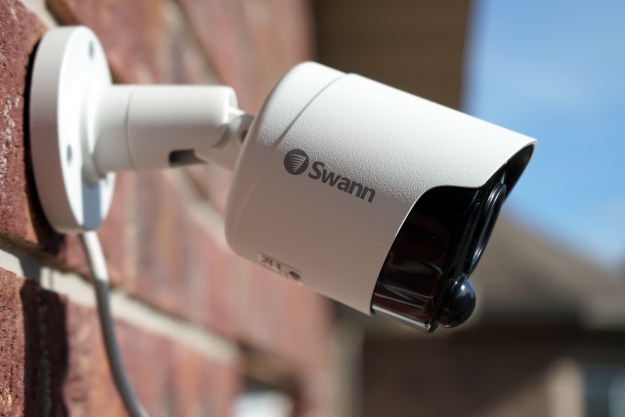 A 30-year veteran of smart home security, Swann has likely viewed the recent explosion in competition with a wry smile. It’s dabbled in low-cost, high-performance devices — last year’s $150 Swann Smart Security Camera proved itself to be a capable and versatile alternative to Arlo. But the 4K Ultra HD NVR Security System sees the company return to its roots with a pricey, powerful, and ultra-modern take on prosumer multicamera setups of the past.

The cameras are the real stars of the show. Alongside pin-sharp clarity, Swann’s swanky cameras are kitted-out with enhanced features that elevate them above their peers. All six are equipped with integrated PIR sensors that are triggered by motion or heat detected at a range of up to 32 feet (10 meters). Two of the cameras are further boosted with integrated security spotlights, supporting color night vision with a 115-foot range. A standard night vision setting on all cameras extends the range up to 150 feet.

Where budget systems favor cheap, plastic casings, Swann’s compact cameras are clad in aluminium, with an IP66 weatherproof rating guaranteeing they’re fit for indoor or outdoor use. The contrasting white-and-black cylindrical devices are noticeable enough to provide a deterrent for potential intruders while retaining a sleek, contemporary style.

One possible drawback is that Swann’s cameras are wired, which means you’ll need to carefully plan installation points, run wires through walls, and experience all the joys of managing the six supplied 60-foot cables. Compared to older systems, which are equipped with separate power and data connectors, we’re pleased to see Swann offer the simplicity of a power over Ethernet option, but if you’re seeking a quick and easy installation, a wired system is not for you.

Swann’s wired setup is much tidier than the Defender 4K system we recently reviewed. Cables from all six cameras neatly terminate at the NVR, with no need for separate power supplies. With eight Ethernet ports available, there’s also plenty of room for expansion. With your cameras installed, connect the compact set-top box to your router, a power outlet, and a TV or monitor using the supplied HDMI cable and you’re good to go. Twin front-mounted USB ports are supplied to connect a mouse (also provided) and optional USB drive for video backup or firmware updates.

The Swann NVR boots reasonably quick and automatically detects 4K displays, switching screen resolution as required. Prosumer smart camera user interfaces are typically more complex than entry-level systems and Swann’s is no exception. However, while it takes some time to get familiar with the full range of features and tweakable settings that are available, we found mastering basic recording and playback to be simple enough.

A handy startup wizard gets you up and running with time and date settings. From there, you can switch between on-screen camera layouts using the mouse, select a camera for full-screen monitoring with a click, and take advantage of overlaid menu options for manual recording, screen capture, video playback, and camera display settings.

Having reviewed a swath of 1080p smart cameras over the last few years, believe us when we tell you that upgrading to 4K offers a noticeable leap in image quality. Smearing, pixelation, and image artifacts begone! All six Swann cameras deliver crisp, beautifully balanced daytime images with good default brightness and contrast. Each camera’s output can be individually adjusted in terms of hue, brightness, contrast, and saturation available to overcome the challenges of shady or overexposed installation points.

Upgrading to 4K offers a noticeable leap in image quality

One major feature enhancement over many smart home security systems is support for color night vision. Available exclusively on the two spotlight-equipped cameras, video is well-illuminated, with natural colors and good visibility, even at long range. As you’d expect, images are a little noisy due to the low ambient light, but the camera’s twin LEDs are bright enough to illuminate the immediate area and boost clarity. With the spotlights extinguished, night vision reverts to a standard monochrome image (as you’ll find on the four regular cameras). Again, clarity and range is decent, but visually, we found it to be a step down from the system’s fabulous night vision setting.

While you can toggle the camera’s spotlights manually, it’s best to take advantage of the integrated PIR (passive infrared) that supports both heat and motion detection. Alongside the security lights, the PIR can also trigger an integrated siren, which we wouldn’t describe as deafening, but in the dead of night, it should be more than sufficient to ward off potential intruders creeping around your premises.

If there’s one criticism we have about Swann’s otherwise first-class 4K cameras, it’s a limited field of range. A narrow viewing angle of just 93-degrees is well behind cheaper smart home security systems. It leads to some challenges when positioning your cameras (we strongly advise you to check your views before fixing the cameras in place), but with six devices in the box and capacity for an additional two, coverage shouldn’t be an issue.

Throughout our tests, we found the Swann 4K Security System to be responsive. Switching from live monitoring to manual recording and on to playback was seamless, with no noticeable lag. Recording six 4K streams (at 15 fps) posed no issues, but live monitoring of multiple streams does incur one minor resource limitation. The system will allow you to stream one of your camera feeds in HD, but will automatically switch the livestreams of your other cameras to SD. Try to bump a second stream to HD and the NVR complains about available resources. But when individual viewing feeds in full-screen — via manual selection or Swann’s automated sequence setting – you’ll be rewarded with full UHD clarity.

While competing prosumer security systems can be a struggle to work with, we were greatly impressed by Swann’s ease of use. When setting up the accompanying HomeSafe View mobile app, the NVR was automatically detected on the home network and connection was completed in a matter of seconds. It was a seamless experience compared to the clunky, repeated QR code scans and multiple password hurdles required by systems like Defender 4K.

Despite the strong start, life with Swann’s mobile app quickly became cumbersome. A little work is required to get the best video-streaming performance from Swann’s mobile app. The default MobileStream video setting — designed to balance streaming video quality and bandwidth — comes with the smeariness and artifacts we encounter on cheaper systems. We were relieved to find a MainStream video setting that bumped streaming resolution up to full quality. Images are also vertically-stretched — again, aspect ratio can be adjusted in the app’s settings, but we found we had to do so repeatedly, each time we used the app.

Elsewhere, HomeSafe View’s user interface is behind competing smart home security apps. Recorded video from all six cameras is available for mobile playback, but clip navigation is more cumbersome than we’d expect. Dig into the menus and you may encounter basic spelling errors (“Set Push Notifaction”) and confusing messages to ignore your phone’s battery optimization settings to enable the aforementioned “notifaction.”

Swann is quick to boast about the system’s support for the Google Assistant, which allows you to cast camera feeds on compatible TVs. Unfortunately, we found that Swann’s in-app vocal setup instructions failed to work, and despite working through alternative configuration steps in a long community forum post, we remained unable to use Google Assistant on our Android phone or a Google Home speaker to communicate with the home security system.

From a hardware perspective, Swann’s fabulous 4K cameras set a new standard of innovation in smart home security. Sturdy, stylish, and packed with features, the quality of the spotlight- and siren-equipped models is matched only by their versatility, while the four “standard” cameras also deliver wonderfully clear images. While installation of a wired security system is always going to be tricky, the addition of power over Ethernet cabling to a capable, high-capacity network video recorder is helpful.

Sturdy, stylish and packed with features

Sadly, Swann’s mobile app fails to deliver the same standard of quality and usability. It’s functional but quite painful to use and lags well behind leading smart home security systems. While we’d certainly recommend the Swann 4K Ultra HD NVR Security System, we do so with the hope that the company takes the steps required to review and overhaul its HomeSafe View software. Such high-quality hardware simply deserves better.

With 4K home security systems set to become mainstream in 2020, the Swann 4K Ultra HD NVR Security System is a top pick for those seeking a hardwired option.  The $300 wireless Arlo Ultra is a simpler install with fabulous image quality, wide field of view, and a better mobile app, but the cost of creating a six-camera system to compete with Swann’s coverage quickly adds up.

An 18 month warranty — boosted to 24 months with registration — is generous, so you should expect this home security system to last at least that long.

Yes. Despite our criticism of the mobile app, the Swann 4K Ultra HD NVR Security System is an innovative and versatile smart home surveillance package.