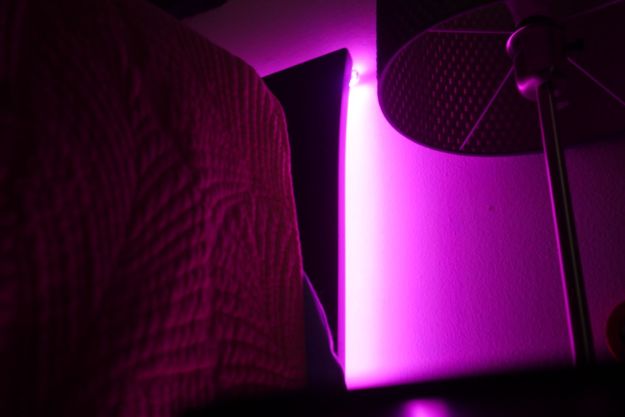 If there’s one thing I love about the smart lighting space, it has to be that they’re more affordable than ever before. There has been a sudden shift, with many more players offering ultra-affordable smart lights that cover the gamut. One of them is Wyze, who earlier this year released its Wyze Bulb Color, which I called the worthiest cheap smart light bulb around.

Well, the company has yet to miss a beat with an impending release of two new offerings in the lighting space — the Wyze Light Strip and Light Strip Pro. Affordable pricing is yet again the focal point here, starting at $27 and $32 respectively, but with so much competition in the space, they really need something extra special to stand out at this point. I’ll be focusing mostly on the Wyze Light Strip Pro for this review, since it can deliver up to 16 colors per strip — while the standard Wyze Light Strip can produce only one color at a time.

Depending on the project, you can adjust the length of the Wyze Light Strip Pro to any length you’d like for that custom fit. There are marks on the strip where you’re supposed to cut to make it simple to trim, but I’ve never been a fan of cutting light strips in the first place. Before removing the covering for the adhesive, it’s best practice to check beforehand to maximize all of the strip.

For tougher surfaces where the underside adhesive isn’t enough to hold up the weight of the entire strip, like unevenly plastered walls, there are adhesive clips you can use to help guide and firmly keep it in place. However, I would’ve liked to see screws for added support. That’s because, in my experience, the adhesive on these clips tends to wear down. Lastly, it connects directly to Wi-Fi, so I’m glad there are no extra bridges to connect with this setup.

In order to interact with the LED light strips, you’ll need to access the Wyze app — available for Android and iOS. For the most part, it’s broken down into three main sections: Design, scenes, and music. Design is where colors can be manually picked from the color wheel, scenes are preset color options, and music offers neat lighting effects controlled by music.

Speaking of lighting effects, there’s a microphone built into the controller on the lights strip, which is the bridge between the power adapter and the actual light strips. To get the right amount of reaction with music mode, I set the sensitivity of the controller to high — for the effect to coincide properly with the music. Setting it to low doesn’t do a whole lot.

In addition to remotely accessing either smart LED light strips through the app, they support Alexa and Google Assistant for voice control. I find it easier sometimes to just simply speak the command to my smart speaker or display.

Between the two, the Wyze Light Strip Pro offers more lighting effects because it can display up to 16 colors at a time. If you want to really jazz up the décor around your home, go with the Pro because of its advanced effects. You get some really neat color combinations that paint rooms in rainbow colors, but I crave lights that are a bit more saturated in tone. Saturation is decent, but it doesn’t produce the same deep reds and vibrant blues I get from other LED light strips.

I crave lights that are a bit more saturated in tone.

Despite this, the brightness output out of the Wyze Light Strip Pro isn’t too shabby. It’s potent enough to use for reading if the strip is exposed, versus when it’s discretely installed as an accent light. Even though the light strip dazzles in an explosion of colors with music mode, I wish these special lighting effects could be turned on at any time — without the need of having to play music to produce the effects. Honestly, a preset for these effects would be ideal, but it irks me why it’s not offered because it’s an easy addition.

Beyond that, it has the basic set of features I come to expect to find in smart lights — like the option to set sleep routines, timers, and scenes. Going one step further, there’s also Vacation Mode that will automatically turn the lights on and off, and Sun Match that sort of mimics natural sunlight throughout the day.

Wyze takes everything it’s known for in the space and delivers a decent set of smart LED light strips that aren’t too costly. Between the two models, the Wyze Light Strip Pro is what I’d recommended for the simple fact that it offers more color effects. Regardless of what you choose, they’re both affordable on any budget and offer a decent amount of length for the cost.

The Twinkly Line is one of the most interactive smart LED light strips I’ve used, offering users custom lighting effects and superior color saturation. However, you’re paying nearly double the cost with a shorter length to play around with.

For a basic smart LED light strip, Govee’s options are easier on the wallet — often fetching around the $20 range for a 16.4-foot length.

Between the two, the epoxy covering over the Wyze Light Strip Pro makes me feel confident that it’ll handle wear and tear better because dirt and debris wouldn’t interfere with the components. Either way, there’s a 1-year limited warranty for both LED light strips that covers against defects.

You bet. Wyze’s smart LED light strips may not be outstanding in just one particular area, but they’re priced modestly with enough standard features to accent any room in the home.