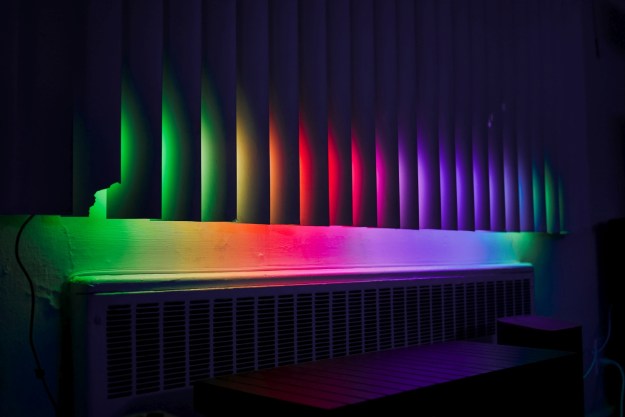 “Twinkly's special effects are plentiful and adds the perfect ambiance to any room.”

After putting up the Twinkly Flex a couple of weeks back, I didn’t think there would be any other smart lights that could come close to matching the same level of excitement I had with the Flex’s dazzling light show. Well, that’s unless it’s something from Twinkly. The company’s shift to offering year-round smart lights has impressed me so far with the Flex’s performance, instead of just relying on its bread and butter holiday lights.

With the Twinkly Line, however, it’s entering a space that’s already saturated by other competitive smart LED light strips. Don’t be fooled to think this is your ordinary LED light strip because the magic is not simply in its brightness intensity or different colors it can produce — but rather, the special effects you can cast for a custom, unique light show.

Unlike the Twinkly Flex, which required more work because it needed to be fastened to the wall with screws, the Twinkly Line is much easier to install. Although, I had to be meticulous about its placement because this is meant to act as an accent light — so you really don’t want it out and in the open. I ended up putting it underneath the window sill in my living room, which is somewhat hidden aside from the fact that the power cable snakes around one side of it.

The 5-foot length of the Twinkly Line proved a bit challenging because initially, I was going to install it inside one of the cabinets in my entertainment center. However, it simply wasn’t long enough to cover what I needed. You can technically extend the length by purchasing additional 5-foot extensions, which are sold for around $37, but the cost to cover what you need will add up quickly — the initial cost for the Twinkly Line is around $67.

Attaching the Twinkly Line to a surface is pretty simple because the underside is covered by an adhesive. Some pressure is necessary to ensure that it stays put while attaching the three-pronged connector to one end of the Line to complete the installation. There are clips that come included with the package, but I found the adhesive on them wasn’t strong enough to stay firmly in place overnight — finding it instead dangling off the wall the next day.

Fundamentally, the Twinkly Line functions in the same manner as just about any other smart LED light strip out there. You can select different colors to choose from through the app, but what makes it unique are the various special effects that Twinkly offers. From various colors in a rainbow pattern to a neat effect that blends two colors that start from both ends of the strip, it’s the customization and special effects that make it unique.

While there are several different presets to choose from in the app, you can customize the effect more because of the ability to map out the lights using your smartphone’s camera. This way, the effects will coincide properly with what you see in the app, but this is something that becomes more pronounced when you start to group together different Twinkly lights — resulting in elaborate pattern effects that can go from side to side. Using the Twinkly app is straightforward, and the ability to easily customize the light pattern is what makes it special.

I really enjoy that Twinkly has moved into the smart LED light strip category with the Line. Colors are punchy and moderately bright in comparison to some other comparable light strips. It’s certainly not as potent as the Twinkly Flex, but the Line still emits enough light to complement key lights in the home. It’s not overpowering, which is what I like in an accent light.

Some of the special effects are quite dazzling.

Some of the special effects are quite dazzling, which is what I’ve experienced with all of the Twinkly smart lights I’ve come across so far. The only real limitation here is just the length, which at 5 feet, will force you to really think about its placement. In particular, it’s not quite as flexible as other LED light strips I’ve used, so trying to bend it to make a 90-degree angle is almost impossible — albeit, the plastic covering over the strip certainly gives it the durability to potentially hold up long term.

Regardless, the Twinkly Line’s performance is exceptional no matter what time of the year it is. The experience is also made better because it’s compatible with Alexa and Google Assistant for quick and easy voice control. I managed to make it a part of my living room light setup, so it can turn on/off all the lights in the room when I ask Google Assistant.

The only disadvantage here is that the Twinkly Line’s pricing is more than other smart LED light strips. You’ll have to fork over about $67 for the base 5-foot strip, then an additional $37 for each 5-foot extension. That undeniably adds up quickly if your budget is tight.

Still, it’s a perfect complement if you already have existing Twinkly smart lights because of the grouping function, which I might add, makes for a dazzling showcase when you have several lights running the same effect.

If you’re looking to save money, you’ll get a lot more value out of the Govee Smart LED Light Strip For $34, you’re getting 32.8 feet of lighting to work with, which is more than plentiful to cover larger spaces and nooks.

Philips Hue offers its own smart LED light strip, which is priced a bit higher than what the Twinkly Line fetches for at the moment. You technically have 6 feet of lighting to work with, but it’s a no-brainer decision to buy if you’re already invested in the Philips Hue ecosystem.

The tough outer casing of the Twinkly Line feels super sturdy, so even though bending it to form an angle is out of the question, the LED lights are encased to prevent moisture from messing or potentially ruining the light. In the event of a defect, there’s a one-year limited warranty that comes included with it.

If the cost isn’t too much for you, then the Twinkly Line has a unique lighting show that’ll make your neighbors jealous as they watch the show from outside.