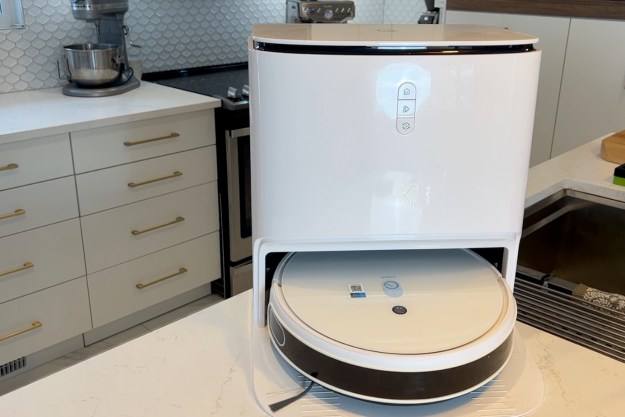 “There's a lot of features packed in here for a reasonable price, but there's a few reasons it may not work as well as it should.”

Robot mops are the newest floor-cleaning revolution, and while early designs simply modified a robot vacuum to pull a damp cloth across your floors, companies have been innovating ever since. Case in point, the Yeedi Mop Station Pro.

I recently got my hands on one to share what it’s like to set up and use, how effective the cleaning is or isn’t, about its special features, and if we can recommend it to you.

What is a Yeedi Mop Station Pro?

This robot is made primarily for hard-surfaced floors, and it prioritizes mopping over vacuuming. Let me explain: The robot comes with two plates. One is a large 750-milliliter dust bin that is used for vacuuming only. If you want to both vacuum and mop together, you can swap in the mopping plate which has two microfiber cleaning pads, plus a very small dustbin.

It uses a companion app to control the bot, schedule cleans, and adjust settings.

Set up and smart mapping

Start things off by signing up for or signing into the EDD app (it’s the companion app), then initiate a mapping mission, which the app will prompt you to do.

The Yeedi Mop Station Pro mapped my home quickly and I was able to add labels and adjust the boundaries of my spaces, though I wasn’t unable to divvy up my largest space inside the app — a dual kitchen and living room. I’m not sure why, but it simply wouldn’t work.

The major cleaning perk in this bot, though it does exist in at least one other brand (Ecovacs X1 Omni), is a dual-spinning microfiber mopping pad. The mopping pads are quite plush, and they seem adept at scrubbing uneven floors. Yeedi says they spin at 180 times per minute, so they should have the ability to remove dried spills.

The Yeedi app will control the amount of water flowing through the mopping pads for a more thorough clean, or one that would dry quicker.
In a bit of a departure from other mopping robots, the onboard mopping tank is neither visible nor accessible to you. It hides somewhere deep inside the robot, but that’s fine since the mop station fills that onboard tank. You can actually hear the Mop Station Pro gurgling as it tops up the tank before it heads out to work.

The second innovation in the Mop Station Pro is that the bot will wash and then dry the mopping pads after it’s washed the floors.
Two 3.5 L water tanks separately hold both clean water and wastewater from the cleaning cycle.

In a bit of a departure from other mopping robots, the onboard mopping tank is neither visible nor accessible.

A robot vacuum is only as effective as its suction power. Fortunately, Yeedi Mop Station Pro has up to 3,000 pascals of adjustable suction power, which is actually a bit above many other robot vacuums.

The larger vacuum-only dustbin is also much bigger than that of most robot vacuums on the market, which means it stores more dust for less emptying, and that’s actually kind of important since the Mop Station Pro does not have automatic dustbin emptying. When I mentioned earlier that this bot prioritizes mopping, this is one of the ways it does that: You get servicing of the mopping pads, instead of hands-free dustbin emptying.

One other early thing I discovered in my testing is that, because it’s up to you to empty the dustbin, if you forget and it gets too stuffed it can clog up the underside intake pretty badly. More than once I thought it was doing a poor job vacuuming, so I took things apart and found too much dirt and hair clogging things. A word to the wise, frequent dustbin emptying is going to be important for best operation.

One of the last things you want for a robot mop is for it to roll over your carpets and wet them. Fortunately, the Yeedi Mop Station Pro has a carpet sensor, and in my testing with this, it’s noticeable. If the mopping plate is installed, the vacuum will only nudge its nose onto the carpet enough to detect it, then it will back off. This feature worked really well. In vacuuming mode and with the mop removed, the bot will also up its suction power to get dirt out from deeper carpet fibers.

The Yeedi Mop Station Pro’s 5200 mAh battery allows for 180 minutes of runtime on a charge. That’s a large battery and excellent battery life for these types of robo-vacs. Plus, when the Yeedi bot is in a larger space it will automatically recharge and resume cleaning if needed. Not necessarily the case in my home, but good to know.

I put all my robot vacuum mops through the same tests. I sprinkle fine flour, middle-sized debris like rice or oatmeal, and larger biscuit pieces on both carpet and hard floors to test the vacuuming. To test the mopping, I spill things like red wine and let coffee dry.

whether or not you should buy the Yeedi depends on if the pros outweigh the cons.

In my cleaning tests with the Yeedi Mop Station Pro, I found the robot to be kind of intermittent in its cleaning abilities. Sometimes it cleaned really well. Other times, it didn’t.

For example, on my tile floor while in mopping mode, it missed part of a red wine spill, but in a later coffee spill test, it was able to mop up most of it. Even so, it did leave enough coffee residue behind that there was a noticeable film.

On one dry spill of oats, it scattered most of the debris with its spinning corner brush and never returned to vacuum it. Another time, it did.

On carpets, Yeedi Mop Station Pro-bot was similarly on and off. I’d say on average it was able to get about 75 percent of any vacuum debris, but that’s far less than what I’ve experienced in other robot vacuums I’ve put through these same tests.

In the end, I opted to change the cleaning settings to have the robot go over everything twice, and that went a long way toward getting a more thorough clean.

As most robot vacuum mops do these days, the Yeedi Mop Station Pro has voice control through Google or Alexa. You will need a separate Google or Alexa device in order to set this up, and I opted to connect mine to my Google Home system. I won’t clutter things up here with a how-to but the Google Home app walks you through it and I had voice control moments later.

When it comes to whether or not I’d recommend this bot, it’s got some good qualities and some concerns, so my opinion is divided. On the pro side, it mapped quickly but I wasn’t able to properly divide my largest room. I like the design and that it both vacuums and mops, and the fluffy mopping pads can be quite effective, plus the water tanks are big, meaning less filling and emptying. Yeedi Mop Station Pro will both vacuum and mop at the same time, though on the downside its dual-purpose dustbin only holds so much dust when in mopping mode.

The mopping quality was mostly good, but not perfect, and the vacuuming, though sometimes not great on hard floors, was better on carpets and rugs. When I emptied the dustbin it was quite full, proving it does pick up a lot of dirt. Other Downsides? I do wish the mop station was also able to handle automatic emptying of the onboard dust bin, since forgetting risks clogging up to intake.

There are actually a lot of features packed into this bot for a reasonable price, and the cleaning power is quite good — when it’s good. But when it comes to the execution of cleaning it doesn’t perform as well as some other bots I’ve tried. I think this robot has a promising future in a second-generation model, but for now, whether or not you should buy this one will depend if the pros outweigh the cons.