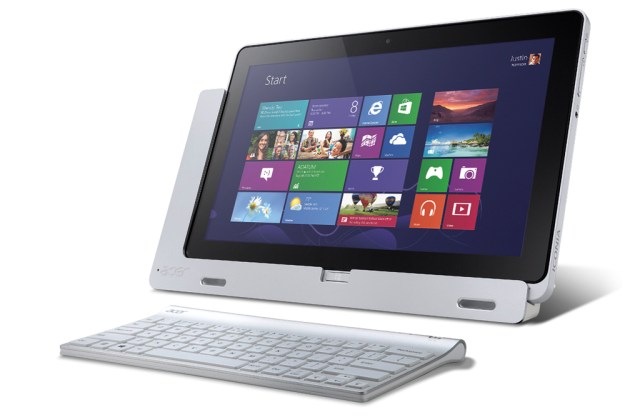 “Acer has delivered a surprisingly powerful and affordable hybrid device that is hampered by design issues.”

Users have tried adding keyboards to tablets ever since the release of the original iPad. Often, these third-party docks or keyboard cases have been of questionable quality and utility, but that hasn’t stopped consumers from buying them.

Now Windows 8 is giving PC manufacturers a chance to be a part of the action. Most of them are focusing their efforts on convertible laptops. The problem with convertibles is that the tablets on most of them aren’t usually great. The tablets are often hefty, and those that aren’t pack a lackluster Intel Atom processor.

Acer is taking a different approach with the Iconia W700. Instead of building a laptop that can also be used as a tablet, the company has shipped a tablet that just happens to have a keyboard. This keeps the device portable but doesn’t sacrifice performance. Our review unit, which arrived with a Core i5-3317U, offers specifications on par with any convertible or Ultrabook on the market. Has Acer managed to create a wonderful hybrid, or does the Iconia sacrifice too much in its attempt to be everything to everyone?

A different kind of dockable PC

All of the Iconia’s hardware sits inside the meaty silver tablet. At 11.6 inches by 7.5 inches, it’s not much wider or longer than the Google Nexus 10. Unfortunately, the Iconia suffers from the heaviness its powerful processor demands. Its two-pound weight adds notable heft relative to an iPad or Android tablet, and the bulky back cover is half an inch thick.

Acer could have hidden these facts with a rounded back or tapered edges, yet no such effort was made. The result is a blocky, uninspiring design that already looks a few years old. Still, we can’t knock the tablet’s quality. Its metal body feels sturdy and looks handsome.

We’re less impressed by where the tablet’s buttons are located. They are all positioned for use in landscape orientation, yet our past experience with tablets has found us mostly holding them in portrait. This is preferable when reading documents or browsing the Web because more content can be displayed at once. Acer appears to have placed them so they are easy to use with the dock – but isn’t the Iconia a tablet first, and PC second?

As for the dock, well, it’s all beauty and no brains. The tablet can’t be easily inserted or removed with one hand, its three USB 3.0 ports are hidden around the back instead of placed along the side, and the stand, which is solid white plastic, can’t adjust for tilt. We were also frustrated by how the device automatically switches to the desktop view when the tablet is docked, even if software is open. No! Stop! We were using that app!

Acer executed the keyboard with more thought. Its flat surface would normally annoy us but meshes with the Iconia’s semi-portable vibe. Keys are properly sized and their feel is excellent. We were able to write several long articles, including this review, without complaint or discomfort.

We’re pleased by the Iconia’s 11.6-inch 1080p display. Our tests revealed excellent contrast, deep black levels, a wide color gamut, and respectable maximum brightness. Though not the best display we’ve tested, we’re impressed by what Acer has managed to cram in this tiny device. This tablet’s panel puts most laptops available today to shame.

Praise aside, we did encounter a problem. Cramming this many pixels into a small screen causes an issue of scale. Windows renders graphics by pixel, so if the pixels are small, so too is the user interface. Microsoft’s built-in scaling solves this problem in some areas, but not all, and scaled icons are often blurry and unattractive. Applications like Paint and WordPad can be frustrating to use.

Audio quality is poor when the tablet is used without the dock. There’s simply not enough volume to satisfy and what audio does comes through has a tinny quality. Docking the tablet improves quality through clever use of sound ports, but this only puts the device on par with an average laptop.

Making the most of the battery

Though heavy for a tablet, the Iconia W700 remains light enough to easily carry in a backpack, messenger bag, or even a large purse. Acer even includes a surprisingly luxurious leather case with the tablet.

We were worried that the tablet’s small 3-cell battery would make all this irrelevant, but the system proved we had no cause for concern. Battery Eater did all it could, yet it still needed 3 hours and 24 minutes to drain the Iconia. The light-load Reader’s Test extended life to 8 hours and 23 minutes, and the Peacekeeper browser test returned a result of 5 hours and 51 minutes.

Granted, these results are below-par for the tablet category, but they’re excellent for a small device with an Intel Core processor. We also think the results are as adequate as they need to be for most users. A tablet of this size is best suited for use around a home or office, so a power outlet is likely nearby.

Power tests revealed consumption on par with an Ultrabook. At idle, with the display at 50 percent, the system consumed 12 watts of power. Setting brightness at 100 percent increased this number to 13 watts, and stressing the processor with our 7-Zip benchmark changed consumption to 25 watts.

Some users will be surprised to hear the Iconia W7 has a system fan. Most tablets don’t. A fan is required because the Intel Core processor is simply too powerful to survive on passive cooling alone.

Fortunately, the fan is quiet. Its volume is generally below ambient noise at idle and reaches no higher than 42.7 decibels at maximum load. It’s certainly noticeable in a quiet environment, but it isn’t difficult to ignore.

Though the fan doesn’t work overtime, it does manage to keep the system cool. At idle, we measured a maximum external temperature of 82.6 degrees Fahrenheit, which increased to 94.1 degrees at load. These results are excellent. The iPad is much warmer at load, as are most powerful Android competitors.

While there are dockable PC tablets on the market, most are powered by Atom processors that lack the grunt to perform as users expect. Acer has managed to cram a Core i5-3317U in the Iconia W700, and it provides solid benchmark results. SiSoft Sandra’s Processor Arithmetic test reached a score 35.88 GOPS, and the 7-Zip test managed a result of 7,345. Both are exactly in line with laptops that have the same processor.

We were surprised to see the tablet score 4,551 in PCMark 07, a test that helps us figure out how quick a laptop will feel in day-do-day use. The Iconia’s score is good for any system and great for a tablet. Its fast solid-state storage deserves the most credit for this result. Users can expect the tablet to respond quickly even when multiple apps are open.

3DMark 06 and 3DMark 11, our graphics benchmarks, came to respective scores of 3,609 and 504. These are below average numbers for Intel HD 4000. We suspect that thermal throttling (a reduction of performance to limit hardware temperature) is to blame. The simple 2D and 3D titles found in the Windows store will be playable but serious 3D titles will be trouble.

Acer’s Iconia W700 is an interesting take on the PC’s future that can be surprisingly functional despite its unusual design. We used the docked system to write articles, edit photos, and browse the Web, then un-docked it to play Cut The Rope and watch YouTube. Though a laptop or traditional tablet would be better in some situations, the Iconia is good enough in most.

However, there are some problems. Windows 8 isn’t the best tablet operating system, and Acer hasn’t properly thought out certain elements of the dock and tablet. The buttons should be more accessible when the tablet is held in portrait mode, and the dock should allow for one-hand operation and tilt adjustment. Weight and bulk are also an issue.

Pricing helps the argument for the Iconia. Acer sells the whole system, dock, keyboard, leather case and all, for $750 with a 64GB solid-state drive. That’s only $50 more than the 64GB iPad and $150 less than Microsoft’s Surface Pro without the keyboard.

We can’t give the Iconia a broad recommendation – there are too many small issues for that – but readers who want to ditch the multi-device lifestyle should give this plucky do-it-all system serious consideration.