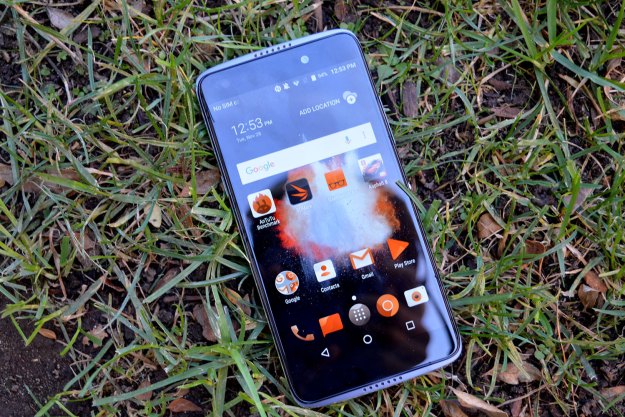 “The Alcatel Idol 5 is a solid midrange phone, but it’s beat out by the competition.”

The midrange handset business is heating up. Alcatel has made plenty of attempts to offer decent phones at excellent price tags – but more often than not it seems like there are better options out there. After recently reviewing the Idol 5S, for example, we found that you were better off going for the Lenovo Moto G5S Plus or Huawei Honor 6X, both excellently-reviewed phones, and top of their price range.

Now, Alcatel is back again with the Alcatel Idol 5, which, unlike naming conventions suggest, was released after the Idol 5S,  and brings a slightly different design along with a few new features – all at the same $280 price tag. Better yet, it’s on sale right now for as little as $150. Even at that price, though, there’s some serious competition – like the Lenovo Moto G5S, and the excellent Honor 7X. We put the Idol 5 to the test, to see if it can lure budget smartphone fans away from Motorola and Huawei.

Good design with a few quirks

While flagship phones often place an emphasis on beautiful design, midrange devices are generally more functional than beautiful. Thankfully, however, the Alcatel Idol 5 isn’t a bad-looking device – though there are a few design quirks preventing perfection.

The display comes in at 5.2-inches with a 1,920 x 1,080-pixel resolution, and in general use it looks pretty good. It’s quite bright, which means it’s legible, even in direct sunlight. It’s sharp, too, so during day to day use you won’t notice any pixelization – though we’ll take a deeper look at that when we examine the phone’s VR capabilities.

The design of the Idol 5 is unique, and in this case that’s not a bad thing. It’s unique because of things like the metal frame, which curves over the top and bottom of the phone and houses components like the loud, clear dual front-facing speakers. It’s the same overall look you’ll find in the Idol 5S and the Idol 4S before it – and we like it.

Unlike the Idol 5S, the phone is made largely from metal. That means that in a battle against the pavement the phone is likely to fare a little better than its glass-backed predecessor, though we did like that the glass back helped give the Idol 5S a little more sheen and prestige. Also on the back is a camera and flash, both in the top left-hand corner, and the Alcatel and Cricket Wireless logos, along with two antenna lines that curve around the top and bottom of the phone, iPhone-style.

The Alcatel Idol 5 isn’t a bad-looking device – though there are a few design quirks preventing perfection.

Buttons and ports are somewhat uniquely placed as well, and that presented a mixed bag of experiences. On the left of the phone is the power button, and the downside of it being placed there is that it’s easy to accidentally hit the volume rocker with your thumb while you press the power button with your pointer. You’ll also get Alcatel’s programmable “Boom Key,” which was previously only found on the Idol 4S, and can be programmed depending on what you want to use it for.

On the bottom is an off-center USB-C port and a headphone jack. The port being off-center looks slightly awkward and actually presented some functional issues – like the fact that the port was covered up when in my car phone mount, so I couldn’t plug it in. Having the port on-center may not be unique, but sometimes there are good reasons for everyone doing the same thing.

There is one thing missing here and that’s a fingerprint sensor. Unlike other great phones in this price range, you’ll have to use your PIN code to access the phone, which may be a little frustrating for some.

Overall, the phone looks good. It’s not flagship-quality design, but it’s also not an ugly device by any means. Still, we would have liked the power button to be in a more helpful location, and the USB-C port to be centered along the back.

A fingerprint sensor would have been nice too – and the lack of one puts other midrange phones, like the Moto G5S Plus and Honor 7X, ahead. There’s also no water-resistance – though that’s to be expected in this price bracket.

Decent specs to handle the day-to-day

Under the hood, the Idol 5 offers a MediaTek MT6753 chip coupled with 3GB of RAM and 16GB of internal storage – specs that may be a little limited, but are powerful enough to handle most every-day tasks with ease. It is interesting that Alcatel has chosen to go for a MediaTek chip here – the previous Idol 5 and the Idol 4S both offered processors from Qualcomm, and most competitors also stick with the Qualcomm 600-series, save for the Honor 6X which uses a Huawei-built Kirin 655 chip.

In any case, the phone’s Android 7.0 operating system is generally responsive and smooth. The basic user interface is quick and snappy, and while there were some stutters and even an app crash when playing Asphalt 8, in general issues were uncommon.

Now, day to day use is more important than benchmarks – but benchmarks still serve a purpose in indicating how long a phone might last. Just because a phone can handle apps now, that doesn’t mean it’ll be able to handle them tomorrow. Here are the results it achieved in benchmark tests:

These scores aren’t going to take out a flagship chip, but they’re certainly not bad by any means. They’re more or less on par with the Lenovo Moto G5S Plus, which scored slightly better on AnTuTu’s test, but slightly worse on GeekBench 4 and 3DMark Slingshot. The Honor 7X also managed a slightly higher AnTuTu score of 63,311.

Simple software with some bloatware

Specs aside, the overall software experience on this phone is pretty good – though you will have to put up with some annoying bloatware. The phone ships with Android 7.0 Nougat, and while things like icons have been changed a little by Alcatel to better suit Alcatel’s design, in general everything is pretty much where it would be on a Google Pixel.

One cool feature that we enjoyed was the pre-loaded Color Catcher app, which allows you to take a photo of your surroundings, after which the device will change the color of all your apps to match that color-scheme. Everything from app icons to wallpaper are changed – including the icons of third-party apps.

As mentioned, there are quite a few pre-loaded apps on the phone that you may not want. Thankfully, many of them can be uninstalled if you so choose.

Virtual reality features leave a little to be desired

A big part of what makes this handset so interesting is that you can get an optional VR headset with it, and while it’s nice that there’s such a low-cost option for basic virtual reality, the experience isn’t great. Alcatel has quite obviously attempted to create an environment like Google Daydream – but don’t expect the same quality. The display isn’t good enough to offer a solid experience, and moving your head will result in quite a lot of image blur. There’s no remote either – you control the experience through two buttons on the top of the headset.

What does make the headset unique, however, is the fact that it incorporates some mixed reality features. There’s a pass-through camera mode, which basically just uses the camera to see your surroundings. There is some lag, so you should probably still take things slowly when you’re using it – but it was an interesting experience.

Safe to say, you won’t buy this phone solely for its VR features – but if you’re getting the phone anyway then it may be a nice bonus.

When we reviewed the Lenovo Moto G5S Plus, one of our main issues was that the camera left a lot to be desired – and that’s an area where Alcatel seems to have picked up a lot of slack. It’s not going to blow any minds, to be sure, but in this price range it’s not a bad camera at all.

When taking basic photos, colors were bright and vivid, and detail is pretty good – provided there’s enough light for those shots. We found that the camera struggled in low-light situations, and often those situations provided at least slightly blurry shots.

The camera app is very capable. It offers a manual mode with the ability to tweak things like exposure and ISO, and even save photos in RAW JPG, though if you’re intimidated by all the options you can simply use auto mode, which provided decent results most of the time.

Video recording was fine too – though again, not overly exciting. Video can be recorded at 30fps, though there’s also a slow-motion mode and a panorama mode to capture 360-degree photos.

The battery life on the phone is fine, but it could be a lot better. It was able to get us through a day of medium-heavy use – but only just, and some might find that they need to charge the device before the day is over. Thankfully the phone supports MediaTek’s Pump Express 2.0, which should help charge your phone relatively quickly.

The Alcatel Idol 5 has been available for some time now, but it’s only on Cricket Wireless. The phone comes at $280 – though for the holiday season it has been put on sale for a tiny $150 if you transfer over your old phone number, or $170 if you don’t.

When it comes to warranty, the phone is covered for a year for manufacturer defects. In other words, if you accidentally drop the phone in the bath, you won’t be covered.

The Alcatel Idol 5 is an excellent option for those looking for a good phone under $200. Unlike some of its competition, the device offers a decent camera – a feature that most budget handsets seem to ignore in favor of things like battery life. It’s also VR-compatible, and while the virtual reality experience here certainly isn’t the best, it’s a nice bonus nonetheless.

Of course, there’s some serious competition here. The Lenovo Moto G5S Plus, for example, offers a better battery, larger display, and a more stock software experience. At the same price, we would argue that it’s the better option.

That depends. If you’re looking for a more well-rounded phone that should get anyone through the day, then the Lenovo Moto G5S Plus is the best option. If, however, the camera is the most important feature for you and you’re on a budget, then the Alcatel Idol 5 may be right for you.

If you’re willing to shell out a bit more cash, then we strongly recommend the $350 HTC U11 Life, which offers plenty of modern features, IP67 water-resistance, and better performance. The Honor 7X, at just $200, is also a worthy competitor.

The Alcatel Idol 5 should last a two-year upgrade cycle, but you will want to be careful with it. There’s no water resistance to speak of here, and a case is always a good idea for those accidental drops.

No. There are better phones for the same price – like the Moto G5S Plus or the Honor 7X.