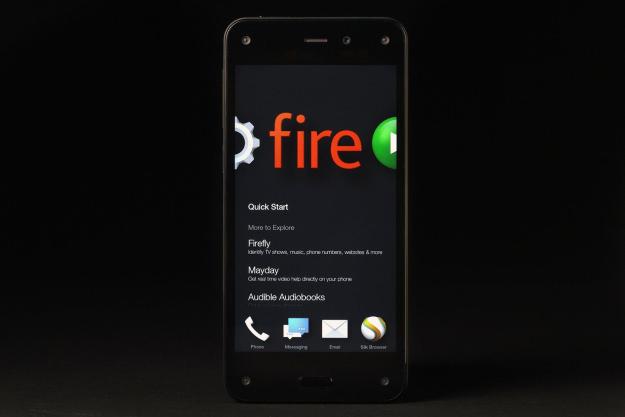 “The Fire Phone looks like a black version of the upcoming iPhone 6, and its crazy features work, but we’re not sure it outshines Samsung, Google, or Apple’s phones.”

Amazon has made its own e-readers, tablets, set-top boxes, and now its very first phone. Those other devices have fared well, but does Amazon have what it takes to build the device you use more than any other? We’ve used Amazon’s phone for a couple weeks now, and our opinion has changed a few times, but we think we have the answer.

Bucking the trend toward bigger and bigger phones, Amazon stuck with a 4.7-inch screen for the Fire Phone, which makes it feel positively small after handling Samsung’s Galaxy S5 or LG’s G3. It will fit well in most hands, and for those more accustomed to the iPhone’s 4-inch screen, the Fire Phone will be a lot more comfortable (size-wise) than most high-end Android phones. The smaller size also effectively disguises the somewhat low resolution of 1280 x 720 – most people won’t notice.

Amazon’s choice to glue a piece of glass to the back of the phone is puzzling, and dumb.

A rubberized edge surrounds the screen, joined by a single home button like an iPhone or Galaxy phone, and glass covers the phone’s back like an iPhone 4S or Nexus 4 – which is just a silly choice made in the name of design over functionality. The groove between the comfortably tapered rubber edge of the phone and the glass makes it slightly uncomfortable to hold, while the slippery glass also causes it to “phantom slide” when you set it down on smooth surfaces. We’ve watched it almost slide off a desk more than once, which would shatter the front and back.

The Home button is easy enough to press, but to reach the power button on the top left of the phone, you’ll have to shimmy your hand around, making it more likely you’ll drop your $650 new phone. The camera button is also parked uncomfortably close to the volume rocker, which caused us to accidentally trigger it sometimes when we tried to turn the volume down. Hopefully Amazon will think through button placement more next time.

FireOS and using apps on the Fire Phone

If you’ve used a Kindle Fire tablet, the Fire Phone will feel very familiar. The interface is a lot easier to figure out than your typical Android phone, though the iPhone still has an edge. It has a similar full-screen carousel, which lets you swipe through big icons of recently used apps, with each app taking up the entire screen’s real estate as you pass through it. There is a single row of four apps at the bottom (customizable) that, when swiped up, reveal a full-page view of apps. Even the settings page has been streamlined with a simple expanding text menu that eliminates the flood of icons found in basic Android. It looks great, though the shadows and icons could use some work.

If you do get stuck, Amazon’s unique Mayday service allows you to summon a remote support specialist in just seconds – and it actually works. The rep we talked to (named Chase) was very helpful and explained the service to us while drawing a nice happy face on our screen. Mayday can help with any kind of issue, and every phone should have it.

White text on a black background gives Fire OS a distinct look, under the fancy makeup the Fire Phone still runs Google’s Android. But Amazon doesn’t let you use the million-plus Android apps in Google’s Play Store. Instead, you get 240,000 apps on the Amazon Appstore. Most of these aren’t custom built for the Fire Phone, which lacks a Back button. So if you need to go to a previous screen in some apps, you just … can’t. Even some of Amazon’s own apps, like the photo editor, have these dead ends. You have to abort the entire app and start over, which is made even more cumbersome by the modified carousel homescreen in Fire OS.

Amazon’s Appstore also lacks some major staples like Google Maps and Gmail. You can of course get your e-mail and maps, but it just isn’t the same.

One of the standout features of the Fire Phone is its ability to display 3D-like images called Dynamic Perspective. Using four Infrared cameras on the front of the phone, it scans your face so that when you tilt the phone, it intelligently moves the screen so that you feel like you’re looking out a window. You can see objects from multiple angles.

It’s very gimmicky, but also very fun to look at 3D objects using the Fire Phone, and we think there are a lot of cool opportunities if game and app developers embrace the tech, and Amazon puts it in Kindle Fire tablets and future phones.

Unfortunately, not many do now. As we mentioned early, very few available apps are even custom-designed to have an on-screen back button (see OS section for more on that), much less 3D graphics or gesture support so you can twist the phone to the left or right to open up menu options.

Amazon’s Mayday service worked for us in seconds, and the rep we talked to (named Chase) was very helpful.

We’ve had no trouble connecting to AT&T’s data network or making or receiving phone calls on the Fire Phone. Everything works as you’d expect, but in-phone performance is another matter. When you boot up the Fire Phone, it lags like an iPhone 4 in 2014, acting sluggish for many minutes, and sometimes the lag occurs when you unlock it from sleeping as well. It makes the phone feel old and crappy.

We’re blaming part of the problem on the phone’s Qualcomm Snapdragon 800 processor, which is last year’s high-end model. Every one of Amazon’s $650 competitors — from the Galaxy S5 to the LG G3 and HTC One M8 — have Snapdragon 801 processors, and that extra digit on the model number does more than just make it faster.

The other giant benefit of the Snapdragon 801 processor is that it improved battery life on phones by 40 percent. The Fire Phone, like the iPhone 5S, will struggle to make it through a day of heavy use, but most high-end Android phones like the G3, GS5, Xperia Z2, and One M8 will make it past bedtime with ease. Battery life is a major issue, so this really hurt our experience with the Fire Phone.

Amazon ripped a page from the iPhone’s playbook by keeping the camera interface point-and-shoot simple, as opposed to the Galaxies and Lumias with their various shooting modes. The Fire Phone has a 13-megapixel rear camera with backside illumination, a LED flash, a 5-element f/2.0 lens, optical image stabilization, and HDR capabilities.

Under adequate lighting conditions, the Fire Phone takes good photos, although colors tend to be on the duller side. If you enable HDR, however, the Fire Phone really brings out the details in dark shadows, but also tends to oversaturate the colors so much that it looks really unnatural. Brown bricks of a building became bright orange, while greens leaves look as if they are glowing. The iPhone and Galaxy S5 generally maintain a more even exposure.

Night shots, as expected, were noisy and blurry, but the Fire Phone tries to keep as much of the details as possible. The flash offered no help, instead imbuing the image with an orangey hue. HDR turned the image into an unnatural abstract painting – fine if that’s what you’re going for, but the best night shot we took was probably the one where we didn’t use HDR or the flash, and that wasn’t very good to begin with. In comparison, the iPhone’s images were a tad better, especially with HDR enabled, but its images, too, were noisy.

Overall, as long as you have a lot of light, the Fire Phone will take good photos that should please most users. We suggest turning off HDR unless you don’t mind the over-saturation to bring out the details in darker areas. Night shots are messy, but that’s a ding against most smartphones.

Amazon has one-upped the competition by offering users unlimited photo backup. Apple starts charging users at 5GB and Google has a hazy 15GB limit, but Amazon has decided that all photos deserve backup. We love it.

The front camera is a weak 2.1 megapixels, but it serves webchats well. Unfortunately, there’s little use for the four additional front cameras, aside from a lenticular mode that you’ll use once or twice. Those cameras are more like sensors rather than image-capture devices.

Amazon’s much-hyped Firefly camera mode is supposed to detect real-world objects and tell you about them (like Google Goggles, if you remember that). Unfortunately, we can’t get it to work with anything that Amazon doesn’t sell … and a lot of things that Amazon does sell. Right now, this is a glorified sales tool for Amazon, and it doesn’t work well.

The Fire Phone is only available on AT&T in the U.S. right now and costs $650 without a contract, or $200 with a two-year contract, which is a steep price for this hardware. And that might be the most puzzling thing about it.

The awesome thing about the Kindle Fire is how affordable it is compared to other tablets with cutting-edge specs for only $230. With the Fire Phone, Amazon has skimped on processing power, but not price tag. It’s difficult to justify spending as much for a Fire Phone as you would a Galaxy S5, when in reality, it’s about as powerful as last year’s Galaxy S4, which is still out and costs a lot less than the Fire Phone.

Amazon’s Fire Phone has a lot of promise, but it’s not ready for prime time yet. If you want to play with a Fire Phone right now, be prepared for a few burns. You’re also probably going to want to upgrade your phone again next year, because the Fire Phone is already behind on battery life and processing power. Give it 12 months and the phone will drive you nuts.

Amazon is going to be a big player in the phone market, but you should give it a year or two so it can work out the kinks with its Fire Phones.

Video-editing app LumaFusion to get a Galaxy Tab S8 launch
Can’t stand using Instagram in 2022? This app fixes everything you hate about it
Google wants you to know Android apps aren’t just for phones anymore
The best ad-blocking apps for Android in 2022
Nreal’s Air AR glasses head to the U.S., ready to rock with iPhones
Pixel Watch design video reveals what Google doesn’t want you to see
The best wireless keyboards for 2022
The best wireless earbuds for 2022
Apple rolls out iOS 16 update to fix frustrating camera-shake, paste bugs
Hey look, the iPhone’s Dynamic Island has come to … Android?!?
Why I stopped wearing my smartwatch — and why I haven’t looked back
How to transfer your SIM from an Android phone to an iPhone 14
Google Pixel Tablet leak reveals key specs about the mysterious device