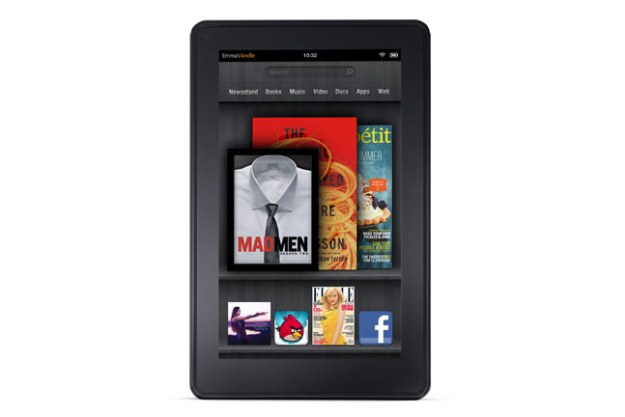 “Amazon has upped its game with the Kindle Fire. The device is the most focused tablet on the market.”

Amazon has made quite a stir with the Kindle Fire, which is expected to be one of the hottest new tech toys this holiday season. Following Barnes & Noble’s lead with the Nook Color, the Fire brings the Kindle e-reader brand to the tablet world, enabling Amazon to bundle its music store, magazine, app store, and video store into one device. Is the Kindle Fire up to the task? Well, yes. Yes it is.

The hardware design of the Kindle Fire is what we’d call “minimal.” We didn’t think it was possible, but it’s simpler looking than an iPad. The Kindle Fire is a 7.5-inch by 4.7-inch slab that’s .45 inches thick. On the front, it has a 7-inch LCD screen; on the back it has a large, embossed “kindle” logo and a nice rubberized black coating.

The Kindle Fire’s default orientation is vertical, meaning it stands up tall, like a book. On the top are two inconspicuous speakers; on the sides there is nothing; and on the bottom there is an audio jack, Micro USB, and tiny power button all huddled together in the center, as if scared that they are the only ports on the whole damn device. They should be scared. If Amazon was going for simple design, it has more than achieved it with the Fire. The next version may not have any ports at all.

Overall, the design is quite similar to the BlackBerry PlayBook, a RIM tablet that failed to take off earlier this year. This isn’t just a coincidence. Amazon’s regular Kindle e-book hardware team (Lab 126) didn’t work on the project. Instead, Amazon outsourced a good portion of the design work to Quanta, the same company that helped design the PlayBook. This was mostly done to get the device out the door this year, and Barnes & Noble made a point to publicly criticize Amazon for the decision, but we don’t really see a problem. The PlayBook is one of the best-designed tablets, and Amazon has fixed its only real weakness by making the power button a lot easier to press.

There are already rumors that a larger Kindle Fire device is on the horizon, and we have little doubt that Amazon will introduce larger sizes going forward, but there’s nothing bad about the first Kindle Fire’s design.

Most tablets coming out range from $300 to $800. Even the new Nook Tablet is $250. Boldly, Amazon has chosen to price the Kindle Fire at $200, which means it’s basically making no money on the device itself. Still, the specs are respectable: The Fire has a 1GHz dual-core TI OMAP 4 processor, 512MB of RAM, 8GB of internal storage, Wi-Fi connectivity, and a 600 x 1024 pixel screen. The screen is bright enough and has a wide viewing angle.

Even with Amazon no making no up-front profit to make a low price like this possible, some sacrifices have to be made. The Kindle Fire does run a dual-core processor, which is nice, but Amazon sacrifices some other features. The tablet needs more RAM, it doesn’t hiccup too much during main use, but when you start digging into the settings, the interface can get sluggish. There is no microSD card, no microphone, no 3G or 4G connection option, no HDMI, and no Bluetooth. SD and Bluetooth support are especially missed. The 8GB of internal storage is okay for now, but with video, MP3s, books, and apps, it won’t be long before users have to pick and choose what items are on their device. Luckily, Amazon makes it easy to see what items are in the cloud and what’s on the device. Bluetooth is commonly used to play music on external speakers, so it’s a shame that the Fire doesn’t support it.

For those afraid that the Kindle Fire is a completely walled garden, we discovered that with a Micro USB cord, you can side-load content onto the Kindle Fire. Oddly, the Fire doesn’t come with a charger that can be used as a data cable. It’s a straight wall charger. We suspect this was another cost saving measure.

The Kindle Fire technically runs on Android 2.3, but you’d never know if we didn’t tell you. This is the heaviest and best Android modification we’ve seen yet. The Kindle Fire is designed like a bookshelf. A cover flow of your recent actions (books read, music listened to, etc.) is prominent, and under it are spaces where you can put some of your “favorite” items.

Unlike every other Android tablet (exception: the Nook Color), Amazon does not leave users with a desktop and no real idea how to use it. Lined up along the top of the interface is a row of sections that explain exactly what the Kindle Fire is made to do: You can select Newsstand, Books, Music, Video, Docs, Apps, or Web and go directly to the respective section. Each section comes with two options: You can check out new items from the store, or you can view the items in your library. The store is pretty straight forward. Amazon has a great selection of material in almost every section of the device. The Appstore is still a bit thin, but it’s great for games (Plants Vs. Zombies, etc.) — we suspect it will fill up fast.

When viewing your library, the Fire gives you another two options: You can view your items in the Cloud, or your items that have been downloaded to the Device. We wish Amazon would make each screen a different color so that it’s easier to tell whether you’re in Cloud or Device, but the concept is solid. Everything you buy from Amazon will be forever available in your Amazon Cloud for that section, and also available outside of the Kindle Fire on the Web and other devices. You are also able to download any books, magazines, albums, or whatever you want onto the Kindle Fire itself as well, enabling it to be useful even if you’re in an area without Wi-Fi.

Simply put, this is a rewarding interface that gets a lot of things right. From the moment you turn on the Kindle Fire, it guides you and explains exactly how to get on Wi-Fi and use the interface. Smartly, Amazon also hides the Android notification bar until there is a relevant notification to give, and has put a slide-down quick settings menu in the upper right, letting you quickly toggle volume, brightness, screen orientation, Wi-Fi connectivity, syncing, and other items. You can dig deeper into settings if you’d like, but most users won’t have to mess around with it.

Amazon’s Silk Browser is also new. The company claims that it speeds up browsing by offloading some of the complexity of Web pages to Amazon’s servers. The browser has worked fine, but we haven’t noticed any great increase in speed or reliability. The tabbed format is nice, but the lack of RAM can slow down your tab flipping a bit. Overall, it is a decent browsing experience, and mostly comparable to other tablets.

There is no calendar that we can find on the Fire, but there is an email client. We hooked it up to our Gmail account and it worked okay, but you can tell that email is not Amazon’s forte. The email app is sluggish and has some odd design choices. For instance, when you delete an email, it doesn’t take you back to the inbox. Instead, you are taken to the next email. This is annoying for anyone who likes to keep unread mail marked as unread. Everyone has their own system for dealing with email, but Amazon’s app is a bit restricting. Hopefully some better email clients will come to the Amazon Appstore soon.

Nope! There are no cameras on the Kindle Fire. If photography or video chatting is your thing, this is not the device for you. Like the iPad, we suspect that the next version of the Fire will have a camera. Until then, most people will have to be content with the fact that we hardly use the cameras on these devices anyway.

The claimed battery life of 8 hours seems about right to us. Battery life is about on par with most Android tablets and a bit better than a lot of the 7-inch designs, which often sacrifice battery life for a small form factor. For comparison, the new Nook Tablet gets a bit better battery life at 9 to 11.5 hours, but the difference isn’t huge. Kindle owners will be sad to hear that the beautiful 30-day battery life of an e-reader is impossible to attain on an LCD tablet…maybe someday. In any case, you won’t have to charge the Kindle Fire every day like a phone, but keep that wall charger handy.

Amazon has upped its game with the Kindle Fire. The device is the most focused tablet on the market. Those who purchase it will know exactly what they are getting into and the tutorials and simple interface mean that almost anyone will understand how to use and enjoy the Fire. We’re not sure if Google is entirely happy that Amazon has shunned the Android Market in favor of its own, but is an open-source operating system, so the online retailer can do what it pleases. At a scant $200, the Kindle Fire is a far better user experience than almost any tablet outside of the iPad, and it’s definitely more focused than Apple’s tablet as well. The Kindle Fire is a smaller device and doesn’t seek to completely supplant every other tablet, but it does set the bar much higher.

Google and its partners need to find a better way to explain to users exactly what their tablets are good for, because Amazon is going to sell millions of Kindle Fires doing precisely that. When you buy a Kindle Fire, you’re buying into Amazon’s ecosystem, which is quickly becoming the best and most flexible in the industry.

Topics
Video-editing app LumaFusion to get a Galaxy Tab S8 launch
Qualcomm’s Snapdragon X35 will bring 5G to your next smartwatch
Does the OnePlus 11 have a headphone jack? What you need to know
Does the OnePlus 11 come with a screen protector?
Does the OnePlus 11 have wireless charging? What you need to know
AirPods Pro are back down to their cheapest-ever price
I love (and hate) this stunning iPhone 15 Ultra concept
Samsung Galaxy S23 vs. iPhone 14: Apple’s grip is starting to slip
Strap a Samsung Galaxy Watch 5 Pro on your wrist while it’s $50 off
There’s a huge sale on Kindle e-readers happening today
Going to pre-order the Galaxy S23? Don’t miss these deals
Best Google Pixel Deals: Pixel 7, Pixel Watch, and Pixel Buds
OnePlus wants to tempt you back to Android tablets with the OnePlus Pad