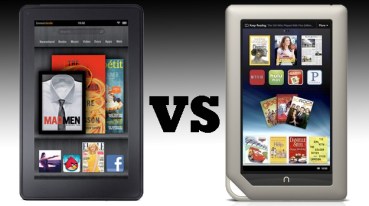 Earlier in the week, when Barnes & Noble unveiled its new Nook Tablet, it proudly announced that Netflix, Hulu Plus and Pandora would come preloaded on the device, pointing out that Amazon’s Kindle Fire would not. But that was then.

On Wednesday, Amazon took some of the shine off Barnes & Noble’s announcement when it released a statement saying that actually the Kindle Fire would be coming preloaded with Netflix and Pandora, together with apps for Facebook, Rhapsody, Twitter, Comics by comiXology, and the Weather Channel, among others.

And now news has come that the Fire will also have support for Hulu Plus, along with ESPN’s ScoreCenter, which allows sports fans to keep track of the latest scores from various sports leagues and competitions around the world.

Support for Netflix and Hulu Plus means Fire owners will be able to choose from thousands of TV shows and movies, alongside what it already offers with its Amazon Prime service. It should also ease some of the criticism Amazon has faced over its largely closed ecosystem.

Those behind the marketing of Barnes & Noble’s new device must be feeling a little deflated by this news, as Monday’s Nook Tablet presentation was keen to highlight the fact that Hulu Plus would be absent from the Fire.

‘Well, at least the Kindle Fire doesn’t have anything like the Nook Newsstand,’ Barnes & Noble executives may have been thinking – until Friday. In a statement on its website, Amazon has just made another Fire-related announcement, unveiling the Kindle Fire Newsstand. Ouch! Amazon’s newsstand will contain more than 400 newspapers and magazines (Nook Newsstand currently offers around 270) optimized for the Kindle Fire, with a free three-month trial subscription of 17 Condé Nast magazines being offered to those who subscribe before March 1.

“The response from publishers has been overwhelmingly positive and they are excited to make their magazines and newspapers available on Kindle Fire, and we’re adding new titles all the time,” Amazon’s Russ Grandinetti said.

How much weight this week’s slew of app-related announcements will carry in the minds of consumers looking at both the Fire and the Nook Tablet remains to be seen. For most, factors such as cost and tech specs will most probably play a bigger part.

Both tablets start shipping next week – the Kindle Fire on Tuesday and the Nook Tablet on Thursday.