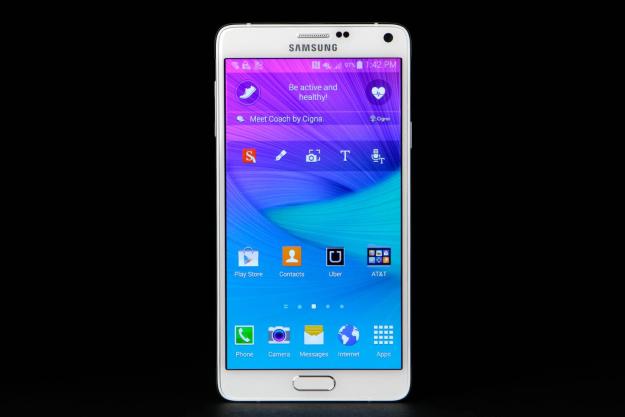 “The Galaxy Note 4 is a shining example of how great a phablet can be. It's one of the best Android phones available today -- if not the very best.”

If you’re reading this, you either like big phones already or you’re phablet-curious — and that’s OK. Everyone is experimenting these days. You don’t have to be ashamed because you like a different kind of phone. Even conservative iPhoners are into phablets now.

If you want an amazing phone, and are leaning large this time around, the Galaxy Note 4 is one of your two best options. It’s never had strong competition before, but this year you can choose between it and a brand new iPhone 6 Plus.

The Note kicked off the phablet trend a couple years ago, but can it hold on to the crown?

Apple may be new to the phablet game, but this is Samsung’s fourth time around the supersize block, and the result is a very comfortable phone, despite its bulk.

I had the usual discomfort when I tried to stretch my fingers to various corners of the screen with one hand, but that comes with any of these big designs. You will get used to the size after a week, and some of you will love it. It would be nice if Samsung included a Reachability feature like the iPhone 6 Plus has, which pulls the screen halfway down so you can easily reach all corners. There are some hidden settings to resize the screen and adjust the position of the keyboard, but none of them work as well as Apple’s elegant solution.

It would be nice if Samsung included a Reachability feature like the .

Samsung’s 5.7-inch screen matches the outgoing Note 3, and slightly edges out Apple’s smaller 5.5 inches, but they’re all pretty close. Though its phones are usually all plastic, Samsung has added an aluminum bumper around the edges with a nice shiny edge to it, like an iPhone 5. That’s not a slight, either. This is the best-looking Galaxy Note yet, and the faux-leather back has much better grip to it than any iPhone.

The Note 4 feels and looks like a premium piece of tech, which isn’t always the case with Samsung phones. We’re very impressed by the new look, though it does come at a cost. Yet again, there is no water resistance in the Note 4. That’s sad. Those hoping for a waterproof design should look at the Galaxy S5.

The Note 3 was a confusing mess of features, but Samsung reigned itself in with the Note 4, focusing mostly on enhancing how you use the S Pen stylus and multitask with apps.

S Pen: If you like styli or have any desire to digitally write or draw on a regular basis, the Note 4 is the only phone for you. When you pop out the S Pen, the Air Command radial menu opens right up, easily letting you select some different ways to highlight text and take screenshots. The Note 4 also feels a little more accurate and faster at writing than the Note 3. Action Memo is the best app, and lets you scribble notes or doodles with fine accuracy. The S Pen makes it easier to select text when you’re typing, and will quickly, accurately convert handwriting to text.

Multitasking: If you enable multitasking in settings, you can run apps either windowed on the homescreen, or in split-screen mode, with one app on the top of the screen and another on the bottom. When you tap the Recent Apps button on the lower left of the phone, it brings up a cascade of apps you’ve recently used. If you touch and hold on the top of any of these apps, it will run windowed on your home screen, where you can drag it around or minimize it into a floating icon. Some apps, mostly from Samsung and Google, have a split-screen icon that will move them to the top of the screen and let you choose which app you want to run in the bottom. Both features work very well.

The Note 4’s Android skin looks and feels very similar to its Samsung brothers. It runs on Google’s operating system (version 4.4) and has access to the Google Play Store for apps. Sixty five bloatware apps pile up to 7GB, but sadly that’s no worse than most phones these days, and you can disable the ones you don’t want to use. Built-in Flipboard support means you can swipe left on the home screen to access Flipboard. It’s a nice touch, but if you don’t like Flipboard, you’re out of luck.

A gorgeous screen and plenty of horsepower

Geeks will argue over whether Samsung’s Super AMOLED screens are better or worse than IPS LCD screens like those Apple uses, but it doesn’t matter. When I looked at the Galaxy Note 4, I had absolutely nothing to complain about, and I have yet to see a pixel thanks to its 2,560 × 1,440 pixel screen, which leads the market alongside LG’s G3. Does it look better than Apple’s 1080p screen? Maybe, but few of you will be able to notice the difference, and the few that do need a better hobby. Bottom line: This is a gorgeous screen.

The Galaxy Note 4 is an up-to-date beast of a phone when it comes to speed. It’s running 4.4 on a powerful new quad-core Qualcomm Snapdragon 805 processor, has 3GB of RAM, and comes with 32GB of internal memory (with MicroSD support). I have yet to encounter any slowdown from it. Samsung has also included a fingerprint reader (which is terrible) and a heart-rate monitor.

The Galaxy Note 4 has a fantastic 16-megapixel camera. Like the GS5, it’s a big step forward from older Samsung phones, and the Galaxy Note 4 has the best camera out there. The image quality we got on most shots was good, but, as usual for a smartphone camera, it couldn’t match the iPhone 6. It can produce pics with more pixels, but they aren’t as beautiful. In most low-light shots, the iPhone 6 produced more accurate, more vivid photos.

Samsung’s photos tend to look more vibrant on the phone when you’re taking them, but on any other device, they’re a little more washed out and thin on detail. But again, this is a great camera. It’s just not the best phone camera.

The front camera captures 3.7 megapixels, which is better than the iPhone’s front cam, but pales in comparison to some newer “selfie” phones. We recommend checking out the HTC Desire Eye if you want the best selfie shots.

Samsung has made no leaps ahead in battery life, but the Note 4 is able to last about a day and a half, which is the norm for big phones these days. The 3,220mAh battery is ginormous and would last longer than last year’s, but Samsung’s new 1440p screen likely drains a lot of the extra juice.

We’ve had no issues hearing or being heard on the Galaxy Note 4, which is par for the course. It supports most wireless carriers, so if you can buy an unlocked version, you can probably get it to run high-speed LTE data on your network.

The Galaxy Note 4 will run you $800, or $300 with a two-year contract on any of the major U.S. wireless carriers. This is expensive, but comparable to the $750 and $300 on contract Apple demands for its . This is one of the most expensive phones around, but it’s also one of the most technologically advanced. You get what you pay for here, but we should tell you that an older Galaxy Note 3 or cheaper device will serve you fine. Even Galaxy S5 phones are getting pretty cheap, and are almost the same. At this price, a Note 4 is a status symbol. Buy it if you need the best, or want that S Pen.

The Galaxy Note 4 remains the shining example of what a great phablet should strive to be. It has all the tricked-out goodies you could want, making it one of the best phones available today, if not the very best. Samsung has refined the feel of the phone, and improved how it handles it size with great multitasking and S-Pen features.

If you’re debating between an iPhone 6 Plus and a Galaxy Note 4, you have a tough decision. Apple has put out a great first phablet, but Samsung shows its strengths in round four. And even if you buy that iPhone, keep in mind that you’ll need to lay down an extra $100 for a decent amount of memory.