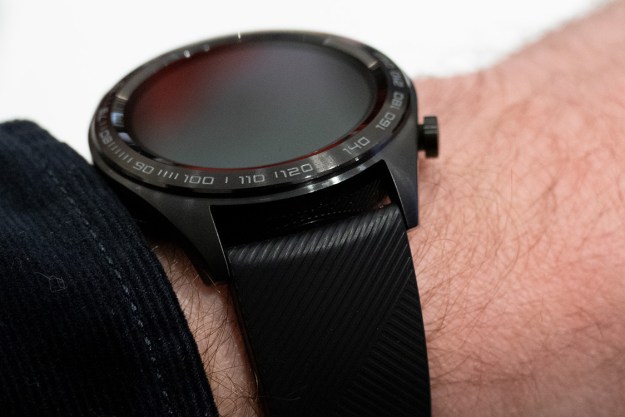 “Honor’s stab at a fitness-focused smartwatch impresses with its compact size and striking colors.”

Watch making is not an exact science. Just because a timepiece has a round face and a strap, does not automatically mean it’s a watch everyone will want to wear. Additionally, while we’re used to touchscreens on smartwatches mostly measuring 1.4-inches, this is not the “ideal” watch size. It’s a technological constraint, and one we’re forced to live with.

The Honor Watch Magic is a perfect example of just how fine the line is between what makes a smartwatch attractive and wearable, and what doesn’t. It’s essentially the same as the Huawei Watch GT in that it has twin buttons on the right-hand side, a heart rate sensor on the back, and is made from a combination of plastic and metal. However, the Watch GT has a larger screen than the Magic Watch, and this makes a big difference in who will want to wear it, and how good it looks when they do.

Honor has used a 1.2-inch, 390 x 390 pixel AMOLED screen on the Watch Magic, rather than the 1.4-inch on the Huawei Watch GT. This is a neat, sleek, smartwatch that fits naturally on the wrist, whatever its size. Because of the reduced body size, the side mounted buttons are also closer together, which helps with the watch’s proportions. Unlike the Apple Watch, the smaller watch face doesn’t look too mini on larger wrists either, showing Honor has got the balance just right. It has also chosen its colors well, with the dark blue model’s wonderful blue bezel a real standout.

The bezel is a nod to chronograph timepieces, and with the numbers around the edge and “Tachymeter” written in the top corner, the Watch Magic takes its design inspiration from the Tag Heuer Formula One. This is a strictly sporty look, which is great for the blue, black, and silver versions, but not so for Watch Dream, the name given to the pink, apricot white, and special red Vivienne Tam edition. These are clearly designed for women, as the straps are smaller than the blue and red models, yet the chronograph style looks a little out of place matched to these colors.

This is a neat, sleek, smartwatch that fits naturally on the wrist, whatever its size.

Elsewhere there are some great design touches. The color-coordinated band around the top button gives it more character, as does the textured edge of the body. We wore the leather and the silicone rubber straps, which were comfortable and attractive, and the 9mm slim profile of the Watch Magic saw it easily slip under our shirt cuff. It’s really light too, at around 32 grams.

The Vivienne Tam model’s leather strap has the brand logo embossed on it, but otherwise the watch appears the same. A double-tour wrap around version of the strap was shown during the presentation, but wasn’t on display for us to see.

Honor has also used Huawei’s Lite OS, the company’s new wearable device operating system introduced on the Watch GT. It seemed to operate slightly more smoothly on the Watch Magic than the GT, sliding between the main screens with ease, although we didn’t use it for long enough to say it’s consistently better than the Watch GT. It operates through swipes to the left and right, and up and down. It’s fast to access the main features, such as the heart rate screen and notifications, but it isn’t a feature-packed piece of software.

Like the Watch GT, the Honor Watch Magic is neither a full smartwatch with Google’s Wear OS, or a hybrid — it’s more closely related to a fitness tracker. That it puts these features inside a more traditional watch design than a fitness band makes it tempting, and there’s no doubt the Watch Magic’s style and comfort makes it wearable everyday. It’s also swim-proof and comes with specific stroke tracking functionality, plus it has built-in GPS, making it versatile for fitness fans too.

Honor says the battery will last seven days with 24-hour heart rate monitoring active, but the Watch Magic and Dream seem to be missing the long 30-day battery life of the Watch GT, presumably as a consequence of the smaller body and screen. This is a shame and while seven days is still better than most touchscreen smartwatches, it’s still not as desirable as 30 days.

Honor has worked its magic

Watches are personal items, and varied styles are essential as one size and shape does not fit all. Shrinking down the Watch GT to Watch Magic size makes it visually more appealing — something we’ve observed before with the Tag Heuer Connected Modular 41 compared to the larger Connected Modular 45 — and the slimmer, lighter body makes it more wearable for more people.

The Watch Magic’s style and comfort makes it wearable everyday.

The decision to just change the strap and accent color for the Watch Dream is an odd one. We’d rather have seen the Dream become its own watch, with its own design, rather than this basic alteration. We’re not sure who will buy the Dream, but applaud Honor for at least making an attempt to vary the Watch Magic’s appeal.

How much will you pay, and where can you buy one? Honor will release the Watch Magic and the Watch Dream in the U.K., France, Germany, Spain, and Italy first, where it will cost 180 euros (around $200). The U.K. price has not been confirmed, but is likely to be around 180 British pounds. This is the same price as the Watch GT. It’s available to buy from January 22. A U.S. release has not been announced.