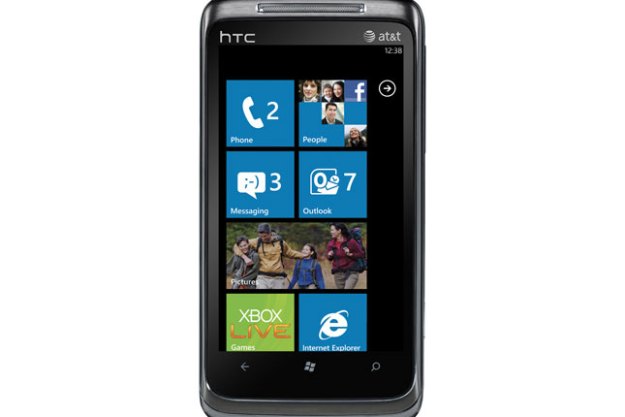 As with any phone featuring a new operating system, one must judge the engine separately from the vessel it moves. In the case of the HTC Surround, the second Windows Mobile 7 phone coming from AT&T sometime in the next couple of weeks, the operating system makes a far more positive impression than the phone. The HTC Surround’s conceit is its slide-up horizontal speaker with a “surround enhancement” button to activate Dolby or SRS surround sound, and a rear kickstand. Whether you consider this addendum useful depends wholly on how frequently you plan on watching video on its 3.8-inch screen. Since it’s hard to imagine using the speakers on a daily basis, it’s also hard to imagine the added weight of the slide being worth the trouble. Unfortunately, the Surround suffers several additional problems, some hardware, some OS.

Windows Phone 7 is the reason anyone will pick up this phone. The OS carries a light touch which belies its sophistication; we find it growing on us despite ourselves. No rigid app icon grid, no restrictive pages, just free-flow scrolling and open-ended home screen icon arrangement, with enough little gentle quirks to actually make the GUI entertaining. It’s nearly fun to explore the inner recesses of Windows Phone 7.

As with all Windows phones, there are three navigation controls on the Surround: back, Start and search. On the base is the microUSB back, up top is the 3.5mm headphone jack and the power button, on the right a solid, nearly flush volume toggle often difficult to control by feel, and the camera shutter button.

With its solid construction, the HTC Surround feels substantial without feeling heavy, but its 5.8-ounce heft is unnecessarily abetted by the horizontal slide-up screen.

What it’s surprisingly missing is an expandable memory card slot. True, iPhones notoriously lack an expandable memory slot, so why should the lack of one here be objectionable? Because nearly all non-iPhone smartphones, and other HTC models, can accommodate additional microSD memory to help boost value to iPhone competitors in dire need of any competitive leg-up.

The Surround’s raison d’être is the slide-up speaker and kickstand. This arrangement would have made more sense on a phone with a larger screen, such as the 4-inch AMOLED display found on the Samsung Focus. Not that the Surround’s screen isn’t bright and crisp – it is – but the slide-up speaker makes the Surround thicker and heavier than the Focus. In other words, the Focus gives larger and brighter video and, since you’re more likely to listen to video via headphones, the slide-up speaker becomes nothing more than a gimmick. Worse, even with Dolby or Surround engaged (and why this wouldn’t be the default – nay, only – setting baffles me), the speaker does not put out enough volume to engage the listener any farther than a foot or so from the screen and then only in absolute quiet surroundings. You don’t even lose a lot of sound when the slide-up speaker is slid down.

WP7 is a bit over-wrought during music playback, with multiple screens available for each track. Oddly, there are no built-in music sound settings. You’ll have to download the separate (and free) HTC Sound Enhancer app to boost bass or choose a preset EQ setting.

The HTC Surround headphones come with an inline mic with track and volume control, but the array is far down the main cord instead of the right earbud cord, and there’s no alligator clip, which means you’ll likely be tempted to upgrade. Be aware, however, that the volume and track controls on inline mics on “Made for iPhone” headphones will not operate with WP7 phones. Also, any “Made for iPhone” headphones connected eliminate the soundtrack to any videos you shoot. Hopefully, there’ll be third-party “Made for WP7” headphones to solve these issues. Although it would be weird to use iPhone headphones on any non-Apple phone, there are sure to be those that will try.

A fun bit: WP7 somehow finds an artist image to display as wallpaper behind the actual album art. Pause a track, and this background wallpaper becomes a moving image on the Music & Video icon on the home screen.

WM7 does suffer some drawbacks, the most surprising of which is the lack of a constant signal strength meter on the home or app screens. You need to actually tap the top of the screen to get this vital information to appear.

Surprisingly, the slide-up screen doesn’t offer nearly the volume of phones with lower aural pretensions on either speakerphone or video playback modes. Call quality, especially on cell-to-cell calls, is crisp and clean, but often warbly.

Without delving into a complete dissertation on WP7, suffice it to say Windows Mobile 7 is a remarkably intuitive and nearly fun OS to navigate. Two major advancements facilitate function. First, icons are large, either square or rectangular and nearly contiguous, which makes them easier to locate than the smaller, widely separated icons on iPhone or Android phones. Second, instead of separate screens to swipe past, both the primary home screen and the secondary screen with all the apps listed each on its own line in alphabetical order, are one long page. No need to remember which “page” a particular app is on, and you are free to populate the home screen with as many or as few regularly accessed apps as you need or want. The large sans serif font also eliminates all search squinting.

Few functions are more than two taps away from the home screen, including the actual phone calling function. The app icons for phone, messaging, e-mail and even the app marketplace clearly indicate the number of messages or updates awaiting your attention.

Since we are dealing with the vagaries of AT&T’s notoriously inconsistent coverage, Web speed is difficult to judge. Even in perfect accessible conditions or when Wi-Fi is available, mobile-optimized pages load comparatively slowly, often taking five seconds or more. But, then, so do the iPhone’s, so this is not necessarily a competitive black mark. And, like the iPhone, WP7 does not support Flash, although this likely is a temporary drawback since Microsoft and Adobe are reportedly in negotiations. However, text on Web pages is often distractingly jagged.

There’s no way to be subtle – the Surround’s camera is awful, made worse by a quirk in the WP7 OS.

First, the good news. You do not need a camera icon pinned to the home screen – pressing and holding the camera shutter key activates the camera from any app or condition, including sleep.

The bad news is plentiful. Operationally, the OS does not remember adjusted camera settings. Resolution defaults are 5 megapixels for still photos, VGA for video. If you choose a lower resolution for stills or the higher HD resolution for video for a particular session, the Surround reverts to the default when you leave the camera app. Each time you activate the camera, you must re-adjust the settings. Since we’ve never encountered this quirk before, we did not discover it until after I had shot most of the test footage, which is why only one sample is in HD. Ironically, there’s a “Restore to Default” choice in both the camera and video settings.

Hopefully, Microsoft will fix this silly hiccup with an update. What can’t be fixed is the poor image and video quality. Both still images and video are smudgy – there is little to no detail of any kind in outdoor shots bathed in sunlight. HD footage is further debilitated by 15 frames per second frame rates, instead of a full 30 fps. Indoor shots with the flash are a bit sharper, but not by much. Additionally, if you shoot video with any but the included headphones connected, you’ll get no sound on your recording, another oddity we’ve never before encountered.

Even when you share by e-mail, still image resolution is sliced by around a third, another anomaly.

HTC rates the Surround at a below average 4.17 hours of talk time. But after several days filled with intense phone futzing, not once did battery levels fall dangerously low by bedtime.

The HTC Surround’s heft and nearly unnecessary slide-up screen is forgivable, given the phone’s otherwise solid construction. Not forgivable is the Surround’s substandard camera. If you seek an AT&T Windows Mobile 7 phone, the Samsung Focus is the best choice.