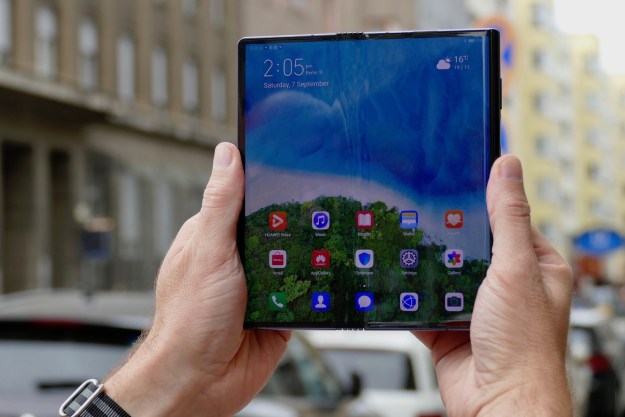 “The Huawei Mate X is the most sensational, and sensationally expensive, piece of new mobile technology we’ve used in years”

I concluded my original hands-on review of the Huawei Mate X by saying, “I’d like another go please,” and now nearly six months later, my wish has been granted. I spent about an hour with the Mate X folding phone during IFA 2019, generally using the software, snapping a few photos, and of course, folding and unfolding the body.

At the same show, just a day earlier, I spent almost the same amount of time with the Samsung Galaxy Fold in its revitalized form, something I hadn’t done when using the Mate X for the first time in late February. It gave me context, and a better ability to compare the first two powerhouse foldable phones you’ll be able to buy in 2019.

Release is getting closer

The Samsung Galaxy Fold is set to be released in the U.S. before the end of September, and in the U.K. on September 18, following an extensive redesign. Huawei says the Mate X has been mostly ready for sale since March, so why hasn’t it been released? Huawei has repeatedly said the wait for 5G and a continued push for developer support have been the main reasons for not doing so. Now, with concerns over the use of Android on Huawei phones, there are even more reasons for holding back.

The latest report says the Mate X will be released in October, with another model featuring the Kirin 990 chip coming later. Both will have a 5G connection, but the exact locations where the Mate X will go on sale is unknown.

A new way of using a smartphone

In March, when I saw the Mate X in the company of Huawei Business Group Chairman Richard Yu, he told me the Mate X had been in development for three years. “It’s the most difficult smartphone project we’ve had,” he said at the time.

It’s an inwardly folding smartphone, so it has one screen that folds to create two, all using an ultra-technical hinge Huawei calls a Falcon Hinge. It’s hidden away from view, but it’s a complex masterpiece of design, with sliding metal panels over the top to keep the rear panel neat and tidy. All this works in harmony to facilitate the phone’s folding action, and how the two panels fit flush together. It’s crucial to the Mate X’s operation, and has been tested to more than 100,000 folds, while the body itself has been through substantial drop tests.

Between the beginning of the year and now, the Mate X has not changed visually at all, although there have apparently been some slight tweaks inside. What’s it like, and how does it all work? There’s no obvious grip point for when you want to unfold it, because the screen folds over on itself, and the edge fits flush with the bar running down the side. To open the Mate X, you press a button on that bar, and the rear screen section pops out, ready for the phone to be completely unfolded. It’s clever, neat, and satisfying.

Closed, the Mate X feels quite thick compared to other modern smartphones, but at 11mm, it’s not obtrusive, nor does it feel like you’re picking up a phone book. The thickness makes it feel a little heavy, but it’s mostly an illusion, as unfolded the Mate X is very light, and almost perfectly balanced. That edge bar really does work for grip, and makes the phone simple, natural, and comfortable to hold in one hand.

The open display is perfect for watching movies, looking at photos, reading books, or general media consumption. Like a tablet though, it didn’t feel natural to do anything like typing while holding it with one hand. Learning new ways to use and interact with a folding smartphone comes with the territory.

The version I used was apparently ready for sale, and the hardware was final. The screen itself does have a noticeable crease running down the fold line, which was more pronounced this time than I remember it being in March. It’s not especially visible, but you can definitely feel it with your finger. It has aslightly crumpled texture, but is not something that would put me off using the Mate X. Running your finger over the screen has a different sensation too, as it’s not made of glass.

Less than 24 hours earlier, I had been using the Samsung Galaxy Fold. I don’t know how old the Mate X I used was, but the Fold was essentially brand new, as it was one that included Samsung’s fixes. The screen still had a crease down the fold line, but it was less pronounced than the Mate X’s, and the overall touch sensation was more pleasing than the Mate X’s — not by much, but enough to make the Fold feel like a true final product, while the Mate X still feels like a first-generation prototype.

While Samsung edged Huawei out here, Huawei gains ground back when the phone is folded. The outer screen on the Fold is for notifications. It’s too small to be used for anything serious, including web browsing or reading long emails. When the Mate X is folded, it’s suitable for just about anything as the screen is as big as the one on your current phone. The Mate X is also more comfortable to hold folded up than the Galaxy Fold.

The Mate X that I tried in March had Google apps installed, but this time I used a Chinese version that did not. While I used Google Maps in March, this time it was Baidu Maps, for example. Earlier this year, the software seamlessly swapped between screens, despite the phone technically only having a single screen. Video playing on the large unfolded screen quickly shifted to the main screen when it was folded up, and then to the rear screen when the Mate X was turned over.

For the most part, the software is still stable and reliable, but as before, there were a few times when it got confused, resulting in stutters and one lockout. Otherwise, it’s speedy and fluid. There are some really neat touches too. The selfie camera screen — it’s the “rear” screen that’s next to the camera lenses — works really well, and the camera viewfinder is massive when the phone’s unfolded. You don’t have to use the tablet view either, it’s perfectly happy being used as a “normal” phone when folded up, and it’s here where the Mate X is the more desirable option over the Galaxy Fold.

The Fold is made to be used unfolded. It’s wonderful that way, but folded up, it’s not such a great experience, due to the large bezels around the outer screen. The Mate X does not have this problem, and using it is like using a normal phone one minute and a tablet the next. The promise of folding phones, delivered, in other words.

New, shiny, exciting things make me go wobbly at the knees. It can’t be helped, and is a sad side-effect of seeing cutting edge tech up close for the first time. What about when Mr. Sensible butts in and forces some critical thinking? Outside of someone who watches hours of mobile video on a very regular basis, is it really any better than having a big-screen smartphone? Yes, but with some reservation. The Mate X’s big screen makes maps great to use and look at, video and photos are pretty to look at — the Mate X’s screen is colorful, sharp, and has excellent contrast levels — and it’s super for multitasking. However, the same can be said for the Samsung Galaxy Note 10 Plus.

Get a  Mate X, and you’ll be the envy of every tech fan out there. Several people looked at the Mate X like it was from another planet when it was used outside, and more than a few did a double-take as they walked past. It will become the center of attention, at least for a while, after its release. However, nothing quells excitement like hearing the object of your desire will cost 2,300 euros, or about $2,600 U.S., to own.

It’s easy to see how and why the Mate X costs so much, and don’t expect that to change in the near future either. In March, Yu said the price of foldable smartphones won’t come down to the more usual flagship smartphone prices for two or three years, due to the complex screen and mechanical technology inside.

Using the Huawei Mate X again was just as exciting as it was the first time, and in a way that new technology needs to be — enticing enough that I still want to try again, and so filled with potential that I’ve since imagined how helpful it could be while using my current phone. Despite having been lucky enough for two goes with the Mate X already this year, I’m still hankering after another, and that’s an extremely positive reaction to cutting-edge tech.