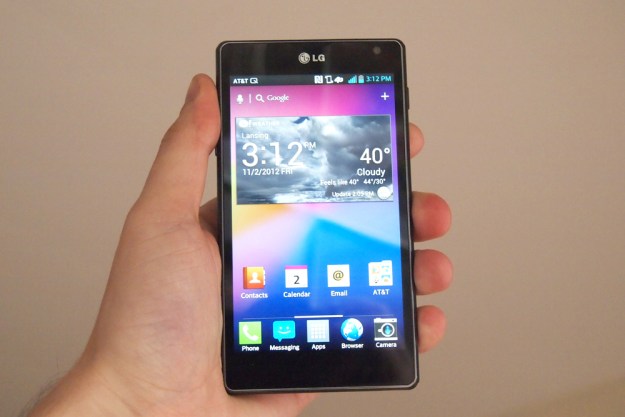 “The Optimus G is an incredibly powerful phone and one of the best devices to come out in 2012, but its user interface is still more forgettable than it is fresh.”

Since the introduction of its Android 4.0 lineup, LG seems to have turned a new leaf. For years, it has struggled to keep up with the phones and marketing muscle of the Apples and Samsungs of the world. Earlier this year, the Optimus 4X HD introduced LG’s renewed focus on high-end handsets. The Optimus G is the company’s first attempt at creating its own dominant flagship device that may develop the following of an iPhone 5 or a Galaxy S3. But is it worth the hype? We were lucky enough to try out a pre-production Optimus G some weeks back and finished units for a couple weeks now. Here’s what we think.

A step up in design and feel

Before we ever turned on the Optimus G, the first thing that drew us in was LG’s enhanced attention to detail. High-end LG smartphones are rarely ugly, but they’re often unremarkable. Even the Optimus 4X HD failed to stand out among its competitors. To a degree, this problem still exists. We’re not sure a regular person will be able to tell the difference between the Optimus G (especially the AT&T version) and comparable phones by HTC and Samsung. But for the first time, LG has a fighting chance. The white Optimus G has a memorable 3D diamond (Crystal Reflection) glass (Gorilla Glass 2) pattern on the back that shimmers and sparkles as light hits it from different angles. It’s quite memorable, and we found ourselves staring at the back of the phone frequently when we were bored.

There are two models of the Optimus G: the model the world and Sprint get, and AT&T’s modified version. Let’s discuss them both.

The global and Sprint version’s overall form is a familiar rectangular with rounded edges, though there are thin silver accents on the buttons. The front of the phone, however, feels entirely different. Due to design constraints, LG has chosen to give even its white Optimus G an entirely black front. If the phone is off, the front looks like a solid black sheet of Gorilla Glass with an impressively thin silver border. Though the front looks entirely black, it hides three light-up haptic navigation buttons (Back, Home, Menu) and an exquisite 4.7-inch screen.

The AT&T version of the phone still has that beautiful 4.7-inch screen, but the rest of its form has been modified to look more like a typical AT&T phone, meaning it’s uglier. It has rounded edges; a plastic insert is in the top and bottom of the phone; and the fine detailing on the buttons is all but missing. It’s not uglier than other phones, but we’re puzzled why AT&T would require such changes. The AT&T version also has an 8-megapixel camera, though the base model has a 13. The only saving grace is that the notification light is actually a ring around the power button. This again, shows the craftsmanship LG is capable of.

A half-step up in UI design

LG’s user interface design in the Optimus G is similar to the Optimus 4X HD; it’s serviceable, but feels a little too familiar to competing devices, at times.

Like most Android manufacturers, LG has tweaked Google’s Android 4.0 operating system to differentiate itself from competitors like Samsung and HTC. Its interface is clean and contains some really fun and memorable flourishes, like its unlock screen, which has you swipe to blow up a bubble portal to your homescreen. The lock screen ripples away with an engaging and, dare we say, magical animation. Unlocking the Optimus G is fun. Other animations are also tucked away in the Settings menu. There are seven animations for swapping between homescreens, as well. We prefer the “Domino” animation, ourselves.

Once you’ve unlocked the phone and flipped through the homescreens, however, the magic sort of ends. The icons look fairly standard and everything works fine — LG has even loaded in some neat small features here and there — but the “wow” factor of the unlock screen is mostly absent. Basically, once you enter, it’s hard to tell you’re even using an LG phone. LG hasn’t even created its own clock and weather widget, instead opting to include generic Yahoo widgets.

The ability to customize your homescreens further by changing app icons is a nice touch, but it’s a passive feature that we doubt many people will even discover. If LG hadn’t told us about it, we never would have known about it. Still, it’s a nice, subtle feature, much like the ability to swap unlock and homescreen animations. The defaults aren’t exciting on the AT&T version of the phone.

LG has stepped ahead of competitors in a few ways. The new QuickMemo feature, for instance, lets you push the middle of the Volume rocker to open up a doodle pad for jotting down notes. With a push of a button, you can start using your phone with the virtual graffiti still onscreen. This is helpful in a few select circumstances, like taking down a phone number really quick or email address. The function worked pretty well, though I had trouble shutting it off — turns out you just have to press the Back button, which isn’t immediately evident.

Another feature, which LG calls “QSlide,” also works well. It lets you make a video transparent and use your phone while it plays in the background. While it’s an impressive technology demonstration (it takes a lot of juice to do both of those things), its use cases are limited to people who A.) Watch a lot of video on their phones, B.) Feel the need to multitask while watching that video, or C.) Always download their video and play it through the default video viewer. YouTube, Netflix, and streaming apps are not compatible. Outside of LG engineers showing the feature to us and wanting to try it out, we had no practical use for it.

Of course, being flashy doesn’t always win hearts. Our favorite feature of the Optimus G may be one of the most important of all: its keyboard. The G’s keyboard feels similar to the iPhone, though it’s much less cramped because of the G’s spacious screen. The keys are easy to hit and typing was a pleasant experience. Outside of the unlock screen, the keyboard is something that continued to draw us back to the phone.

Overall, the main criticism we have of LG is that all of its UI elements seem to be borrowed from Samsung phones like the Galaxy S3 (it even has ripply water sounds) or Apple’s iPhone. The chimera LG has created looks good for an Android phone, but it lacks a unique personality or anything that screams, “This is an LG phone!” We look forward to LG finding its own personality in future user interfaces.

When it comes to power and performance, the Optimus G is tops. It has a 1.5GHz quad-core Snapdragon S4 processor, 2GB of RAM, and 16GB or 32GB of internal file storage with a 16GB microSD card included in the AT&T version.

Having a quad-core processor and 4G LTE is also impressive; the Optimus G is one of the first handsets to pair the two. LTE and voice performance have been great, so far.

The Optimus G represents one of the first times all of LG’s disparate component companies have worked tightly together to make one device, and the 4.7-inch screen is one of the biggest benefactors of the company’s renewed focus. Though other reviewers have pointed out that the HTC One X may still have a better screen, the Optimus G is certainly up there with the best smartphone screens I’ve ever seen. It employs a new “ZeroGap Touch” technology, which eliminates some distance between the glass and the LCD IPS+ 1280 x 768 pixel screen. The screen is dense and comparable to the iPhone’s “Retina” display in many respects, though it doesn’t quite pack as many pixels per inch as Apple’s handset.

In the Quadrant benchmarking test for Android phones, the Optimus G achieved an average score of 6,200. This is greater than the 5,000 average that the Galaxy S3 and HTC One X achieved and the highest score we’ve seen yet. This is a powerful phone.

Another big selling point of the Optimus G is its new 13-megapixel camera (8-megapixel on AT&T). So far, the camera has been hit or miss. Many of the shots it takes are quite good. Outdoor shots, in particular, come out crisp and detailed. And because each image packs in so many pixels (international version), you can zoom in a lot without loss of detail. Close-ups of flowers and objects are particularly stunning. If you photograph an office building, you can zoom in on an individual window.

Still, compared to the iPhone 5, shots still lack balance between different sources of light. The Optimus G doesn’t handle dark areas well and sometimes picks the wrong filter when near a lamp or other light source. The lens on the G takes much longer to adapt to lighting conditions than Apple’s. Compared to other Android phones like the Galaxy S3, LG holds its own. This is a decent camera.

The front-facing camera is 1.3 megapixel.

The battery life of the Optimus G hasn’t been bad, compared to other smartphones, but it’s certainly not good. LG has included a large 2,100mAh battery inside the G, but it’s quad-core processor, LTE antenna, and pretty screen suck up a lot of juice. At times, we had difficulty getting the G to last an entire day on a charge, but we’ll admit that we were using it heavily. There is a “Power Saver” mode that can be turned on, which saves battery life once you reach 30 percent, and a “Quad-core control” option lets you limit the speed of your phone to get better battery life. If these are turned on, battery life can be extended substantially.

Stepping up, but not standing out

The Optimus G is LG’s first big attempt to step up its game and deliver a phone with unique features and highly competitive specs. Unfortunately, it feels like the company is still finding its identity. The Optimus G is an incredibly powerful phone and one of the best devices to come out in 2012, but its user interface is still more forgettable than it is fresh. Anyone who buys this phone will get a top-notch device, but it won’t be the kind of phone that they’ll rave to their friends about. LG has re-entered the ring with Samsung, Apple, and HTC, but it’s going to need its software to stand out if it hopes to make gains. Right now, the Optimus G is more of a merging of good ideas from Samsung and Apple than it is a uniquely LG product. But again, if you’re a Sprint or AT&T user looking for a powerful phone with a decent interface, the Optimus G is a fantastic choice for $200, with a 2-year contract.