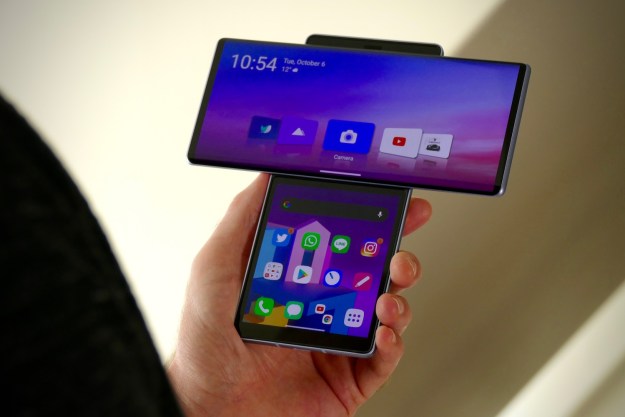 LG Wing review: This novelty can’t quite get off the ground
MSRP $999.00
Score Details

“You won't find another smartphone that looks anything like the LG Wing, and it's a real attention-grabber. However, the swivel-screen struggles to find a way to be useful.”

If the LG Velvet was LG being sensible, then the LG Wing is LG being quite, quite mad. The crazy swivel-screen hardware is totally different from any other phone you can buy, and although it could be seen as a quirky alternative to a folding smartphone, it’s really not.

I’m actually not entirely sure what the LG Wing is. While the hardware is joyous, the software can’t keep up with the innovative design. This means I have found very few reasons to rotate the screen, and that’s a real shame. Let’s go into more detail.

The LG Wing has two screens, with the large 6.8-inch P-OLED main screen swiveling to a 180-degree landscape orientation to reveal a smaller, 3.9-inch second screen underneath. The phone takes on a T-shape at this point, and the result is a phone that you hold naturally with one hand, yet can still watch video in landscape orientation at the same time.

First, the phone is superbly made. Forget about the Wing feeling fragile — it doesn’t. And don’t worry that the rotated screen will break off with regular use either, because it has been tested to 200,000 rotations. The action is delightful, with expertly weighted dampening to slow the screen’s spin. And the hinge is set to the perfect point to take over when you flick it around with your thumb.

The LG Wing is no concept phone. The hardware feels absolutely final and built to last. It’s compliant with the MIL-STD-810G toughness standard and is IP54 splash-resistant (not to be confused with the usual high-end IP68). The shape and in-hand comfort when the phone is folded is reminiscent of the LG Velvet. This is a seriously weighty phone at 260 grams — the Velvet is only 180 grams — and it’s thick, too, at 10.9mm. The result is a phone that tugs your trousers down.

I like the color, called Illusion Sky. The blue shimmers in the light, then morphs into purple, silver, green, and pink at different angles. With the screen rotated, some ergonomic issues make themselves known, mostly with the volume and power keys. These are set too closely to the rotated screen and are very hard to push in this orientation, and the in-display fingerprint sensor is similarly awkward to reach. This is not very helpful should the phone go to sleep, or a video play at an ear-splitting volume. The main screen also takes its smooth curved edges with it when it’s flipped round, leaving the lower screen’s far less comfortable sharp edges for you to grip.

Yes, the phone is natural to hold in T mode, but every time I did so, I questioned whether it was really different than holding any other phone in landscape orientation. Superbly executed and genuinely unusual, the LG Wing is an eye-catching phone that will make people do a double take, but you may end up not using the flip screen all that often.

I love LG’s ideas. Since letting the crazier designers back into the lab following a period of dullness, we’ve had the sleek new Velvet, several Dual Screen phones, and now a swiveling phone. It’s wonderful. However, as cool as the out-there design is, it’s all for nothing if the software doesn’t keep up, or app developers aren’t on board. Like LG’s Dual Screen cases, the current state of the Wing’s app support can’t quite convince me to use the swivel screen more often.

For a new type of phone to be successful, it has to fit into our lives. The Galaxy Z Fold 2 does this very well — because the vast majority of apps work on the large screen straightaway, there was no real period of adjustment. All Samsung’s folding phones make me want to open and close the phone, and much as I want to swivel the LG Wing’s screen, it quite often doesn’t make much sense to do so.

Why? An example is when you come across an embedded video on Twitter. With the phone closed. it plays as normal, and when you swivel the screen. it switches to landscape, but the Twitter app doesn’t automatically appear on the lower screen so you can continue browsing. If you open the Twitter app on the small screen, it pulls the video from the swiveled screen and plays it there instead.

The menu across the swiveled screen shows YouTube as an option, but when you open it up, the display is YouTube in landscape orientation, which is a dire mobile experience. It would have been better to switch this to the portrait lower screen, so when you selected a video, it played on the swiveled screen. It does do this when you use the Naver Whale browser, preinstalled on the phone, when you access the mobile site.

I do like that when you do play a video, controls are displayed on the lower screen, and how the Gallery app shows your chosen photo on the rotated screen. Playing Asphalt 9 Legends shows it has been adapted for the Wing, with a map of the track displayed on the lower screen. And the Naver Whale browser does improve the browsing experience across the two screens, but you will have to adjust to using it rather than your usual browser of choice.

When you get in the flow of using the Wing with a properly adapted app or feature, it’s a glimpse of what the LG Wing could be like with wider app support, but otherwise, it often ends up being a bit confusing and not very user-friendly. The result of all this is I simply used the phone closed, as figuring out what may happen when I did swivel the screen was often impossible. Unfortunately, this rather defeats the objective.

The main camera on the back has 64 megapixels and optical image stabilization, a second camera has 13MP and shoots in wide-angle, and a third camera also has 64MP, but only shoots when the screen is swiveled and is primarily for video. That third camera is rotated to match the swiveled screen’s orientation to shoot in landscape. Very smart. It’s here that LG’s clever digital gimbal system fires up, steadying your shots and allowing for a variety of movements without introducing camera shake or blur.

This feature is probably the most successful on the LG Wing, but arguably it’s usability is not dependent on the screen rotating. The stabilization — which is entirely digital, rather than with hardware like a true gimbal or the Vivo X50 Pro — is very effective, keeping the image steady when walking or running, and when tracking moving objects. Its benefits are really only seen in specific situations, though.

Controlling the camera in gimbal mode is easy, with a precise and responsive virtual joystick and other controls on the lower screen. The LG Wing’s T mode also helps you hold the phone more naturally when shooting and gives you more control over position, just like a real gimbal does — but there’s no reason the technology couldn’t be used on a normal phone too.

Shooting stills with the standard camera shows some great HDR effects and plenty of pop, but the wide-angle camera has a tendency to look rather washed-out and drab. There’s a digital 2x zoom marked in the camera app, and the photos it takes have a decent level of detail despite it not being an optical zoom.

The camera has various gimmicky modes to play around with, too. For example, you can shoot video using the rear and selfie camera at the same time, record audio for ASMR video, and choose from different bokeh effects using portrait mode. Video-editing tools appear on the second screen in T mode, but oddly, there are no tools for editing still photos at all, and the Gallery app opens either Google Photos or Snapseed if it’s installed.

The LG Wing has a Snapdragon 765G 5G processor and 8GB of RAM inside, and Android 10 with LG’s own clean user interface customizations. It’s fast and reliable. Although it’s technically not a flagship, if you use your phone normally for typical apps and communication, and don’t constantly play high-end games on your phone, you probably won’t notice much of a difference between this and one with a Snapdragon 865.

Here are some benchmark results:

This is equal to the OnePlus Nord, and a moderate improvement over the scores achieved by the Velvet and the Motorola Edge, but not as high as the Snapdragon 865-equipped OnePlus 8 or OnePlus 8 Pro. I have not noticed any drastic performance issues, although the animations and switch between screens when you open and close the screen tend to stutter and result in a small delay.

It’s a shame that like the Velvet, the Wing’s screen does not have a high refresh rate, sticking with 60Hz, rather than a clearer, easier-on-the-eye 90Hz or higher. But in the positive column, the 4,000mAh battery lasts an entire day and usually ends up around 30% with a couple of hours video calls included. Without those, it would easily last two days. It supports both Quick Charge 4.0 and wireless charging.

Full details of the LG Wing’s availability will be confirmed after release, but we do know Verizon will sell the phone for $999, and that pre-orders are already live, with a release date of October 15.

The smartphone world would be less interesting if the LG Wing didn’t exist, but this unusual take on the multiscreen phone trend doesn’t captivate like the Galaxy Z Fold 2 or Motorola Razr, due to the software struggling to provide true everyday uses for the innovative hardware. It’s technically very impressive, but when you end up using it like every other bar-shaped smartphone, it’s hard to justify spending $1,000 to get one.

Yes. The LG Wing’s high price hurts it, particularly as there are many excellent midrange phones with the Snapdragon 765G processor out this year, including the new $699 Google Pixel 5, the the $699 Samsung Galaxy S20 FE, the OnePlus Nord, and the Nokia 8.3 5G. If you want to spend $1,000 on a phone, the OnePlus 8 Pro has a far higher specification for the money, and the forthcoming slate of iPhone 12 models are always there if you want something different entirely.

If you want something a little different, the Asus Zenfone 7 Pro’s rotating camera arguably offers more versatility and day-to-day functionality than the LG Wing’s swivel screen, and it has a higher specification for a lower price.

The LG Wing is on paper surprisingly resilient for such a complex piece of hardware. The MIL-STD-810G standard doesn’t make it impervious from harm, but definitely helps keep it safe, plus it has a splash-proof coating for an IP54 rating. There’s even a custom case in the box.

LG’s software updates aren’t as rapid as we’d like, and the Wing launches with Android 10 on board, and with no Android 11 update for the Velvet announced yet, we expect the Wing is likely to wait until sometime in early 2021 to see the new software. The phone does have 5G on board, which adds to its longevity, despite it not being a major selling point today.

There’s no reason the LG Wing won’t last you for the duration of a two-year financing plan, and with luck during that time, LG will make the swivel screen and associated apps more useful.

No. I love the hardware execution, but if all I do is use the phone when it’s closed, it’s not really worth paying extra for the swivel screen in the first place.